You are here: Home › botany › The Phantastic Travels of Adelbert von Chamisso 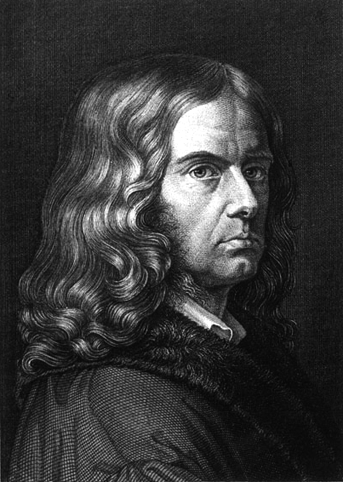 On January 30, 1781, German poet and naturalist of French Origin Adelbert von Chamisso was born. Some of his lyrics, ballads, and romances rank among the finest in German literature. He took part in Captain Kotzebue‘s Russian polar expedition (1815-18) and his 1835 published account of it ranges among the classics of travel. In the same way as Johann Wolfgang von Goethe, one of Germany‘s best known poets,[4] Adelbert von Chamisso was as well a scientist as an author and artist. Today unfortunately, almost all Germans might have heart of Goethe, but only a few are familiar with Chamisso. On the other hand, Chamisso has his own island: Chamisso Island, a small island in Kotzebue Sound, Alaska. While Goethe‘s travels only led him to Italy once in a lifetime or to some Bohemian spas for health treatments, Chamisso as a botanist, travelled to the other side of the world collecting specimens. And as far as I know, Goethe has never written a real science fiction story like Chamisso‘s ‘Peter Schlemihl‘s Miraculous Story‘.

“A person without a shadow should keep out of the sun, that is the only safe and rational plan.”
— Adelbert von Chamisso

Adelbert von Chamisso was born as Louis Charles Adélaïde de Chamissot at Ante, in Champagne, France. Driven out by the French Revolution, his parents settled in Berlin, where in 1796 young Chamisso obtained the post of page-in-waiting to the Prussian queen, and in 1798 entered a Prussian infantry regiment as ensign. He had little education, and while in the Prussian military service in Berlin assiduously studied natural science for three years. In 1803, incollaboration with Varnhagen von Ense, he founded the Berliner Musenalmanach, in which his first verses appeared. Unfortunately, this enterprise was a failure, and, interrupted by the war, it came to an end in 1806. However, it brought him to the notice of many of the literary celebrities of the day and established his reputation as a rising poet. Shortly thereafter, upon the Peace of Tilsit in 1807 signed by Napoleon Bonaparte and Russian Tsar Alexander I, Chamisso‘s family was permitted to return to France. Nevertheless, young Chamisso remained in Germany and continued his military career.

Via France to Switzerland

He had become lieutenant in 1801, and in 1805 accompanied his regiment to Hameln, where he shared in the humiliation of its treasonable capitulation in the following year. Placed on parole, he went to France, but both his parents were dead. In 1808 returning to Berlin he obtained his release from the service. Homeless and without a profession, he lived in Berlin until 1810, when, by intermediation of an old friend of the family, Chamisso was offered a professorship at the lycée at Napoléonville in the Vendée. On his way to France, he joined the intellectual circle of Madame de Staël,[3] one of Napoleon‘s principal opponents, and followed her in her exile in Switzerland, where he devoted himself to botanical research. 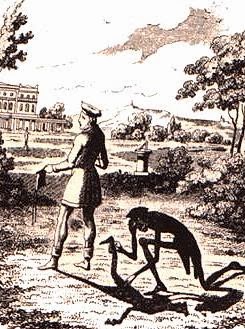 Illustration of Peter Schlemihl, who sold his shadow to the Devil

Don’t sell your Shadow to the Devil

After his return to Berlin, he published his famous narrative ‘Peter Schlemihl’s Miraculous Story‘, about a man who sold his shadow to the devil for a bottomless wallet, which has been translated into most European languages. The story, intended for children, was widely read and the character became a common cultural reference in many countries. People generally remembered the element of the shadow better than how the story ended, simplifying Chamisso‘s lesson to the idiom “don’t sell your shadow to the Devil.“

Scientific Voyage around the World

In 1815, Chamisso was appointed botanist to the Russian ship Rurik, which Otto von Kotzebue commanded on a scientific voyage round the world. His diary of the expedition (Tagebuch, 1821) is a fascinating account of the expedition to the Pacific Ocean and the Bering Sea. During this trip Chamisso described a number of new species found in what is now the San Francisco Bay Area. Several of these, including the California poppy, Eschscholzia californica, were named after his friend Johann Friedrich von Eschscholtz, the Rurik’s entomologist. In return, Eschscholtz named a variety of plants, including the genus Camissonia, after Chamisso. 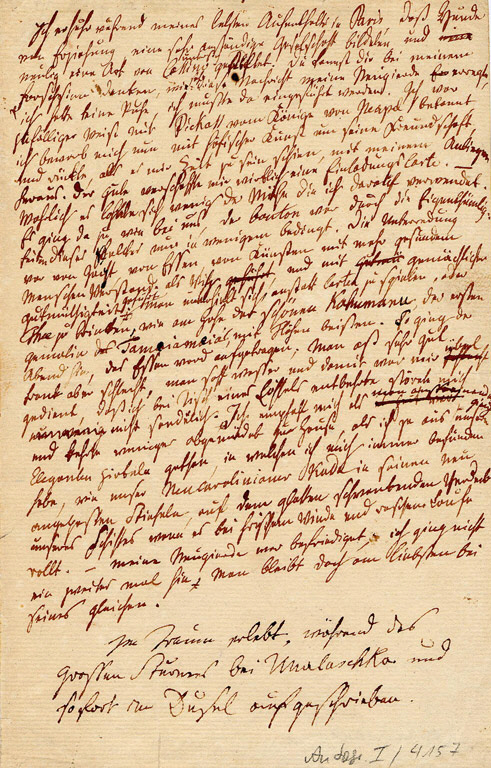 Adelbert von Chamisso, Dream notation with postscript, During the stormy nights aboard the Rurik off Unalashka, April 11-14, 1817.

On his return in 1818 he was made custodian of the botanical gardens in Berlin, and was elected a member of the Academy of Sciences. In 1827, he published Views and Remarks on a Voyage of Discovery, and Description of a Voyage Round the World. Chamisso‘s travels and scientific researches restrained for a while the full development of his poetical talent, and it was not until 1829 that he turned back to literature. In collaboration with Gustav Schwab, and Franz von Gaudy, he brought out the Deutscher Musenalmanach, in which his later poems were mainly published. As a poet Chamisso‘s reputation stands high. Frauenliebe und -leben (1830), a cycle of lyrical poems set to music by Robert Schumann, by Carl Loewe, and by Franz Paul Lachner, is particularly famous. At the time of the Greek War of Liberation, he made himself known in several emphatic ballads as a fervent advocate of Philhellenism.

Chamisso published his first volume of poetry with older poems in 1831. He rarely wrote new poetry. In 1833 he wrote the poem Der rechte Barbier (The righteous Barber). In 1837 he published his previous travel studies on the Hawaiian language. In 1838 he collected donations for “Mutter Schulz“, a Berlin woman in need, with his socially critical leaflet poem Die alte Waschfrau (The Old Laundress, in the second version) and took 150 Reichstaler.