You are here: Home › chemistry › August Kekulé and the Carbon Ring Structure

On July 13, 1896, German organic chemist Friedrich August Kekulé passed away. Being one of the world’s leading chemists of his time, he is best known for devising the ring structure of carbon atoms in organic molecules and became the principal founder of the theory of chemical structure.

August Kekulé was born on September 7, 1829 in Darmstadt as son of a civil servant. After graduating from secondary school, in 1847 he attended the University of Giessen. Because he was a gifted draughtsman and his father was a close friend of famous architects, he began to study architecture with Hugo von Ritgen at the University of Giessen. He then turned to chemistry, however, when he attended lectures by Justus von Liebig.[4] For one semester he was at the Polytechnic in Darmstadt, as his relatives had imposed a period of reflection on his career. Temporarily he attended the University of Paris, where he was a student of Jean Baptiste Dumas and met Charles Frédéric Gerhardt and Adolphe Wurtz. In 1852 he received his doctorate from Liebig with a thesis entitled “On amyloxy sulphuric acid and some of its salts“. He then became an assistant to Liebig’s student Adolph von Planta (1820-1895) in Schloss Reichenau, Graubünden (Switzerland). In 1856 he habilitated in Heidelberg, where he was a private lecturer from 1856 to 1858, during which time he engaged in heated debates with Adolf von Baeyer. In 1858, partly through Liebig’s intercession, he became a full professor of chemistry at the University of Ghent in Belgium and in 1867 he accepted a call from the University of Bonn, where he remained for the rest of his career.

The Theory of Chemical Structure

Kekulé was the principal formulator of the theory of chemical structure and in his work, he was highly influenced by the work of Williamson, Edward Frankland, William Odling, Auguste Laurent, and Charles Adolphe Wurtz. The famous theory covers three main parts, the idea of atomic valence, the ability of carbon atoms to link to each other and the determination of the bonding order of all of the atoms in a molecule. The theory explained by Kekulé, provided a whole new perspective and clarity on analytic and especially synthetic work. Also, this contribution be Kekulé paved the way for organic chemistry. 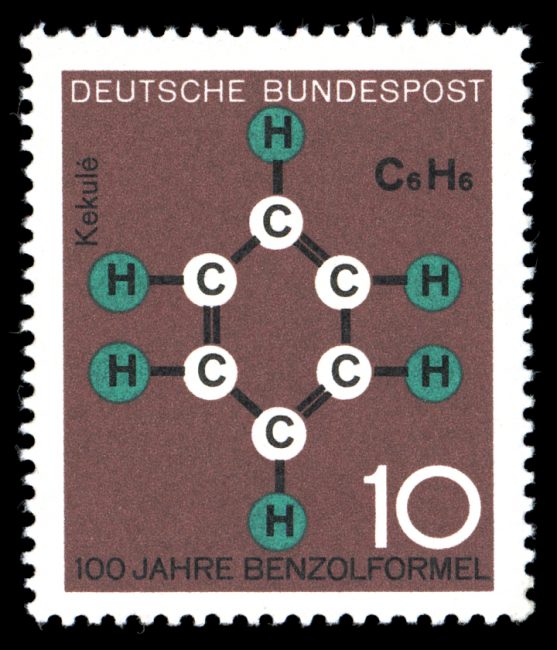 Kekulé’s idea of assigning certain atoms to certain positions within the molecule, and schematically connecting them was mainly based on chemical reactions he observed. One of the main ideas about his structural chemistry was that the number of valences of a given element was invariant. However, numerous exceptions followed and it was then found out that valences were fixed at certain oxidation states. Periodic acid for example could, according to Kekulé’s structure theory, be represented by the chain structure I-O-O-O-O-H. The modern structure of periodic acid has all four oxygen atoms surrounding the iodine in a tetrahedral geometry.

A Snake Seizing its own Tail

To one of Kekulé’s biggest contributions to chemistry belongs his work on the structure of benzene. His first paper on the topic was published in 1865 and in it, he suggested that the structure contained a six-membered ring of carbon atoms with alternating single and double bonds. After this work by Kekulé, a new understanding of benzene, and hence of all aromatic compounds, proved to be so important for both pure and applied chemistry after 1865 that in 1890 the German Chemical Society organized an appreciation in Kekulé’s honor, celebrating the twenty-fifth anniversary of his first benzene paper. There, Kekulé spoke of the creation of the theory and he said that he had discovered the ring shape of the benzene molecule after having a reverie or day-dream of a snake seizing its own tail. This vision, he said, came to him after years of studying the nature of carbon-carbon bonds.

After a measles illness that had seriously affected his health, he turned increasingly to publishing his work. Many of his papers appeared in the Annals of Chemistry and Pharmacy. His most influential work was the unfinished Textbook of Organic Chemistry, whose four volumes were published in 1859 (reprints 1861 and 1867), 1866, 1882 and 1887. Kekulé died in 1896 in Bonn and was buried in a grave of honour in the Poppelsdorf cemetery, where you can still visit his grave today

At yovisto academic video search, you may be interested in a video lecture on Benzene and Aromaticity at the University of Berkeley by Professor Vollhardt.