You are here: Home › astronomy › Friedrich Wilhelm Bessel and the Distances of Stars 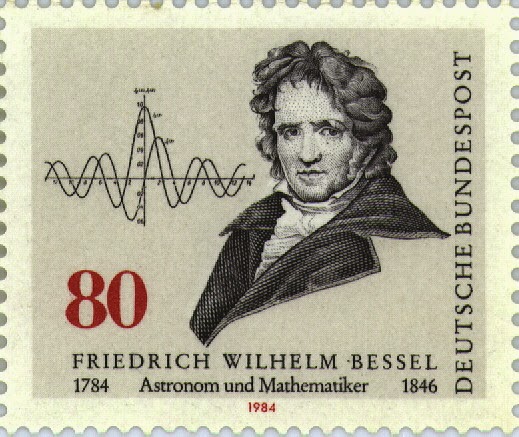 On July 22, 1784, German mathematician and astronomer Friedrich Wilhelm Bessel was born. He is probably best known for his works in mathematics, where he discovered the eponymous Bessel-functions, which are critical for the solution of certain differential equations.

Friedrich Wilhelm Bessel was born in Minden, Westfalia, as the second child of a large family with six daughters and three sons. His mother Friederike Ernestine Bessel née Schrader (1753-1814) was the daughter of a pastor in Rehme. His father Carl Friedrich Bessel (1748-1828) was trained as a lawyer and at that time was employed as a government secretary in the Prussian civil service. Bessel attended the Gymnasium in Minden for four years but he did not appear to be very talented, finding Latin difficult, although he later succeeded in teaching the ancient language to himself. At the age of 14 Bessel was apprenticed to the import-export concern Kulenkamp & Sons at Bremen. At first Bessel received no salary from the firm. The business’s reliance on cargo ships led him to turn his mathematical skills to problems in navigation.

In practice, a navigator is dependent on instruments for measuring elevation angles of stars, which were financially unaffordable for Bessel. With the help of a carpenter and a watchmaker, he built a sextant himself and invented the – later known as – circummeridian method for determining time, using two stars at approximately the same altitude. He made his first measurements on August 16, 1803. When he observed a star occultation at the dark moon limb with his small telescope, he determined the time of the occultation and compared it with data he found in the journal Monatliche Correspondenz and the Berlin Astronomical Yearbook. In this way, he was able to determine the longitude of Bremen himself with only a small error.

In 1804 Bessel wrote a paper on Halley’s comet,[4] calculating the orbit using data from observations made by Thomas Harriot and William Lower in 1607 [2,5]. This brought him to the attention of a major figure of German astronomy at the time, Heinrich Wilhelm Olbers, the leading comet expert of his time.[6] Olbers also lived in Bremen where he practised as a doctor. This gave Bessel the opportunity to make personal contact with Olbers. As a comet expert,  Olbers recognised at once the quality of Bessel’s work and arranged for its publication in the Monthly Correspondence. Subsequently, Olbers gave Bessel the task of making further observations to carry his work further. The resulting paper, at the level required for a doctoral dissertation, was published on Olbers’ recommendation. From that time on Bessel concentrated on astronomy, celestial mechanics and mathematics.

In 1806 Bessel accepted the post of assistant at the Lilienthal Observatory, which gave him valuable experience observing planets, in particular Saturn, its rings and satellites. He also observed comets and continued his study of celestial mechanics. It was not possible for Bessel to receive a professorship without first being granted the title of doctor. A doctorate was awarded by the University of Göttingen on the recommendation of Gauss,[7] who had met Bessel in Bremen in 1807 and recognized his talents. On January 6, 1810, the Prussian King Frederick William III appointed Bessel as the first professor of astronomy at the Albertus University in Königsberg and as the director of the new observatory that was to be built, without having attended the upper classes of a grammar school, passed a school-leaving examination, studied, received his doctorate or habilitation. A simultaneous offer to take over the already existing observatory of the University of Leipzig at considerably worse conditions was rejected by Bessel. Because of his lack of an academic degree, the professors of the Faculty of Philosophy denied him the right to give mathematical lectures, and Bessel ignored the objections and continued his mathematical teaching in the next semester. In order not to let the matter escalate, he finally turned to Gauss, [7] who had met Bessel in Bremen in 1807 , with the request to obtain a degree from the University of Göttingen – which he succeeded in doing: Bessel received the doctorate and master’s degree honoris causa with a certificate dated 30 March 1811. At the Königsberg Observatory he published tables of atmospheric refraction derived from James Bradley’s observations of the positions of 3222 stars made around 1750 at Greenwich (Bradley was English Astronomer Royal from 1742 to 1762), which he had already began in 1807. While the observatory was still in construction Bessel elaborated the Fundamenta Astronomiae based on Bradley’s observations.

Since 1819 Bessel determined the position of over 50,000 stars assisted by some of his qualified students. With this work under his belt, Bessel was able to achieve the feat for which he is best remembered today: he is credited with being the first to use parallax in calculating the distance to a star. Bessel showed in 1838 that 61 Cygni, a star barely conceivable with the naked eye, apparently moved in an ellipse every year. This back and forth motion, called the annual parallax, could only be interpreted as being caused by the motion of Earth around the Sun. Astronomers had believed for some time that parallax would provide the first accurate measurement of interstellar distances — in fact, in the 1830s there was a fierce competition between astronomers to be the first to measure a stellar parallax accurately.

The outbreak of a cholera epidemic in Königsberg led to tumultuous riots in July 1831, in which Bessel was suspected of having contracted cholera by means of silver bullets that had been placed on the observatory to transmit signals. In addition, when the Königsberg city council set up a burial ground for the cholera victims in the immediate vicinity of the observatory, Bessel preferred to seal the observatory and leave the city for two months. 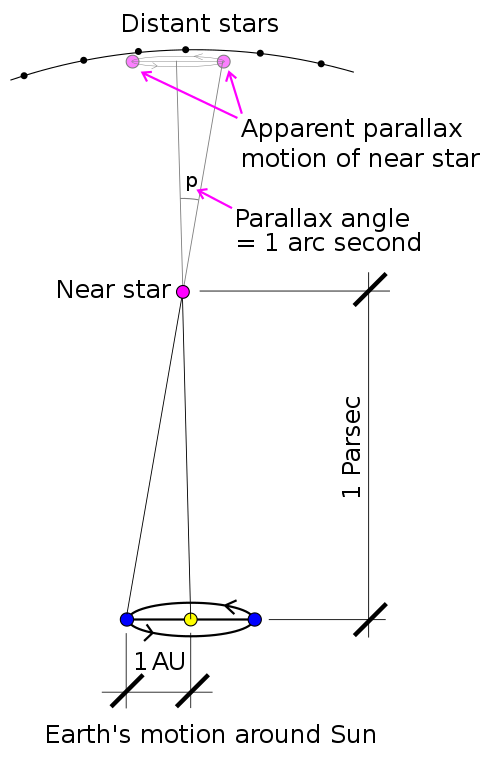 Calculating the Distances of Stars

In 1838 Bessel publicly announced that 61 Cygni had a parallax of 0.314 arcseconds; which, given the diameter of the Earth’s orbit, indicated that the star is 10.3 lightyears away (by today’s measurement of 11.4 lightyears, Bessel’s estimation did only deviate by ca. 10%). Another major discovery by Bessel was that the two bright stars Sirius and Procyon execute minute motions that could be explained only by assuming that they had invisible companions disturbing their motions. The existence of such bodies, now named Sirius B and Procyon B, was confirmed with more powerful telescopes after Bessel’s death [3].

Besides these activities, he was ordered to undertake a geodetical survey of East Prussia (“Ostpreussische Gradmessungen”). From the differences between geodetical and astronomical coordinates, Bessel derived the figure of Earth as an oblated spheroid with ellipticity 1/299.15 (Bessel Normal Ellipsoid). Bessel also contributed significantly to mathematics and invented the so-called Bessel functions (also called cylindrical functions) in 1824.

In 1842, accompanied by his daughter Elise, his son-in-law Georg Adolf Erman and his mathematician friend Carl Gustav Jacob Jacobi,[8] Bessel made his first and only trip abroad, which took him to Great Britain, where he attended the annual meeting of the British Association for the Advancement of Science in Manchester and met numerous scientists such as Brewster, Sabine and Hamilton. Bessel’s health deteriorated so badly that he had to give up his observational and teaching activities from October 1844 and was hardly able to do any scientific work. As a token of his esteem, Frederick William IV arranged for temporary treatment by his personal physician Schönlein. Friedrich Wilhelm Bessel died on 17 March 1846 and was buried in the Scholars’ Cemetery in Königsberg.

The Surprising History of Stellar Parallax, [14]