You are here: Home › aviation › Reaching the Edge of Outer Space – the X-15 Rocket Space Plane 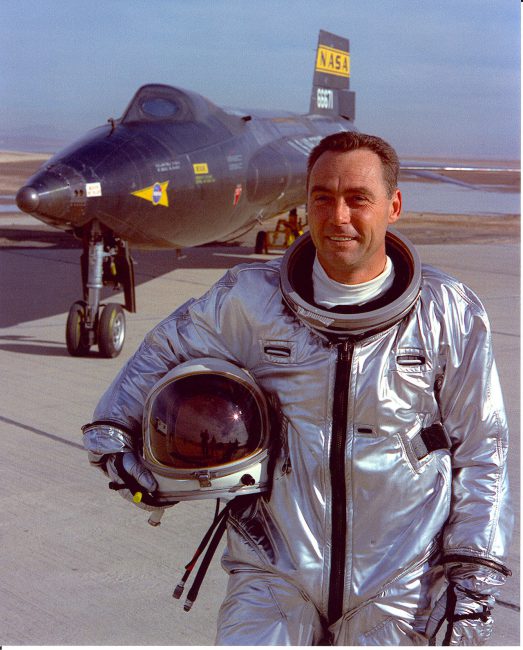 On October 3, 1967, the X-15 rocket plane achieved a world record speed of Mach 6.7, which is 7,274 km/h (4,520 mph or over a mile per second) with U.S. Air Force pilot Pete Knight. As by today, this record still holds for the highest speed ever reached by a manned, powered aircraft. Among the notable pilots of the X-15 was also Neil Armstrong,[4] later a NASA astronaut and first man to set foot on the Moon.

A Brief History of Spaceplanes

In contrast to the space shuttles, the idea of the spacecraft is to be able to take off on a normal runway like an airplane to reach orbit. The main difference to a launch vehicle or space shuttle is that a spacecraft has engines that take in oxygen from the atmosphere (ramjet and scramjet), so that the amount of fuel carried to reach space can be reduced. Various types of spaceplanes have been suggested since the early twentieth century. Notable early designs include a spaceplane equipped with wings made of combustible alloys that it would burn during its ascent, and the Silbervogel bomber concept. World War II Germany and the postwar US considered winged versions of the V-2 rocket, and in the 1950s and ’60s winged rocket designs inspired science fiction artists, filmmakers, and the general public.[5]

The X-15 rocket plane became the world’s first operational spaceplane in the early 1960s. Before 1958, United States Air Force and NACA officials discussed an orbital X-15 spaceplane, the X-15B that would launch into outer space from atop an SM-64 Navaho missile. This was canceled when the NACA became NASA and adopted Project Mercury instead. Then, by 1959, the Boeing X-20 Dyna-Soar space-glider program was to become the USAF’s preferred means for launching military manned spacecraft into orbit.[6] However, the program was canceled before an operational vehicle was built. 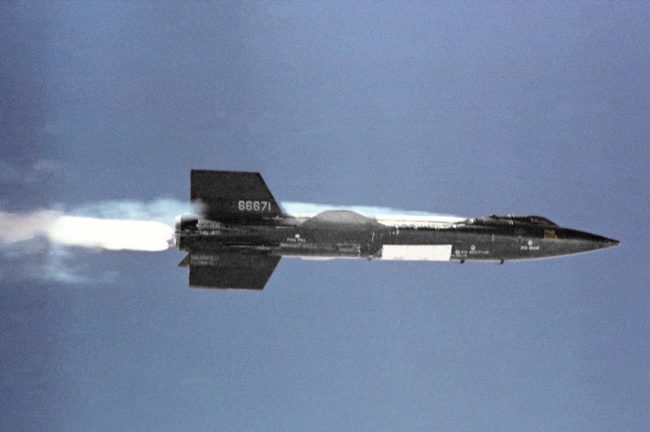 The single-seater aircraft had a number of technical features to cope with the extreme flight conditions. The structure was made of titanium and steel with an outer skin of Inconel-X, which can withstand temperatures of up to 650 °C. The reason for this was that temperature resistance was a greater problem than lightweight construction. The aircraft was launched from the air by a converted NASA B-52 bomber and landed with its own landing gear. In addition to the aerodynamic surfaces for control in the Earth’s atmosphere, a Reaction Control System was also installed to enable maneuverability outside the atmosphere.

In just under 3 minutes, Reaction Motors’ XLR99-RM2 single-chamber, controllable thiokol liquid rocket engine (thrust: 254 kN at sea level, 311 kN at peak altitude) of the X-15A-2 consumed about 15 tons of rocket fuel. This fuel consisted of ammonia and liquid oxygen as well as hydrogen peroxide to drive the high performance turbo pumps which pressed this fuel into the combustion chamber. The rocket plane covered a distance of 450 km in a typical test flight. To prevent it from breaking in mid-air, the maximum loads of -3.0 g and +7.33 g respectively were not to be exceeded during the flight. A white ablative heat protection was applied for the fastest flights.

The rear landing gear was designed in the form of skids due to lack of space and to reduce weight. Otherwise the construction of the missile resembles in many points the German A9, a manned version of the A4, which is not surprising, since the X-15 is based on the concept of a hypersonic research aircraft developed by Walter Dornberger for the NACA. Walter Dornberger was the military director of the Peenemünde V2 program.

In total, three X-15s were built and performed almost 200 test flights. The first flight was a captive-carry unpowered test by Albert Scott Crossfield, on 8 June 1959. Among the first 12 test pilots was also Neil Armstrong, later a NASA astronaut and first man to set foot on the Moon and Joe Engle, later a commander of NASA Space Shuttle test flights. In summer of 1963, pilot Joseph A. Walker exceeded 100 km in altitude, joining NASA astronauts and Soviet cosmonauts as the first human beings to cross that line on their way to outer space. Back then, the USAF awarded astronaut wings to anyone achieving an altitude of 80 km, while the FAI set the limit of space at 100 kilometers.

In 1967, U.S. Air Force test pilot Major Michael J. Adams was killed during X-15 Flight 191 when the aircraft entered a hypersonic spin while descending. The X-15 then oscillated violently as aerodynamic forces increased after re-entry. The airframe broke apart at 18 km altitude. In 2004, a monument was set up near Randsburg, California and Major Adams was posthumously awarded Air Force astronaut wings for his final flight in X-15-3, which had reached an altitude of 81.1 km. The altitude record of the X-15 was however already flown on July 19, 1963 with the X-15 No. 3. It was 107,960 meters.

Spurred on by the Ansari-X Prize, private companies also started to explore the idea of a spacecraft, even if only with suborbital targets. This competition was successfully completed by SpaceShipOne on October 4, 2004. The successor SpaceShipTwo has been performing its first test flights since 2010 and is planned to transport passengers commercially into suborbital space starting in 2014. After delays in development and a crash in 2014, the first test flight into space as defined by the FAA was not made until December 13, 2018.