You are here: Home › space › Neil Armstrong – the First Man of the Moon

On August 5, 1930, American astronaut Neil Alden Armstrong was born, the first person to walk on the Moon. He was also an aerospace engineer, naval aviator, test pilot, and university professor. Armstrong was mission commander of the Apollo 11 Moon landing, in July 1969.[4]

Neil Armstrong was born in Auglaize County, near Wapakoneta, Ohio to Stephen Koenig Armstrong, an an auditor for the Ohio state government and Viola Louise Engel. Already at the age of five, Armstrong experienced his first airplane flight, when he and his father took a ride in a Ford Trimotor. Armstrong attended Blume High School and took flying lessons at the grassy Wapakoneta airfield. In 1947, at age 17, Armstrong began studying aeronautical engineering at Purdue University, funded the Holloway Plan, where he was committed to two years of study, followed by three years of service in the U.S. Navy, and then completion of the final two years of the degree. Armstrong‘s call-up from the Navy arrived in 1949, requiring him to report to Naval Air Station Pensacola for flight training to qualify as Naval Aviator in 1950. Armstrong served in the Navy until 1952 including service in the Korean war where he flew 78 combat missions before he returned to Perdue, where he graduated in 1955 with a Bachelor of Science degree in Aeronautical Engineering.

Armstrong joined the National Advisory Committee for Aeronautics (NACA) in 1955. His first assignment was with the NACA Lewis Research Center (now NASA Glenn) in Cleveland. Over the next 17 years, he was an engineer, test pilot, astronaut and administrator for NACA and its successor agency, the National Aeronautics and Space Administration (NASA).[1] As a research pilot at NASA’s Flight Research Center, Edwards, Calif., Armstrong was a project pilot on many pioneering high speed aircraft, including the X-1B rocket plane, a later version of the first plane that broke through the sound barrier as well as the X-15 rocket plane, which which he made seven flights between 1960 and 1962, reaching a top altitude of 63.2 km and a top speed of Mach 5.74 (6,420 km/h). Over his career, he flew more than 200 different models of aircraft. 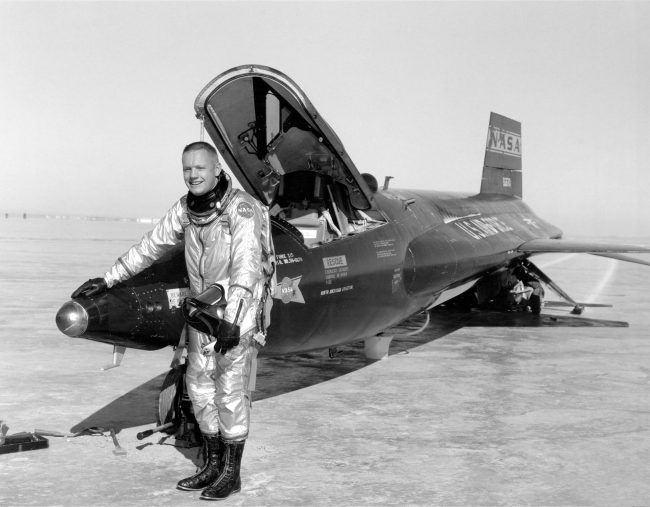 In 1958, Armstrong had been selected for the U.S. Air Force’s Man In Space Soonest program. In 1960, he was chosen as part of the pilot consultant group for the X-20 Dyna-Soar, a military space plane under development. Armstrong transferred to astronaut status in 1962. He was assigned as command pilot for the Gemini 8 mission. Gemini 8 was launched on March 16, 1966, and Armstrong performed the first successful docking of two vehicles in space. After the docking, a rocket thruster malfunction sent the spacecraft into an uncontrolled spin and forced them to separate from the Agena. Armstrong then regained control of the Gemini craft and made an emergency splashdown in the Pacific Ocean.[3]

On July 16, 1969, Armstrong, along with Edwin E. Aldrin, Jr., and Michael Collins, blasted off in the Apollo 11 vehicle toward the Moon. Four days later, the Eagle lunar landing module, guided manually by Armstrong, touched down on a plain near the southwestern edge of the Sea of Tranquillity (Mare Tranquillitatis). At 10:56 pm EDT on July 20, 1969, Armstrong stepped from the Eagle onto the Moon’s dusty surface with the famous words, “That’s one small step for [a] man, one giant leap for mankind.”.[3] For about two and a half hours, Armstrong and Aldrin collected samples and conducted experiments. They also took photographs, including their own footprints. Returning on July 24, 1969, the Apollo 11 craft came down in the Pacific Ocean west of Hawaii. The crew and the craft were picked up by the U.S.S. Hornet, and the three astronauts were put into quarantine for three weeks.

After the Moon Landing

Apollo 11 was Armstrong’s final space mission. He subsequently held the position of Deputy Associate Administrator for Aeronautics, NASA Headquarters, Washington, D.C. In this position, he was responsible for the coordination and management of overall NASA research and technology work related to aeronautics.[1] He completed his Master of Science degree in Aerospace Engineering at the University of Southern California in 1970 and resigned from NASA in 1971. After Apollo 11, he shied away from becoming a public figure and confined himself to academic and professional endeavours. From 1971 to 1979 he was professor of aerospace engineering at the University of Cincinnati, Ohio. After 1979 Armstrong served as chairman or director for a number of companies until his retirement in 2002. He also served on the National Commission on Space (NCOS), a panel charged with setting goals for the space program, and on the Presidential Commission on the Space Shuttle Challenger Accident, the group appointed in 1986 to analyze the safety failures in the Challenger disaster. He was awarded the Presidential Medal of Freedom in 1969.

Neil Alden Armstrong passed away on Aug. 25, 2012 following complications resulting from cardiovascular procedures. He was 82.

At yovisto you might watch some footage of the first lunar landing.