You are here: Home › space › Walter Dornberger and the Spaceplane 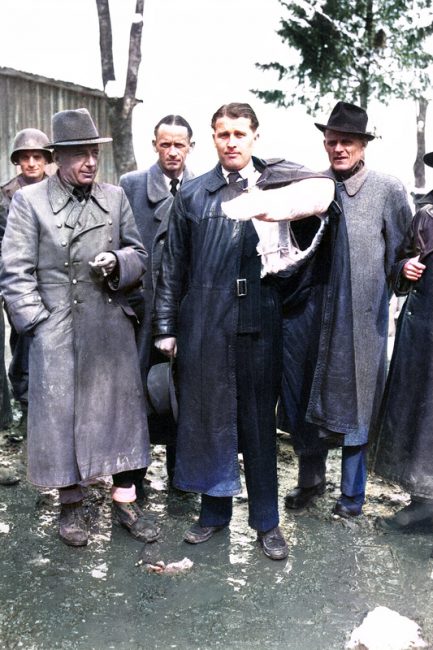 Walter Dornberger (on the left, with hat) together with Wernher von Braun, after their surrender to Allies in Austria, May 1945.

“This third day of October, 1942, is the first of a new era in transportation, that of space travel …”
— Walter Dornberger, speech at Peenemünde 3 October 1942

The Dream of a Space Plane

A spaceplane combines features of an aircraft and a spacecraft, which can be thought of as an aircraft that can endure and maneuver in the vacuum of space or likewise a spacecraft that can fly like an airplane. Dornberger was involved in the development of the X-15, a successfully tested suborbital space plane, as well as in the X-20 Dynasoar project, an orbital spaceplane design that was finally cancelled. Dornberger was born in Gießen to Hermann Dornberger, an apothecary, and his wife Hedwig. At the outbreak of World War I in 1914, he was enlisted as a volunteer and in 1918, as an artillery lieutenant, he was captured by US Marines and spent two years in a French prisoner-of-war camp (mostly in solitary confinement because of repeated escape attempts). In the late 1920s, Dornberger had completed an engineering course with distinction at the Berlin Technical Institute, and in 1930, Dornberger graduated with an MS degree in mechanical engineering from the Technische Hochschule Charlottenburg in Berlin.

In 1935, Dornberger received an honorary doctorate, which Col. Karl Emil Becker arranged as Dean of the new Faculty of Military Technology at the TH Berlin. Already in 1930, Dornberger was appointed to the Ballistics Council of the German Army (Reichswehr) Weapons Department as Assistant Examiner to secretly develop a military liquid-fuel rocket suitable for mass-production that would surpass the range of artillery. Interestingly, this category of weapons was not prohibited by the Versailles settlement. In 1933, Waffenamt Prüfwesen (Weapons Testing) under the Heereswaffenamt (Army Weapons Department), commenced work under the direction of Colonel/Dr. Ing. h. c. Dornberger, where, with Wernher von Braun, he began to perfect the rocket engine.[4]

In 1937, Dornberger and his organization were transferred from Kummersdorf to Peenemünde, where in September 1942, he was coordinating the V-1 flying bomb and V-2 rocket development programmes and directing active operations.[1] The first successful test launch of a V-2 was the third test launch on 3 October 1942.[1] Close to the end of World War II in February 1945, Dornberger and staff relocated his headquarters first to to Bad Sachsa, and then to Oberjoch near Hindelang in the Allgäu mountains of Bavaria.

At an internment camp after the war known as “CSDIC Camp 11” the British bugged Dornberger, who said that he and Wernher von Braun had realised in late 1944 that things were going wrong and consequently was in touch with the General Electric Corporation through the German Embassy in Portugal, with a view to coming to some arrangement. In mid-August 1945, after taking part in Operation Backfire, a British a military scientific operation to acquire German technology, Dornberger was escorted from Cuxhaven to London for interrogation by the British War Crimes Investigation Unit in connection with the use of slave labor in the production of V-2 rockets. He was subsequently transferred and detained for two years at Bridgend in South Wales.

Operation Paperclip and the X-15 Programme

Along with other German rocket scientists, Walter Dornberger was released and brought to the United States under the auspices of Operation Paperclip, and worked for the United States Air Force developing guided missiles. Overall, there were about 120 German rocket scientists working for the U.S., who together with their families received U.S. citizenship. From 1950 to 1965 he worked for the Bell Aircraft Corporation, where he worked on several projects, rising to the post of Vice-President. He played a major role in the creation of the X-15 aircraft. The X-15 was based on a concept study from Walter Dornberger for the National Advisory Committee for Aeronautics (NACA) for a hypersonic research aircraft. X-15 was designed to be carried aloft and drop launched from under the wing of a NASA B-52 mother ship. The X-15 set speed and altitude records in the 1960s, reaching the edge of outer space and returning with valuable data used in aircraft and spacecraft design. The X-15 holds the official world record for the highest speed ever recorded by a manned, powered aircraft. It could reach a top speed of 7,274 km/h, or Mach 6.72.[2] 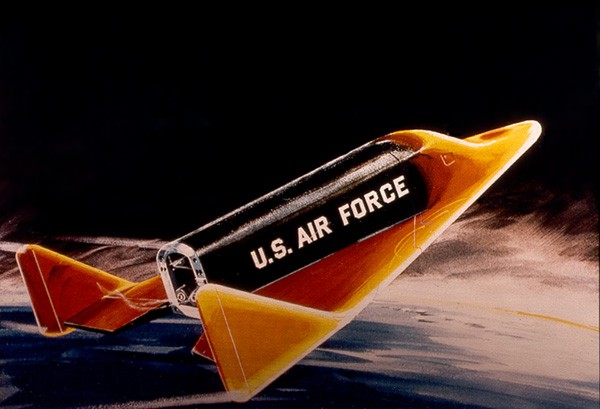 The design of the X-15 as a suborbital spaceplane was followed by the X-20 Dyna-Soar project, of which Dornberger was one of the major consultants, since he had detailed knowledge of Eugen Sänger’s Silbervogel project, a design for a liquid-propellant rocket-powered sub-orbital bomber from the late 1930s. The X-20 was intended as a test case for a spaceplane that could be used for a variety of military missions, including aerial reconnaissance, bombing, space rescue, satellite maintenance, and as a space interceptor to sabotage enemy satellites. While other spacecraft under development in the late 1950s and early 1960s, such as Mercury or Vostok, were based on space capsules that returned on ballistic re-entry profiles, the X-20 Dyna-Soar was more like the much later Space Shuttle. It could not only travel to distant targets at the speed of an intercontinental ballistic missile, it was designed to glide to earth like an aircraft under control of a pilot. It could land at an airfield, rather than simply falling to earth and landing with a parachute. Dyna-Soar could also reach earth orbit, like Mercury or Gemini making X-20 Dyna-Soar a far more advanced concept than other human spaceflight missions of the period. The program ran from October 24, 1957 to December 10, 1963, cost US$660 million ($5.1 billion today), and was cancelled just after spacecraft construction had begun.

Walter Dornberger also had a role on the creation of ideas and projects which, in the end, led to the creation of the Space Shuttle. He also developed Bell’s Rascal, the world’s first guided nuclear air-to-surface missile developed for the Strategic Air Command. During the 1950s he had some attrition with von Braun and was instrumental on grabbing several engineers out of the Huntsville’s team for USAF projects. In 1952 and 1954, Dornberger published his wartime memories in V-2, der Schuss ins Weltall – Geschichte einer grossen Erfindung (V-2, the Firing into Space – History of a Great Invention). Following retirement in 1965, Dornberger went to Mexico and later returned to Germany, where he died in 1980 in Baden-Württemberg.