You are here: Home › medical science › Philip Showalter Hench and the Hormone Cortison 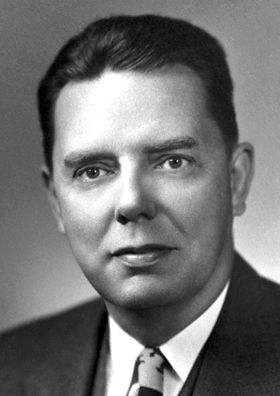 On February 28, 1898, American physician Philip Showalter Hench was born. Hench, along with his Mayo Clinic co-worker Edward Calvin Kendall and Swiss chemist Tadeus Reichstein was awarded the Nobel Prize for Physiology or Medicine in 1950 for the discovery of the hormone cortisone, and its application for the treatment of rheumatoid arthritis.

Philip Showalter Hench was born in Pittsburgh, Pennsylvania, USA, the son of Jacob Bixler Hench and Clara Showalter. After attending local schools he entered Lafayette College, Easton, Penn., where he graduated Bachelor of Arts in 1916. He enlisted in the Medical Corps of the United States Army in 1917 but was transferred to the reserve corps to finish his medical training at the United States Army Medical Corps and the University of Pittsburgh.[1] He was awarded a doctorate in medicine from the University of Pittsburgh in 1920. Immediately after finishing his medical degree, Hench spent a year as an intern at St. Francis Hospital in Pittsburgh, and then he subsequently became a Fellow of the Mayo Foundation, the graduate school of the University of Minnesota’s Department of Medicine, where he became first an assistant, then, three years later, Head of its Department of Rheumatic Diseases. Between 1928 and 1929, Hench studied abroad, at Freiburg University and at the von Müller Clinic, Munich. [1]

In the 1920s, rheumatoid arthritis had yet to be defined, and most acute arthritides were considered to have an infectious basis. The department of rheumatology was regarded as the ‘soft underbelly of the Mayo clinic’. From this inauspicious start, the first step in the development of cortisone was a simple clinical observation. In 1929 Hench noted that the arthritis of a 65‐year‐old doctor started to improve the day after he became jaundiced. The jaundice passed in 4 weeks, but his improvement lasted 7 months. In 1933 he was able to describe in detail seven patients with ‘chronic infectious arthritis’ who improved following jaundice of various causes. By 1938 he had collected a further 31 cases of improvement with jaundice. He observed that the response depended more on the depth of jaundice than its origin and that other conditions, including pregnancy, infection and the postsurgical state, could also lead to temporary remission. Lastly, Hench noted that allergic phenomena were similarly improved.[2] This led him to suspect that arthritis is caused by a biochemical disturbance, perhaps one involving glandular hormones, rather than by a bacterial infection.[3]

Hench’s observations led him to hypothesize that steroids alleviated pain associated with the disease. During this same time, biochemist Edward Calvin Kendall has isolated several steroids from the adrenal gland cortex.[5] After several years of work, the duo decided to try one of these steroids (dubbed Compound E at the time, later to become known as cortisone) on patients afflicted by rheumatoid arthritis. Over the next 15 years, laboratories in the USA and Switzerland (under Tadeus Reichstein) leap‐frogged each other in attempts to isolate and purify the adrenal hormones.[2] Testing of the hypothesis was delayed because the synthesis of Compound E was costly and time-consuming, and Hench served in the military during World War II. The tests were conducted successfully in 1948 and 1949. They showed a remarkable improvement, and cortisone became a key drug in the treatment of rheumatoid arthritis.[3]

Nobel Prize in Physiology or Medicine

Hench, Kendall and Swiss chemist Tadeus Reichstein were awarded the 1950 Nobel Prize in Physiology or Medicine “for their discoveries relating to the hormones of the adrenal cortex, their structure and biological effects.” During his career, Hench was one of the founding members of the American Rheumatism Association, and served as its president in 1940 and 1941. In addition to his work with cortisone, Hench had a career long interest in yellow fever. Starting in 1937, Hench began to document the history behind the discovery of yellow fever.

Hench left the medical corps in 1946 and became expert consultant to the Army Surgeon General, holding the position of Professor of Medicine at the Mayo Foundation until his death. In 1949 Hench was awarded the Albert Lasker Award for Clinical Medical Research. In 1951 he was elected to the American Academy of Arts and Sciences. His leisure time was devoted to music, photography and tennis, and medical history. Philip Showalter Hench died of pneumonia while on vacation in Ocho Rios, Jamaica in 1965, at age 69.