You are here: Home › medical science › The Case of King Tut – CT Scans and DNA Forensics of Tutankhamun’s Mummy

On January 6, 2005, the mummy of Tutankhamun (c. 1355-1346 B.C.) was removed from its tomb in the Valley of the Kings to be subject of a state-of-the-art non invasive CT scan, which gave evidence that the young king had suffered a compound left leg fracture shortly before his death, and that the leg had become infected, and did not support the popular assumption that the king had been murdered.

The Discovery of the Century

Tutankhamun’s tomb was discovered in 1922 by the British archaeologist Howard Carter along with George Herbert, the Earl of Carnarvon.[4,5] The men found the tomb’s content and its structure intact. When Howard Carter discovered the tomb in the Valley of the Kings in 1922, the news spread around the world and sparked great interest, which did not fade for a long time. The tomb, initially declared unopened, was relatively undamaged, as could be seen at the opening of the tomb on 16 February 1923 (opening of the wall between the vestibule with grave goods and the actual coffin chamber with sarcophagus). Tutankhamun, although only an insignificant king, had a rich quantity of precious grave goods. Next to the tomb, the archaeologists found murals painted on the walls and several artifacts including oils, perfumes, toys and jewelry. The stone sarcophagus contained three coffins and the final coffin made of gold revealed King Tut’s mummy which had been preserved for more than 3000 years.

The Death of a Pharao

Since there are no records of Tutankhamun’s final days, his cause of death has been debated for a long time. Harvard microbiologist Ralph Mitchell suggested that Tutankhamun’s burial may have been hurried and that he had even been buried before the paint on the walls of the chamber had dried. There even were speculations that Tutankhamun was assassinated and in 2005, a CT scan was performed in order to non invasively get a clearer picture of King Tut’s death. The scans showed an age of death from 18 to 20 years and corresponded to earlier scientific estimates. The burial date can be limited to the time between mid-March and early May, as flowers have been found as grave goods which only bloom during this time of year. Death must have occurred between the end of December 1324 BC and mid-February 1323 BC, the period of which could be determined by including the seventy-day embalming period. 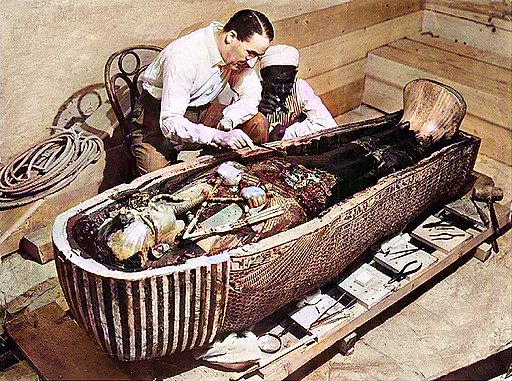 Howard Carter opens the innermost shrine of King Tutankhamun’s tomb near Luxor, Egypt which one of carter’s water boy found the steps down to. (1925)

The CT scans further showed that the king had an infected leg and also a DNA analysis performed five years later showed that he might have suffered from malaria. This led to the assumption that malaria and Köhler disease II together caused his death.

Even though further causes of King Tut’s death were raised by scientists including the sickle cell disease, the research conducted by archaeologists, radiologists, and geneticists, who performed CT scans on the mummy, found that he was not killed by a blow to the head, as previously thought. American egyptologist Bob Brier explained in his book The Murder of Tutankhamen (1999) that death was caused by violent external influences. He assumed an unnatural cause of death. He proved this with ancient x-rays showing an injury to the skull. This was very controversial in egyptology circles, but also among physicians, but it was a misunderstanding: On the x-ray you can see a splintered piece of bone that came loose after death. To general surprise, a hitherto undiscovered femur fracture of the left leg has been detected. Some specialists from the same team also detected a fracture of the left lower thigh, a fracture of the right kneecap and a fracture of the right lower leg. The findings suggest that the fractures were caused by an accident before Tutankhamun died; there were no indications of murder. Most egyptologists now assume that a hunting accident caused the later death of Tutankhamun.

New CT scans also show congenital flaws, which are more common among the children of incest. For instance it is believed that the king had a partially cleft palate. The missing sternum and ribs of the mummy were still present after the recovery of Carter and Carnarvon.[10] A photograph taken immediately before Tutankhamun’s reburial after Carter’s investigations shows the mummy in an intact condition. According to new findings, the damage was caused by grave robbers during the Second World War. The ribs and sternum had to be sawn out in order to access the jewellery, which was firmly attached to the mummy by the embalming resin. The CT examination confirmed this procedure, as no break-offs but smooth separations were found. 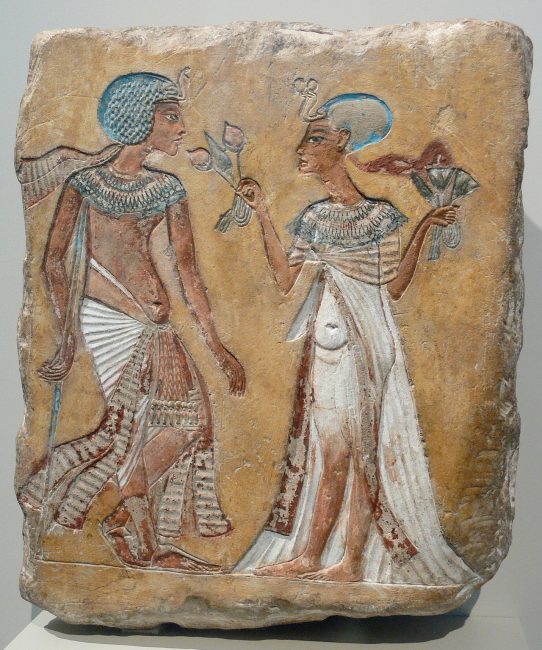 Limestone relief “Walk in the garden” with a representation of Tutankhamun with walking stick and Anchesenamun,

Yehia Gad and Somaia Ismail from the National Research Centre in Cairo conducted further CT scans under the direction of Ashraf Selim and Sahar Saleem of the Faculty of Medicine at Cairo University. They were further consulted by Carsten Pusch of the University of Tübingen, Albert Zink of the EURAC-Institute for Mummies and the Iceman in Bolzano, and Paul Gostner of the Central Hospital Bolzano. Further STR analysis based DNA fingerprinting analysis combined with the other techniques have rejected the hypothesis of gynecomastia and craniosynostoses or Marfan syndrome and even though pathologies including Köhler disease II were diagnosed in Tutankhamun, none alone would have caused death. Also the exact contribution of malaria tropica to King Tut’s death is still debated.

In 2013, a virtual autopsy of Tutankhamun was performed which revealed an injury pattern on the inside of the kings body. Along with the Egyptologist Chris Naunton, car-crash investigatiors simulated chariot accidents and they concluded that Tutankhamun was killed in a chariot crash. However one year later it was revealed that it was rather unlikely that he had been killed in a chariot accident. Scans found that all but one of his bone fractures, including those to his skull, had been inflicted after his death. The scans also showed that he had a partially clubbed foot and would have been unable to stand unaided, thus making it unlikely he ever rode in a chariot. However, it is mostly assumed that genetic defects arising from his parents being siblings, along with complications from a broken leg and his suffering from malaria, together caused his death.