You are here: Home › medical science › Sir Alan Hodgkin and the Giant Axon of the Atlantic Squid 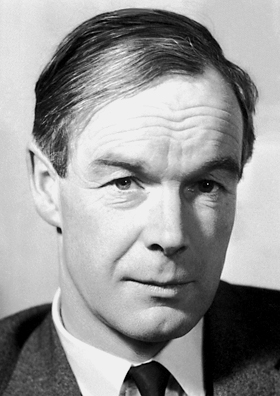 On February 5, 1914, English physiologist and biophysicist Sir Alan Lloyd Hodgkin was born. Hodgkin shared the 1963 Nobel Prize in Physiology or Medicine with Andrew Huxley and John Eccles for the discovery of the chemical processes involved in nerve conduction, more specifically, discoveries concerning the ionic mechanisms involved in excitation and inhibition in the peripheral and central portions of the nerve cell membrane.

“In neurophysiology we have none of those vast tidal waves of discovery which shake the world to its foundations and which have such incalculable consequences for good or evil.”
— Sir Alan Hodgkin From Speech (10 Dec 1963) at the Nobel Banquet in Stockholm, Sweden.

Alan Hodgkin was born in Banbury, Oxfordshire, UK, to George Hodgkin and Mary Wilson Hodgkin. His father died of dysentery in Baghdad in 1918. Hodgkin e was educated at The Downs School near Malvern, Gresham’s School, and subsequently attended Trinity College, Cambridge, where he studied biology, chemistry and physiology from 1932 to 1936. He then became a scientific assistant and carried out experiments with frog nerves. He worked with the scientists Ernest Rutherford and Frederick Gowland Hopkins, among others.[5,6] After an invitation to work at the Rockefeller Institute in New York (1937-1938), he returned to Cambridge, where his collaboration with Andrew Fielding Huxley began in 1939 and where he also found his home.

He volunteered on Aviation Medicine at Farnborough during the Second World War and was transferred to the Telecommunications Research Establishment (TRE) where he worked on the development of centimetric radar, including the design of the Village Inn AGLT airborne gun-laying system. Hodgkin also flew on the test flight of a Bristol Blenheim fitted with the first airborne centimetric radar system.

After the war, he joined the faculty of physiology department in Cambridge University before moving on to Leicester University, where he became chancellor. Along with the English physiologist and biophysicist Andrew Fielding Huxley, Alan Hodgkin developed an action potential theory representing one of the earliest applications of a technique of electrophysiology. It was also known as the “voltage clamp“. Technically, a voltage clamp iteratively measures the membrane potential, and then changes the membrane potential (voltage) to a desired value by adding the necessary current. The method clamps the cell membrane at a desired constant voltage, allowing the voltage clamp to record what currents are delivered. The voltage clamp allows the membrane voltage to be manipulated independently of the ionic currents, allowing the current-voltage relationships of membrane channels to be studied.

The Giant Axon of the Veined Squid

Andrew Fielding Huxley and Alan Hodgkin also used a giant axon of the veined squid, Loligo forbesii. It enabled them to record ionic currents as they would not have been able to do in almost any other neuron, such cells being too small to study using the techniques of the time. The experiments started at the University of Cambridge, beginning in 1935 with frog sciatic nerve, and soon after they continued their work using squid giant axons at the Marine Biological Association Laboratory in Plymouth. In 1939, Alan Hodgkin and Andrew Huxley published a short paper in the journal Nature announcing their achievement of recording action potentials from inside a nerve fibre. The large diameter of the axon provided a great experimental advantage for Hodgkin and Huxley as it allowed them to insert voltage clamp electrodes inside the lumen of the axon. For their work on the squid giant axon, Huxley, and Hodgkin received the Nobel Prize in Physiology or Medicine which was also shared by Australian  John Eccles,  who developed the research, which led to the introduction of new techniques in physiology.

Together with Andrew Huxley, Hodgkin established the propagation mechanism of nerve impulse called “action potentials“, the electrical impulses which enable the activity of an organism to be coordinated by a central nervous system. The Hodgkin–Huxley model, or conductance-based model, is a mathematical model that describes how action potentials in neurons are initiated and propagated. It is a set of nonlinear differential equations that approximates the electrical characteristics of excitable cells such as neurons and cardiac myocytes. They also were able to hypothesize the existence of ion channels on cell membranes, which were confirmed decades later. Hodgkin was also the discoverer of cell membrane depolarisation sequence now known as the Hodgkin cycle.

Hodgkin suffered from a series of medical problems that began soon after his retirement as Master of Trinity. In 1989 he had a surgery to relieve pressure on the spinal cord from one of the intervertebral discs in his neck, which left him unable to walk without support, and with progressive disablement. Sir Alan Lloyd Hodgkin died in 1998 at Cambridge at age 84.