You are here: Home › archeology › Heinrich Karl Brugsch and the Decipherment of Demotic Script 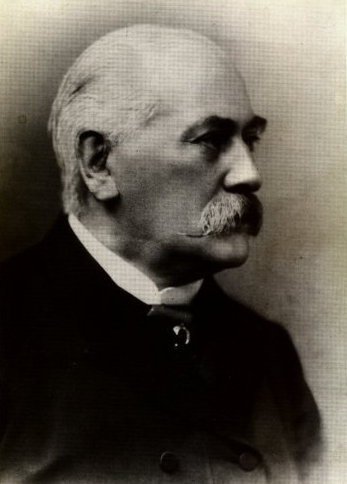 On February 18, 1827, German egyptologist Heinrich Karl Brugsch was born. Brugsch was associated with Auguste Mariette in his excavations at Memphis and pioneered in the decipherment of Demotic, the simplified script of the later Egyptian periods. He also recognized the Semitic side of Egyptian grammar, thus enabling a far more comprehensive and systematic understanding of hieroglyphs.

Heinrich Karl Brugsch was born in Berlin, Germany, as the son of Prussian cavalry officer Ernst Wilhelm Brugsch and his wife Dorothea (neè Schramm) in the barracks at Berlin. His education started at the French Gymnasium in Berlin, followed by the Köllnische Realgymnasium, where he excelled. He early manifested a great inclination to Egyptian studies, in which he was almost entirely self-taught. At the age of 16, he applied himself with success to the decipherment of Demotic, the ancient Egyptian script derived from northern forms of hieratic used in the Nile Delta, and the stage of the Egyptian language written in this script, following Late Egyptian and preceding Coptic. The decipherment of Demotic had been neglected since the death of Francois Champollion [4] in 1832. Brugsch’s decipherment built upon the work of Thomas Young, the English polymath and physician, who made significant contribution in the decipherment of Egyptian hieroglyphs. Brugsch’s work, Scriptura Ægyptiorum Demotica (1848), containing the results of his studies, appeared while he was a student at the gymnasium. It was followed by his Numerorum Demoticorum Doctrina (1849), and his Sammlung demotischer Urkunden (1850). 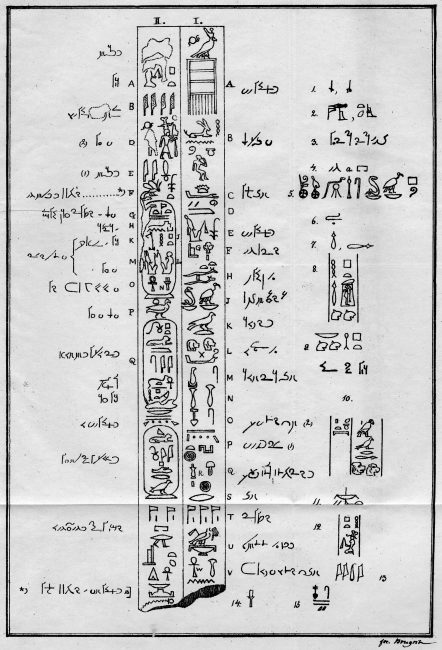 Brugsch’s 1848 work brought him to the attention of Alexander von Humboldt and Prussian King Frederick William IV.[5] After completing his university course, support from the king enabled him to complete his studies with visits to foreign museums at Paris, London, Turin, and Leyden. In 1853, Brugsch was sent to Egypt by the Prussian government in 1853, and contracted an intimate friendship with French egyptologist and founder of the Egyptian Department of Antiquities, Auguste Mariette,[3] who was occupied with excavations at Memphis and whom he assisted in his work. After this he returned to Berlin, where, in 1854, he successfully finished his habilitation and was appointed privatdocent in the University Berlin, and, in 1855, assistant in the Egyptian Museum of Berlin. He visited Egypt again in 1857.

In 1860 Brugsch was sent to Persia on a special mission with the Prussian legation under Baron Minutoli, travelled over the country, and after Minutoli’s death discharged the functions of ambassador. In 1864, he founded the Egyptological journal, Zeitschrift für Aegyptische Sprache in Berlin, which is the oldest still existing journal of Egyptology. In 1864 he was Prussian consul at Cairo. In 1867, he edited his vast Hieroglyphisch-demotisches Wörterbuch (Hieroglyphic Demotic Dictionary), published in four volumes in Leipzig. In 1868 he returned to Germany and was appointed professor of egyptology at Göttingen, and in 1870 director of the Ecole d’Égyptologie, the school of Egyptology, founded at Cairo by the Khedive Ismail Pascha, the Ottoman viceroy of Egypt, where he was accompanied by his younger brother Emil, who also was an egyptologist.

He was soon raised to the rank of bey (1873), the same year he represented Egypt officially at the 1873 Vienna World’s Fair, and some time afterward he was promoted pasha (1881). He also organized an Egyptian exhibit at the Philadelphia Exposition in 1876. From his post as pasha, he was unceremoniously dismissed in 1879 by the European controllers of the public revenues, determined to economize at all hazards; and French influence prevented his succeeding his friend Mariette at the Bulaq Museum in 1883. He afterwards resided principally in Germany until his death in 1894 at age 67, but frequently visited Egypt, and took part in two more official missions to Persia.