You are here: Home › engineering › James Watt and the Steam Age Revolution 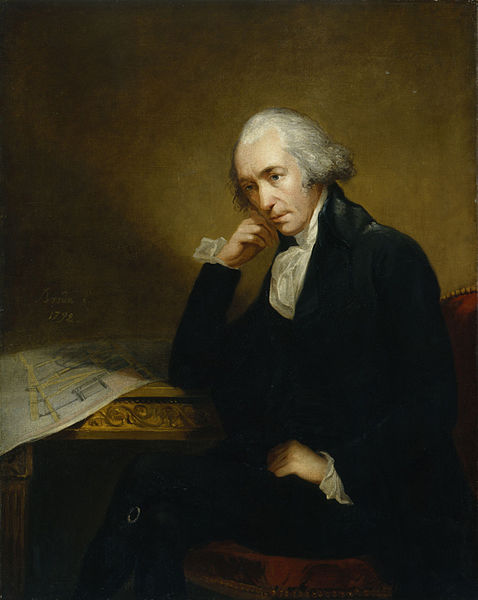 On January 5, 1769,  Scottish inventor, mechanical engineer, and chemist James Watt finally received the patent for his steam engine: patent 913 A method of lessening the consumption of steam in steam engines-the separate condenser.

How to Generate Power

Before James Watt was able to revolutionize Europe’s industries, folks had to find different ways to generate power. While the Romans during the first century BC used undershot water wheels, the Europeans of the Middle Ages improved water power and it was used for forging, sawing or grinding. For places unable to use the flowing water’s advantages, windmills were built but as technological improvements were made all over, these power generators became increasingly inefficient. For many years, various engineers and scientists had experimented with steam. The Greek Hero of Alexandria [5] already experimented with heated water in a sphere during 80 AD, which he attached to “two diametrically opposed, outwardly and tangently extending bent tubes, whose outer ends steam escaped, causing the sphere to rotate.” [1]

Other contributors to the development of the steam engine included the Italian physicist Giambattista della Porta at around 1600, the French scientist Denis Papin 100 years later, and Thomas Savery, who could even get a patent for an idea using vacuum to draw up mine water.[7,8] However, the first usable steam engine was created by Thomas Newcomen, an Englishman, who was able to pump mine water [6]. As Newcomen learned from mine operators their difficulties concerning water flooding mines, he experimented for about 10 years, finding the best solution in a pumping system powered by steam. It revolutionized numerous working processes, but there were still difficulties with his machine, like the piston not fitting in the cylinder and the fact that it was too large and immobile. Also, the machine had a high consumption of coal and while operating, it wasted heat. Through Watt’s improvements on the steam engine, he was able to revolutionize working processes and provided one of the most important sources for the beginning of the Industrial Revolution.

James Watt grew up in a family of educated people and was enabled a decent education from early years. His father was a carpenter and designer of nautical equipment, Watts grandfather was a mathematics teacher and Scottish nationalist. He learned traditional subjects such as mathematics, Greek or Latin, but was also educated in manual skills. Already as a boy he liked to experiment and is said to have researched the function of every object he got his hands on. In addition, Watt was an avid collector of plants and stones, read a lot and invented stories. His first attempts to experiment with steam were made by Watt with only 15 years.

However, his parents were too poor to study medicine, which Watt was interested in. So Watt began an unofficial apprenticeship as a mechanic in London after he could not find a teacher in Glasgow, Scotland. However, as this soon had nothing new to offer him, he broke it off before the end of the prescribed seven years. He was not able to open his own workshop because the Glasgow guilds objected to it because he had not completed his training. In 1757 Watt got a job as an instrument maker at the University of Glasgow. There he manufactured and repaired instruments such as compasses and quadrants for the university.

When John Robinson, a professor at the University of Glasgow started motivating Watt to build a model of Newcomen’s engine, he was unstoppable. When demonstrating his model at the university, James Watt noticed several problems with the machine and began experimenting on its improvement. He found out that the “steam condensed inside the cylinder that was being cooled at each stroke“, which caused the loss of a great amount of heat. [1] After a few years of research and hard work, James Watt was able to build a highly improved engine using the separate condenser, which made the steam engine a lot more efficient and usable.

Watt gave up his post at Glasgow University to devote himself more to the further development of the steam engine. Although he also worked as a field surveyor, he accumulated debts in the following years. He was also often ill. It was not until 1769 that he found a financier in the iron manufacturer John Roebuck (1718-1794) and on 5 January 1769 he filed the English patent no. 913 “A New Invented Method of Lessening the Consumption of Steam and Fuel in Fire Engines“, which was registered on April 29, 1769. Watt’s improvements made it possible to save more than 60 percent of coal compared to the Newcomen steam engine optimized by John Smeaton.[9]

At first it was not possible to produce a steam-tight cylinder. His sponsor John Roebuck went bankrupt over the trials. The industrial baron Matthew Boulton agreed to take over Roebuck’s estate if he could extend the patent by 25 years to 1800. After successful lobbying, Boulton & Watt was founded for the duration of the patent. Boulton secured 2/3 of the income for its share. The first operational steam engine according to the Watt principle was installed in 1776 in the factory of John Wilkinson. Wilkinson’s company had succeeded in producing an iron cylinder of the required quality: He used a process he had developed and patented to drill cannons into iron, in which the drill bit is fixed and the workpiece rotates around it. As a result, ‘Boulton & Watt’ in Soho near Birmingham produced important parts such as condenser and air pump, and the steam engines were only assembled at the customer’s premises.

Watt and Boulton successfully hindered the further development of the steam engine by competing engineers during the period when the patents granted to Watt were valid. For example, they sued Jonathan Hornblower, whose compound steam engine made higher efficiency possible, for patent infringement and were thus able to stop its further development. Manufacturers and businessmen noticed Watt’s efforts and it took only until the 1790’s and his engines completely replaced Newcomen’s. Because of Watt, many mines that were about to being closed came back to life and large scale processes became possible at places unable to make use of water or wind energy. An industry, the engine was at first majorly useful in was the textile industry. It improved Britain’s economic situation, because the textile industry depicted a major part of Britain’s overall production. The usage of Watt’s steam engine expanded globally and advanced industries and economies world wide, paving the way for the Industrial Revolution.

Exploring the Life and Times of James Watt, [11]