You are here: Home › archeology › Howard Carter and the Tomb of Tutankhamun 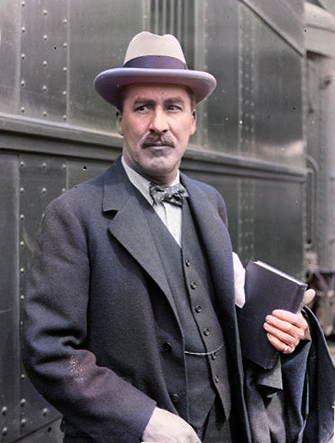 “Here before us was sufficient evidence to show that it really was an entrance to a tomb, and by the seals, to all outward appearances that it was intact.”
– Howard Carter, Diary, 5 November 1922.

Howard Carter was born in Kensington, London, UK, the son of Samuel John Carter, a painter of animals and an illustrator for the Illustrated London News, and Martha Joyce Carter. Because he was frequently ill as a youth, he was partially tutored at home. His father taught him how to draw.[4] Carter spent much of his childhood with relatives in the Norfolk market town of Swaffham, near to the mansion of the Amherst family, Didlington Hall, containing a sizable collection of Egyptian antiques, which sparked Carter’s interest in that subject. At age 17, in 1891 the Egypt Exploration Fund (EEF), Carter to assist an Amherst family friend, Percy Newberry, in the excavation and recording of Middle Kingdom tombs at Beni Hasan.

Carter was innovative in improving the methods of copying tomb decoration. In 1892, he worked under the tutelage of with the famous archaeologist, William Flinders Petrie for one season at Tell el Amarna,[7] the capital founded by the pharaoh Akhenaten. From 1894 to 1899, he worked for Swiss Egyptologist, Edouard Naville, at Deir el-Bahari, where he recorded the wall reliefs in the temple of Hatshepsut. Because of his potential, and probably because of the recommendation of Naville, Gaston Maspero, the head of the Egyptian Antiquities service, appointed Carter to the newly established position of Inspector-General of Monuments of Upper (southern) Egypt.[4] As Inspector, he supervised the clearance of several newly discovered tombs, including that of Hatshepsut, one of only four women pharaohs, who reigned from 1478 to 1458 BC, and that of King Tuthmosis IV, who reigned from 1401 to 1390 BC. [4]

In 1904, he was transferred to the Inspectorate of Lower Egypt. Carter was praised for his improvements in the protection of, and accessibility to, existing excavation sites, and his development of a grid-block system for searching for tombs. The Antiquities Service also provided funding for Carter to head his own excavation projects. Carter resigned from the Antiquities Service in 1905 after a formal inquiry into what became known as the Saqqara Affair, a noisy confrontation between Egyptian site guards and a group of French tourists. Because of his stubbornness and his sense of propriety, he ejected some French tourists who were drunk and had been fighting with the Egyptian guards at the burial vaults of the sacred bulls.[4] Carter sided with the Egyptian personnel.

For the next year and a half, Carter made a living as a watercolorist and as an antiquities dealer. In 1907, the fifth Earl of Carnarvon, an Englishman who was in Egypt for his health, employed him to supervise Carnarvon’s Egyptian excavations in the Valley of the Kings. Gaston Maspero introduced the two to ensure that Howard Carter imposed modern archaeological methods and systems of recording. Already in their very first year of collaboration, Carter excavated the tomb of a late 16th century BC mayor and a written tablet dealing with the expulsion from Egypt of the Hyksos, who were foreign invaders. Carter and Carnarvon made further impressive discoveries in subsequent years, which included two so-called “lost” temples, that of Hatshepsut and of Rameses IV (ca. 1154-1148 BC), as well as a number of significant nobles’ tombs dating from 2000-1500 BC.

The Valley of the Kings

Carnarvon financed Carter’s work in the Valley of the Kings to 1914, but excavations and study were interrupted until 1917 by the First World War. Carter enthusiastically resumed his work following the end of the First World War. After several years of finding little, Lord Carnarvon became dissatisfied with the lack of results, and informed Carter in 1922 that he had one more season of funding to search the Valley of the Kings and find the tomb. Time was running out for Carter and he had only about a month to locate the tomb of Tutankhamun. He had already spent almost ten years searching. During that time, his workers had moved over 200,000 tons of sand and gravel by hand.[4]

The Discovery of Tutankhamun

In November 1922, Carter and his workers uncovered 12 steps that led to a tomb entrance, still sealed after 30 centuries, and the rest is history [1,2]. The tomb is considered the best preserved and most intact pharaonic tomb ever found in the Valley of the Kings. The clearance of the tomb with its thousands of objects continued until 1932. Following his sensational discovery, Carter retired from archaeology and became a part-time agent for collectors and museums. He visited the United States in 1924 and gave a series of illustrated lectures in New York City and other cities in the US that were attended by very large and enthusiastic audiences, sparking American Egyptomania.

A three-volume work on the discovery of the tomb and its contents, called The Tomb of Tutankhamen, much of it ghost written by Carter’s friend Percy White, appeared between 1923 and 1933. Carter was preparing a definitive report on the tomb in six volumes, when he died in London on March 2, 1939, at age 66. In recognition of his achievements, Yale University conferred upon Carter the honorary degree of Doctor of Science, and the Real Academia de la Historia of Spain made him an honorary member.[5]

Nicholas Reeves, Recent Research in Egyptian Art: Behind the Mask of Tutankhamun, [8]