You are here: Home › art › Henri de Toulouse-Lautrec – A Giant in Art 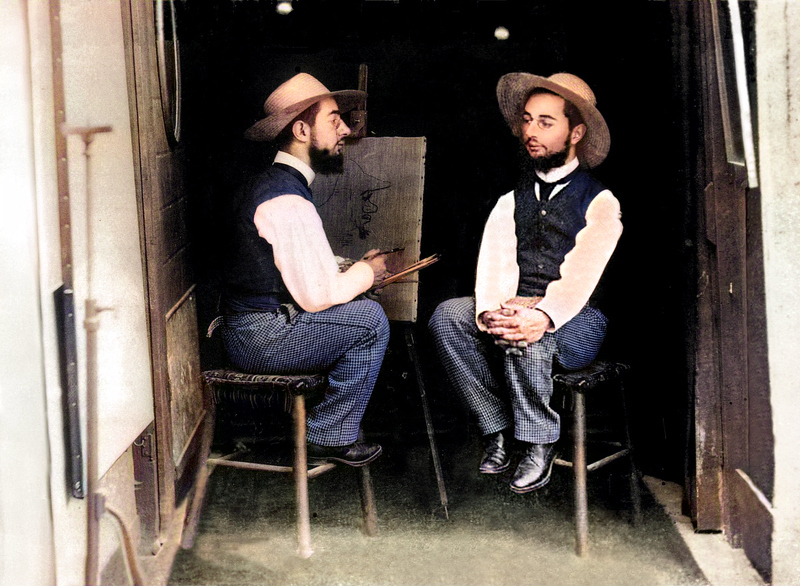 On November 24, 1864, French painter, printmaker, draughtsman and illustrator Henri de Toulouse-Lautrec was born. Toulouse-Lautrec – along with Cézanne, Van Gogh [4] and Gauguin [11] – is among the most well-known painters of the Post-Impressionist period. Although you might not be interested in art, for sure you will have heard about Henri Toulouse-Lautrec or you might have seen one of his paintings or famous posters. His artwork about the Fin de Siècle Paris and the demimonde of Montmartre and the Moulin Rouge hast become iconic and is part of today’s popular culture.

“I paint things as they are. I don’t comment. I record.”
– Henri Toulouse-Lautrec

Henri Marie Raymond de Toulouse-Lautrec-Monfa was born at the chateau du Bosc in Albi, France, as the firstborn child of Comte Alphonse de Toulouse-Lautrec-Monfa and his wife Adèle. At the age of eight, Henri went to live with his mother in Paris where he drew first sketches and caricatures in his exercise workbooks. The family quickly realized that Henri’s talent lay in drawing and painting. Henri suffered from congenital health conditions sometimes attributed to a family history of inbreeding, also his parents were first cousins. At the age of 13 Henri fractured his right thigh bone and one year later the left. The breaks did not heal properly. His legs ceased to grow, so that as an adult he was extremely short (only 1.37 m). He had developed an adult-sized torso, while retaining his child-sized legs. 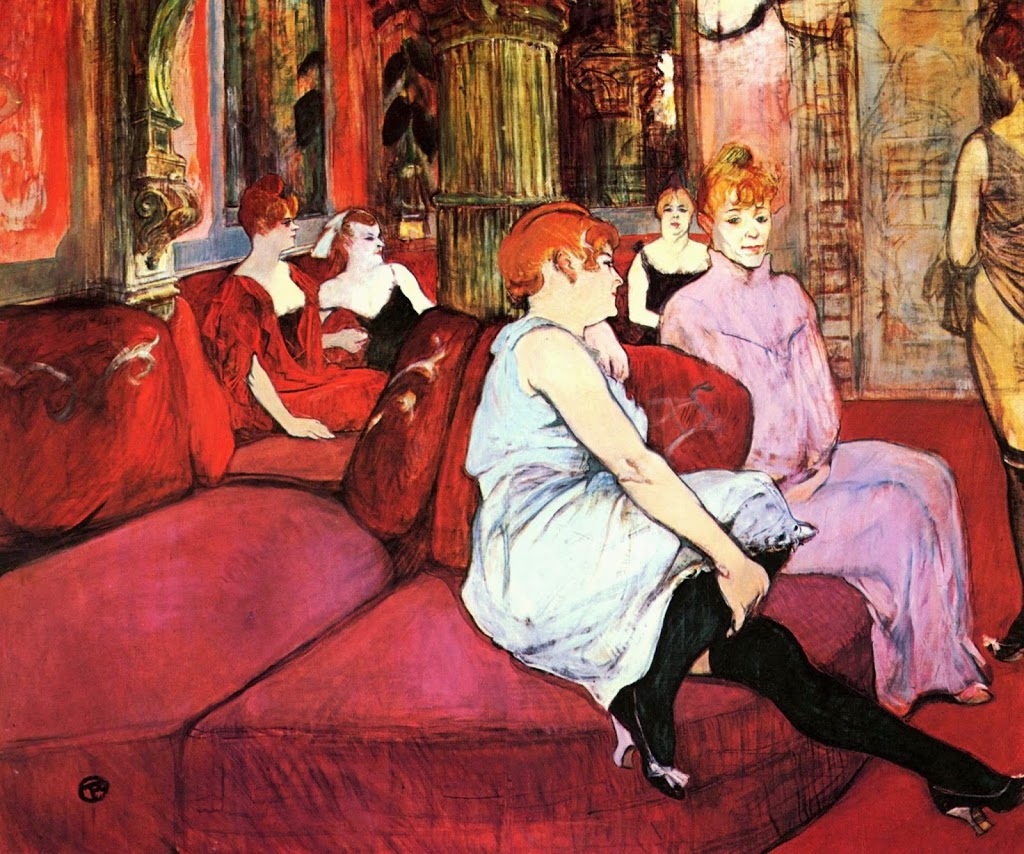 The Study of Painting

Physically unable to participate in many activities typically enjoyed by men of his age, Toulouse-Lautrec immersed himself in art. After failing college entrance exams, Henri passed at his second attempt and completed his studies. Toulouse-Lautrec was drawn to Montmartre, the area of Paris famous for its bohemian lifestyle. During his studies in the studios of the acclaimed portrait painter Léon Bonnat and Fernand Cormon, Toulouse-Lautrec met Émile Bernard and Van Gogh. With his studies finished, in 1887 he participated in an exposition in Toulouse using the pseudonym “Tréclau”, an anagram of the family name ‘Lautrec’.

“Love is a disease which fills you with a desire to be desired.”
— Henri Toulouse-Lautrec, quoted in [9]

Posters for the Parisian Demi Monde

From 1889 until 1894, Henri took part in the “Independent Artists’ Salon” on a regular basis. He made several landscapes of Montmartre. At this time the cabaret ‘Moulin Rouge‘ opened and Toulouse-Lautrec was commissioned to produce a series of posters. His mother had left Paris and, though Henri had a regular income from his family, making posters offered him a living of his own. Other artists looked down on the work, but Henri was so aristocratic he did not care. The ‘Moulin Rouge’ reserved a seat for him and displayed his paintings. Among the well-known works that he painted for the Moulin Rouge and other Parisian nightclubs are depictions of the singer Yvette Guilbert; the dancer Louise Weber, known as the outrageous La Goulue (“The Glutton“), who created the “French Can-Can“; and the much more subtle dancer Jane Avril. 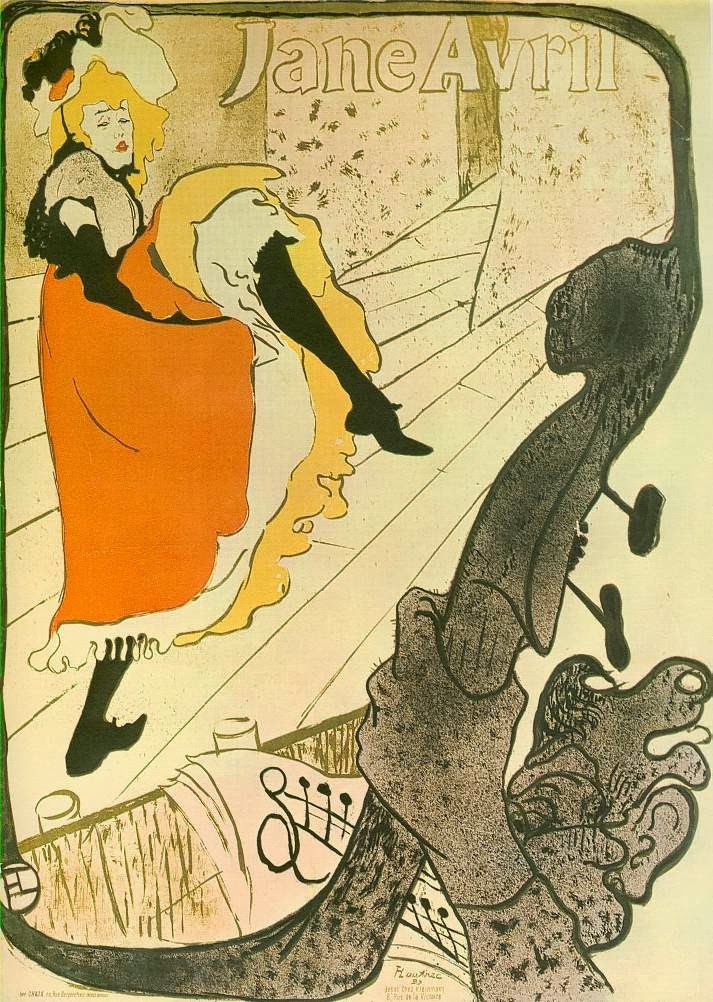 Henri de Toulouse-Lautrec travelled to London making posters and became a friend of famous poet Oscar Wilde.[6] Lautrec was mocked for his short stature and physical appearance, which led him to drown his sorrows in alcohol. In 1893 Lautrec’s alcoholism began to take its toll, and as those around him realized the seriousness of his condition there were rumors of a syphilis infection. Toulouse-Lautrec was placed in a sanatorium shortly before his death. He died from complications due to alcoholism and syphilis at the family estate in Malromé at the age of 36 in 1901.

Henri Toulouse-Lautrec created art that was inseparable from his legendary lifestyle. His style as an artist was influenced by the classical Japanese woodprints which became popular in contemporary art circles in Paris. He excelled at capturing people in their working environment, with the color and the movement of the night-life present but the glamour stripped away. Toulouse-Lautrec’s posters promoted Paris’ night-life and elevated lithography from the popular medium of advertising to the realm of high art. With his unvarnished scenes of Parisian nightlife around Montmartre, Lautrec reflected the image of a legendary time, the so-called Belle Époque. Toulouse-Lautrec was primarily a portraitist: the individual, not the crowd, was his subject. Toulouse-Lautrec’s life was filmed in 1952 by director John Huston.[7] The film is entitled Moulin Rouge, after Pierre La Mure‘s novel of the same name, based on Toulouse-Lautrec’s life story and published in 1950. In a 2005 auction at Christie’s auction house, La Blanchisseuse, his early painting of a young laundress, sold for US$22.4 million and set a new record for the artist for a price at auction.