You are here: Home › literature › Oscar Wilde – One of the Most Iconic Figures of Victorian Society 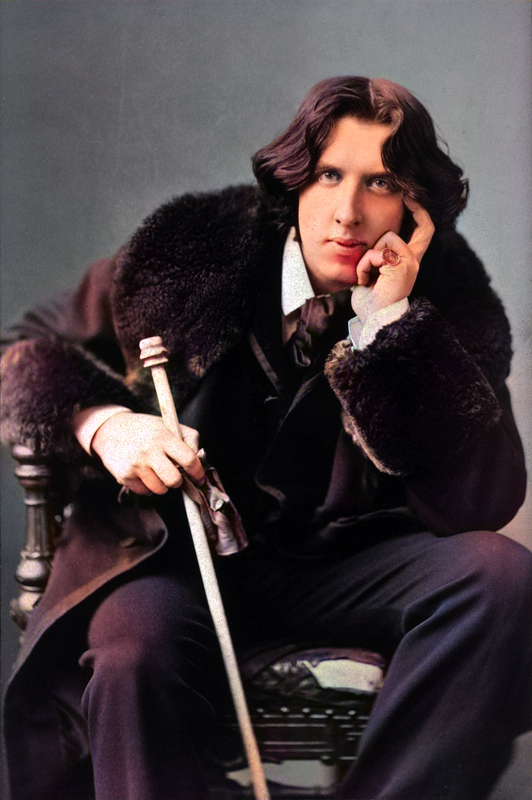 On October 16, 1854, the famous Irish poet and writer Oscar Fingal O’Flahertie Wills Wilde aka Oscar Wilde was born. He is considered to be one of the most iconic figures from late Victorian society. Enjoying a meteoric rise to the top of society, his wit, humour and intelligence shines through his plays and writings. However, because of his sexual orientation for a long time his name was synonymous with scandal and intrigue. Today, nevertheless he is remembered with great affection for his biting social criticism, wit and linguistic skills.

“I have the simplest tastes. I am always satisfied with the best.”
— Oscar Wilde [9]

Oscar Wilde was born in Dublin, Ireland, where his parents were well known and attracted a degree of gossip for their extravagant lifestyles. His father Wille Wilde even was knighted for his services to medicine, although overshadowed by a scandalous allegation of rape by one of his patients, while his mother was a writer and literary hostess. Oscar proved to be a student of great talent and was awarded a scholarship to Trinity College, Dublin, where he studied the classics, in particular developing an interest in the Greek philosophers and the Hellenistic view of life.

The Art of Self-Publicity

“Consistency is the last refuge of the unimaginative.”
— Oscar Wilde, The Relation of Dress to Art, in The Pall Mall Gazette (February 28, 1885)

From Trinity College he won a scholarship to Magdalen College, Oxford University, where he developed his poetic sensibilities and love of literature becoming involved in the aesthetic movement. During his studies he was equally inspired by Walter Horatio Pater‘s aesthetic ideals pointing in the direction of L’art pour l’art and John Ruskin‘s deeply moral, religious and socially committed view of art, although they represented the new aestheticism in very different, almost opposite ways.[5] Wilde completed his studies in 1878 with the academic degree of Bachelor of Arts (B.A.) with distinction.

But, after a while he lost interest in pursuing an academic career in Oxford and moved to London. It was in London that he was able to skillfully enter into high society, soon becoming well known as a playwright and noted wit. Oscar Wilde became one of the early “celebrities” – in some respects he was famous for being famous. His dress was a target for satire in the cartoons, but Wilde didn’t seem to mind. In fact he had learnt the art of self-publicity.

In June 1878, Oscar Wilde received his first literary recognition with his poem Ravenna, which was awarded the Newdigate Prize. In the poem, which depicts a city that sank from its former greatness into nowhere, the impressions of his second journey to Italy had taken on an artistic form. Wilde was admired in his time as a writer and was known in prudish Victorian Britain as both a scandal writer and dandy. He was famous for his eloquence and his extravagant appearance, which he accentuated with his unusual clothing (e.g. velvet breeches and silk stockings). Early on, as an aesthete of aesthetes accused of unmanly devotion to art, he was drawn to the mockery of the satirical magazine Punch.

“Death must be so beautiful. To lie in the soft brown earth, with the grasses waving above one’s head, and listen to silence. To have no yesterday, and no tomorrow. To forget time, to forgive life, to be at peace.”
— Oscar Wilde, The Canterville Ghost (1887).

Wilde was invited to lectures in North America. At the end of 1881 he left for New York. From the first day of his arrival in New York, reporters and journalists besieged him, expected bonmots from him, and talked extensively about his clothes in the media. His lectures were well attended and he was showered with invitations. The poet Walt Whitman [7] had a remarkable meeting in Philadelphia. On the other hand, Wilde was ruthlessly criticized and caricatured in the press on both sides of the Atlantic. Thomas Wentworth Higginson published one of the most vicious attacks in Woman’s Journal (February 4, 1882) under the title Unmanly Manhood. 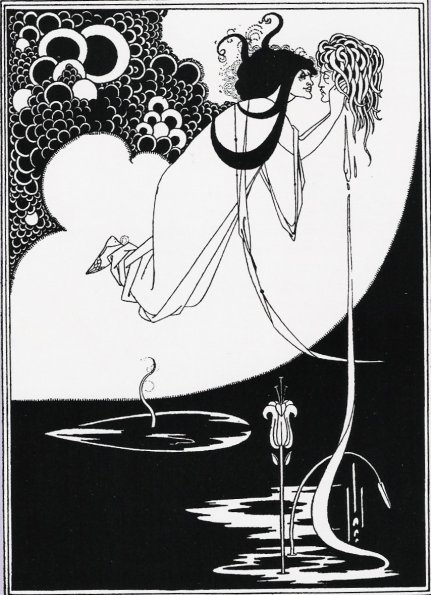 Aubrey Beardsley: The Apotheosis, Illustration for Salome by Oscar Wilde, published in “The Studio”, Vol. 1, No. 1, 1893.

A poet famous and celebrated not only in the United Kingdom but also in Europe and America, he married Constance Lloyd, a twenty-six year old children’s book author from a wealthy family, at the age of thirty on 29 May 1884. Wilde worked from 1887 to 1889 for the Pall Mall Gazette and then as editor of the journal Woman’s World.

His literary output was diverse. A first volume of his poetry was published in 1881 but as well as composing verse, he contributed to publications such as the ‘Pall Mall Gazette‘, wrote fairy stories and published a nowadays famous novel ‘The Picture of Dorian Gray‘ (1891). But in the plot of the novel and in the art notes incorporated, one can read both a proclamation and a critique of aestheticism, a literary current of the fin de siècle. In this work, his only novel, critics found, on the one hand, autobiographical elements and, on the other, a direct response to French symbolism, particularly to A rebours by Joris-Karl Huysmans.[6]

“In this world there are only two tragedies. One is not getting what one wants, and the other is getting it.”
— Oscar Wilde, Lady Wintermere’s Fan (1892), Mr. Dumby, Act III.

His greatest talent was for writing plays, and he produced a string of extremely popular comedies including ‘Lady Windermere’s Fan‘ (1892), ‘An Ideal Husband (1895)’ or ‘The Importance of Being Earnest‘ (1895), which satirically depicts the upper class and is considered one of his best works. His piece Salome from the year 1891 after the biblical Salome legend (with famous, partly very revealing art nouveau illustrations by Aubrey Beardsley) was rejected by the censor and therefore found no publisher in England. In 1894 it was premiered in Paris by and with Sarah Bernhardt. Richard Strauss set the German translation by Hedwig Lachmann to music for his opera Salome, which premiered at the Dresden Court Opera on December 9, 1905.

Private Life in Drama and Tragedy

But also in his private life drama and tragedy did take turns. The family father Wilde was – for his time – relatively open about his homosexuality. His homosexual, more exactly ephebophilic partnerships, e.g. with his young friend and later editor Robert Ross, were not unknown. In 1891 Wilde began an affair with Lord Alfred Douglas, nicknamed ‘Bosie’. In April 1895, Wilde sued Bosie’s father, the Marquis of Queensberry, for libel, after the Marquis had accused him of being homosexual. Wilde lost and, after details of his private life were revealed during the trial, was arrested and tried for gross indecency. He was sentenced to two years of hard labour. The decisive factor was not his relationship with Lord Douglas, but his dealings with male prostitutes, some of whom had been heard as witnesses.

In Reading Prison, Wilde wrote a letter of 50,000 words to Alfred Douglas, which he sent to Robert Ross after his release from prison so that he would not be destroyed. Lord Douglas later always denied that he had ever received this letter. Under the title De Profundis the letter was published posthumously (1905) with omission of possibly offensive passages. He was badly beleaguered, and Wilde was released from prison on 19 May 1897. After his original plan to retire to a Jesuit college as a penitent for six months had been thwarted by the immediate refusal of the leader, he fled to Paris on the evening of the same day before the social ostracism.

He spent the rest of his life in Europe, publishing ‘The Ballad of Reading Gaol’ in 1898. Oscar Wilde died in Paris on 30 November 1900. He was buried first at the Cimetière parisien de Bagneux, but in 1909 he was transferred to the Cimetière du Père Lachaise in Paris.

“I have said to you to speak the truth is a painful thing. To be forced to tell lies is much worse.”
— Oscar Wilde, De Profundis (1897)