You are here: Home › art › Michelangelo Buonarotti – the Renaissance Artist

On March 6, 1475, Italian sculptor, painter, architect, and poet of the High Renaissance Michelangelo di Lodovico Buonarroti Simoni was born. Michelangelo exerted an unparalleled influence on the development of Western art. He is considered to be the greatest living artist during his lifetime, he has since been described as one of the greatest artists of all time. Despite making few forays beyond the arts, his versatility in the disciplines he took up was of such a high order that he is often considered a contender for the title of the archetypal Renaissance man, along with his rival and fellow Florentine Medici client, Leonardo da Vinci.[6] We had already featured Michelangelo‘s masterpieces, such as e.g. the Ceiling of the Sistine Chapel [3] or his famous sculpture David [2]. This time, we want to focus on his life.

Michelangelo Buonarroti was born to a family that had for several generations belonged to minor nobility in Florence, Italy, but had, by the time he was born, lost its patrimony and status. His father Ludovico di Leonardo Buonarroti Simoni had only occasional government jobs and was administrator of the small dependent town of Caprese, near Arezzo, Tuscany. Several months after Michelangelo’s birth, the family returned to Florence, where he was raised. Michelangelo became an apprentice relatively late, at 13, perhaps after overcoming his father’s objections, since becoming an artist was considered a step down on the social ladder. Nevertheless, he was apprenticed to the city’s most prominent painter, Domenico Ghirlandaio, for a three-year term, but he already left after one year, having nothing more to learn.

Under the Wings of the Medici and Leonardo

When in 1489, Lorenzo de’ Medici, de facto ruler of Florence, asked Ghirlandaio for his two best pupils, Ghirlandaio sent Michelangelo and Francesco Granaccito attend the humanistic academy founded by the Medicis. Obviously talented, Michelangelo was taken under the wing of Lorenzo de’ Medici, known as the Magnificent, who surrounded himself with poets and intellectuals, and Michelangelo was included. More important, he had access to the Medici art collection, which was dominated by fragments of ancient Roman statuary. Unfortunately, Lorenzo de’ Medici died in 1492, and Michelangelo returned home to his father’s house. Florence was at this time regarded as the leading centre of art, producing the best painters and sculptors in Europe, and the competition among artists was stimulating. The city was, however, less able than earlier to offer large commissions, and leading Florentine-born artists, such as Leonardo da Vinci and Leonardo’s teacher, Andrea del Verrocchio, had moved away for better opportunities in other cities.[1]

To Venice and Bologna

In 1494, the Medici were expelled from Florence as the result of the rise of Savonarola.[7] Michelangelo left the city before the end of the political upheaval, moving to Venice and then to Bologna. Michelangelo later returned to Florence but received no commissions from the new city government under Savonarola. He returned to the employment of the Medici and worked on two small statues. Cardinal Raffaele Riario, to whom Lorenzo had sold one of the statues was so impressed by the quality of the sculpture that he invited the artist to Rome.

Back in Rome – The Pieta

Michelangelo arrived in Rome in 1496 at the age of 21 and began work on a commission for Cardinal Raffaele Riario, an over-life-size statue of the Roman wine god Bacchus, which led to a new commission by the French ambassador to the Holy See, Cardinal Jean de Bilhères-Lagraulas, to carve a Pietà, a sculpture showing the Virgin Mary grieving over the body of Jesus. Michelangelo was 24 at the time of its completion and it was soon to be regarded as one of the world’s great masterpieces of sculpture. The complex problem for the designer was to extract two figures from one marble block, an unusual undertaking in all periods. Michelangelo treated the group as one dense and compact mass as before so that it has an imposing impact.[1] It is now located in St Peter’s Basilica.

Michelangelo returned to Florence in 1499 and was asked by the consuls of the Guild of Wool to complete an unfinished project begun 40 years earlier by Agostino di Duccio: a colossal statue of Carrara marble portraying David as a symbol of Florentine freedom to be placed on the gable of Florence Cathedral.[2] Michelangelo responded by completing his most famous work, the statue of David, in 1504. The modeling is especially close to the formulas of classical antiquity, with a simplified geometry suitable to the huge scale yet with a mild assertion of organic life in its asymmetry.[1] 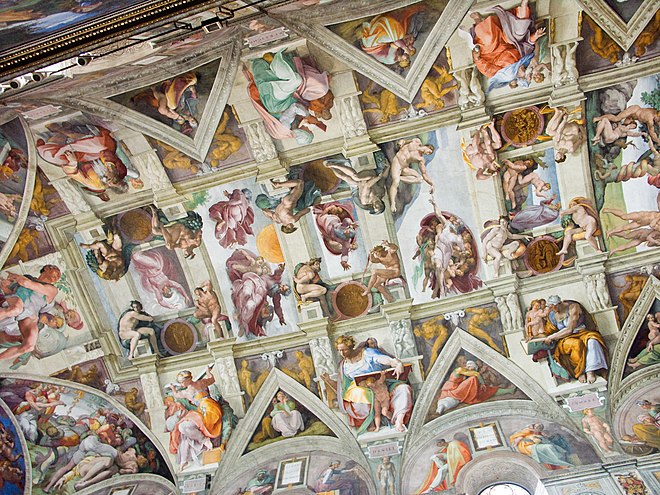 In 1505 Michelangelo was invited back to Rome by the newly elected Pope Julius II and commissioned to build the Pope’s tomb, which was to include forty statues and be finished in five years. Under the patronage of the pope, Michelangelo experienced constant interruptions to his work on the tomb in order to accomplish numerous other tasks. Although Michelangelo worked on the tomb for 40 years, it was never finished to his satisfaction. During the same period, Michelangelo painted the ceiling of the Sistine Chapel, which took approximately four years to complete (1508–1512). The Sistine Chapel had great symbolic meaning for the papacy as the chief consecrated space in the Vatican, used for great ceremonies such as electing and inaugurating new popes. Michelangelo was originally commissioned to paint the Twelve Apostles on the triangular pendentives that supported the ceiling, and to cover the central part of the ceiling with ornament. Michelangelo persuaded Pope Julius to give him a free hand and proposed a different and more complex scheme, representing the Creation, the Fall of Man, the Promise of Salvation through the prophets, and the genealogy of Christ.[3] The composition stretches over 500 square metres of ceiling and contains over 300 figures. Among the most famous paintings on the ceiling are The Creation of Adam, Adam and Eve in the Garden of Eden, the Deluge, the Prophet Jeremiah, and the Cumaean Sibyl.

In 1520 the Medici came back to Michelangelo with another grand proposal, this time for a family funerary chapel in the Basilica of San Lorenzo. Fortunately for posterity, this project, occupying the artist for much of the 1520s and 1530s, was more fully realized. In 1524 Michelangelo received an architectural commission from the Medici pope for the Laurentian Library at San Lorenzo’s Church. He designed both the interior of the library itself and its vestibule, a building utilizing architectural forms with such dynamic effect that it is seen as the forerunner of Baroque architecture. The sack of Rome in 1527 saw Pope Clement VII ignominiously in flight, and Florence revolted against the Medici, restoring the traditional republic. It was soon besieged and defeated, and Medici rule permanently reinstalled, in 1530. During the siege Michelangelo was the designer of fortifications. He showed understanding of modern defensive structures built quickly of simple materials in complex profiles that offered minimum vulnerability to attackers and maximum resistance to cannon and other artillery.[1] 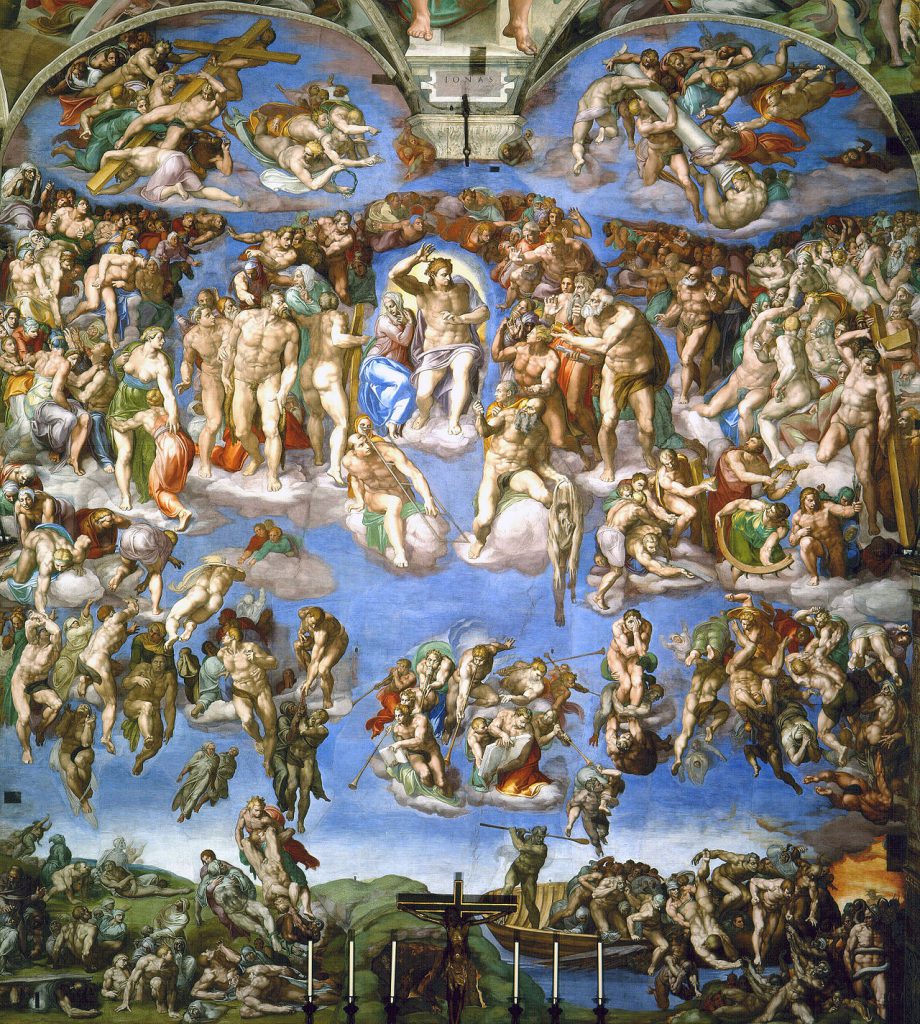 The Last Judgement and St Peter

Shortly before his death in 1534 Pope Clement VII commissioned Michelangelo to paint a fresco of The Last Judgement on the altar wall of the Sistine Chapel. His successor, Paul III, was instrumental in seeing that Michelangelo began and completed the project, which he labored on from 1534 to October 1541. The fresco depicts the Second Coming of Christ and his Judgement of the souls. Michelangelo ignored the usual artistic conventions in portraying Jesus, showing him as a massive, muscular figure, youthful, beardless and naked. Michelangelo devoted himself almost entirely to architecture and poetry after 1545, including rebuilding of the Capitol area, the Piazza del Campidoglio, for Pope Paul III. 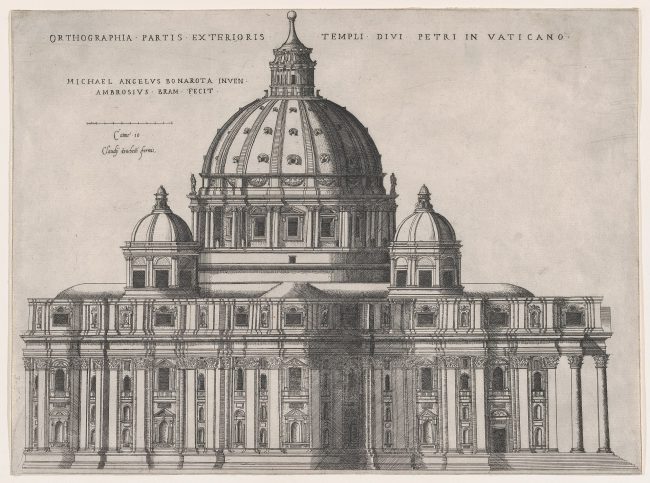 The pope also appointed Michelangelo to direct the work at St. Peter’s in 1546. The process of replacing the Constantinian basilica of the 4th century had been underway for fifty years and in 1506 foundations had been laid to the plans of Bramante. Successive architects had worked on it, but little progress had been made. Michelangelo was persuaded to take over the project. The enormous church was planned to be an equal-armed cross, with a huge central space beneath the dome. Secondary spaces and structures would produce a very active rhythm. By the time Michelangelo died, a considerable part of St. Peter’s had been built in the form in which we know it.[5]

“Enough, enough, enough! Say no more! Lump the whole thing! say the Creator made Italy from designs by Michael Angelo!”
— Mark Twain, Innocents Abroad. Twain humorously depicts tourists being told that most every monument in Italy was designed or painted by “Michael Angelo”, oblivious to the historic significance of “Michelangelo”.

Michelangelo, with Leonardo da Vinci and Raphael, is one of the three giants of the Florentine High Renaissance. Although their names are often cited together, Michelangelo was younger than Leonardo by 23 years, and older than Raphael by eight. Because of his reclusive nature, he had little to do with either artist and outlived both of them by more than forty years.

Felizia Zavarella Stadelman, Art History Series | Through the Eyes of the Artist: Michelangelo, [9]