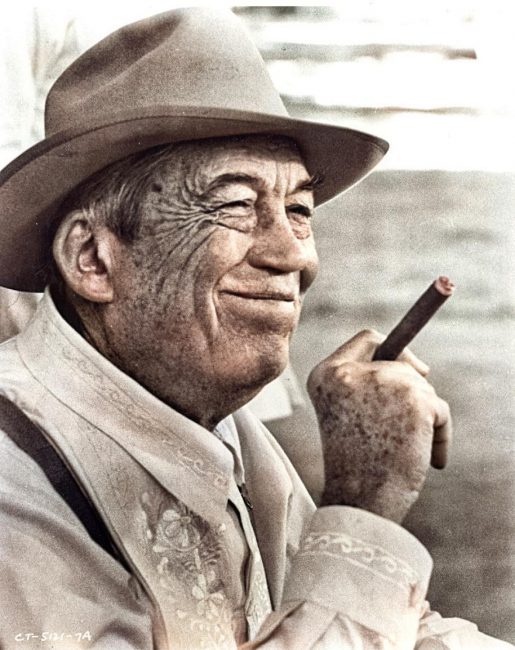 On August 5, 1906, American film director, screenwriter, and actor John Huston was born. Huston has been referred to as “a titan”, “a rebel”, and a “renaissance man” in the Hollywood film industry. He wrote the screenplays for most of the 37 feature films he directed, many of which are today considered classics. During his 46-year career, Huston received 15 Oscar nominations, winning twice, and directed both his father, Walter Huston, and daughter, Anjelica Huston, to Oscar wins.

“The directing of a picture involves coming out of your individual loneliness and taking a controlling part in putting together a small world.”
– John Huston

John Huston was born on August 5, 1906, in Nevada, Missouri. He was the only child of Rhea (née Gore) and Canadian-born Walter Huston. His father was an actor, initially in vaudeville, and later in films. His mother initially worked as a sports editor for various publications, but gave it up after John was born. Walter Huston took his only child onto the Vaudeville stage at the age of three. After his parents’ divorce, the boy had to go on tour with his father every six months and accompany his mother on reportage trips, mostly to horse races. John Huston was a tender and vulnerable child. Because of a heart enlargement and kidney disease, there was not much hope that the boy would reach adulthood. But he recovered when his mother moved with him from Texas to California. He dropped out of school at 14, went to military school for a short time at 15, then became a boxer and won the California Amateur Lightweight Championships – his characteristic depressed nose was a product of that time.

At the age of 18, Huston married Dorothy Harvey. In the same year he appeared at the instigation of his father then for the first time as an actor in an off Broadway play called The Triumph of the Egg. He made his Broadway debut in 1925. But Huston felt restricted by his marriage as well as by the acting and gave up both. He went with the US army to Mexico and became an honorary officer of the Mexican cavalry. After some time he returned to the USA. His mother let her relationships play and Huston could work as a reporter in New York. But his stories were badly researched and he was fired. Again and again he sent short stories to various newspapers and magazines. He was hired by Samuel Goldwyn as a scriptwriter, wrote dialogues for movies by William Wyler and his first own script, Law and Order, which was successfully filmed. In 1933 he killed a dancer on Sunset Boulevard. His father asked MGM’s powerful boss Louis B. Mayer to use his influence with the police, and in fact the alcohol content of John Huston’s blood was not checked. Huston was absolved of all responsibility. Traumatized, he fled Hollywood and travelled to London and Paris, where he studied painting and drawing; he became homeless there and had to beg for food.#

Huston tried to put his life in order. He married a second time, wrote and produced some Broadway plays, played Abraham Lincoln in a theater production and sent some scripts to Warner Brothers. Impressed by his talent, Huston was commissioned to work on prestigious projects such as Jezebel, Wuthering Heights, Juarez, Dr. Ehrlich’s Magic Bullet, High Sierra and Sergeant York. Huston received his first two Oscar nominations. In 1941 he got the chance to make his own movie. As a scriptwriter and director he adapted Dashiell Hammett‘s thriller The Maltese Falcon for the screen for the third time. With The Maltese Falcon Huston established a new genre in American cinema, the film noir. It was an overwhelming success; it turned Humphrey Bogart into a star and today is regarded as a model for the film noir as well as one of the greatest detective films.[1]

Huston’s following movies were the melodrama In This Our Life with Bette Davis and Olivia de Havilland and the romantic war movie Across the Pacific with three of the stars from his first movie, Bogart, Mary Astor and Sydney Greenstreet. During World War II, Huston served as a lieutenant and made a series of documentaries for the U.S. government. These included the controversial film Let There Be Light (1946), which was kept under lock and key by the US government for its disturbingly realistic portrayal of the problems of war veterans.

He celebrated a great success in 1948 with The Treasure of the Sierra Madre. This character study about the greed for wealth brought Huston two Oscars (director and screenplay) and his father Walter Huston the Oscar for the best supporting role. At the beginning of the film John Huston has a cameo appearance as a tourist, but he shouldn’t be seen as an actor again for another 15 years. The restless Huston now remained loyal to the film business and wrote and staged fundamental works of American film history: Key Largo, The Asphalt Jungle, The Red Badge of Courage, African Queen, Moulin Rouge and Moby Dick.

Together with William Wyler, Humphrey Bogart, Gene Kelly, Danny Kaye and others, the controversial Democratic Party supporter founded the Committee for the First Amendment in 1947, which took up the fight against Senator Joseph McCarthy‘s anti-Communist Un-American Activities Committee. In protest against Hollywood’s blacklists and bans on employment, Huston moved to St. Clerans, Ireland, and became an Irish citizen with his fourth wife, ballet dancer Enrica Soma. Two children are descended from the marriage, among them the actress Anjelica Huston (* 1951).

Huston’s films of the 1960s and 1970s were no longer so unanimously welcomed by critics, yet they were mostly box-office hits and consolidated his reputation as an innovative, often controversial filmmaker. The Misfits, Freud, The Night of the Iguana, Fat City, and The Man Who Would Be King are some of the most notable films. In 1963 Huston returned to acting with a supporting role in Otto Preminger‘s epic movie The Cardinal and was rewarded with a Golden Globe and an Oscar nomination. From now on he played prominent supporting roles again and again; his best roles were in The Bible: In the Beginning… as Noah and Voice of God the Father as well as of the Serpent in Paradise,  and in The Battle for the Planet of the Apes. 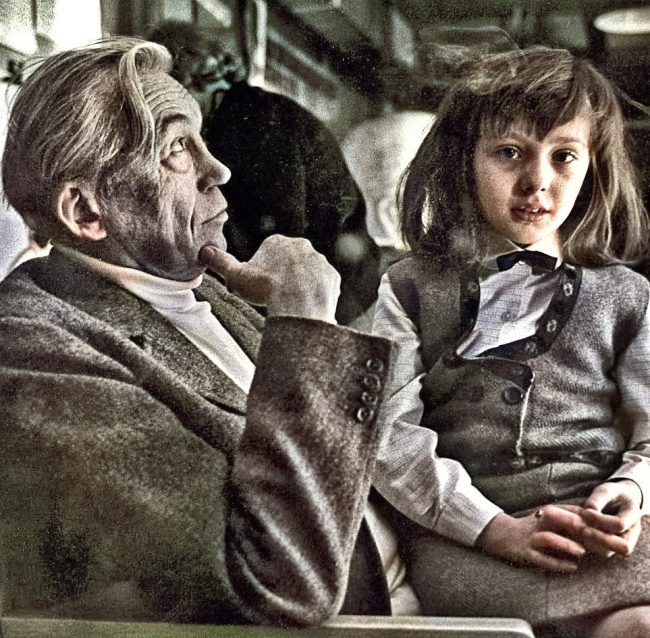 After a series of unsuccessful and artistically disappointing films, Huston ended his life’s work with three films that were unanimously ranked among his best by critics: Under the Volcano, based on the novel Under the Volcano by Malcolm Lowry and with Albert Finney as Consul and Jacqueline Bisset as Yvonne, Prizzi’s Honor, the film satirizes the everyday life of the mafia family Prizzi, and The Dead after a story by James Joyce,[2] the screenplay by Tony Huston and Anjelica Huston in the leading role of Gretta. Huston continued to work on film projects despite pulmonary emphysema (the consequence of chain smoking) until shortly before his death. In his last years Huston shot successfully with his daughter Anjelica and his sons Tony and Danny. Anjelica Huston received an Oscar for her performance in DiePrizzi’s Honor. In the movies Mister Corbett’s Ghost and Mr. North, based on the novel Theophilus North (1973) by Thornton Wilder, the roles were reversed; the director was Danny Huston, the father was an actor.

“I miss the order that old Hollywood had. It was much easier then to get a picture made than it is today. It’s become a cliché that the studio people were picture makers then, but there is a large element of truth in it. They were people who wanted to make pictures, and they knew how to make them. They weren’t accountants and bookkeepers, tax consultants and efficiency experts who don’t know how to make pictures, or wheeler-dealers; that element just seems to have taken over today—promoters who just want to get a part of the action rather than people who want to make good movies.”
– John Huston, Playboy interview, 1985

At the centre of Huston’s films are almost always men in conflict situations; often these heroes are defeated or win dubious victories. “His protagonists often represent extremes. They are either ignorant, ridiculous and doomed to doom because of their lack of knowledge about themselves, or intelligent, arrogant, but also doomed to doom because of their lack of knowledge about themselves. Between these extremes stands the cool, intelligent protagonist who will sacrifice everything for self-knowledge and independence. […] Huston has the greatest respect for the man who preserves his dignity despite pain and failure.”[3] Even in Huston’s first film as director, The Maltese Falcon, private detective Sam Spade solves the case, but he loses the woman he loves because he feels morally obliged to hand her over to the police as his partner’s murderer. Huston became famous for his straightforward way of filmmaking. From his first directorial work, he worked with a meticulously drawn storyboard, which he used to precisely define image composition and camera movements. He shot in the actual order of the story and preferred real locations to create authenticity. The actors were chosen according to whether they were experienced professionals, who needed to be given as little clues as possible in order to shoot as little as possible. Huston was known for staying below budget.  Huston received 15 Oscar nominations in the course of his career, and is the oldest person ever to be nominated for the Best Director Oscar when, at 79 years old, he was nominated for Prizzi’s Honor (1985). He won two Oscars, for directing and writing the screenplay for The Treasure of the Sierra Madre. Huston also won a Golden Globe for that film. He received the Life Achievement Award from the American Film Institute in 1983, and the Career Achievement Award from the U.S. National Board of Review of Motion Pictures in 1984