You are here: Home › geography › Matthew Fontaine Maury and the Oceanography 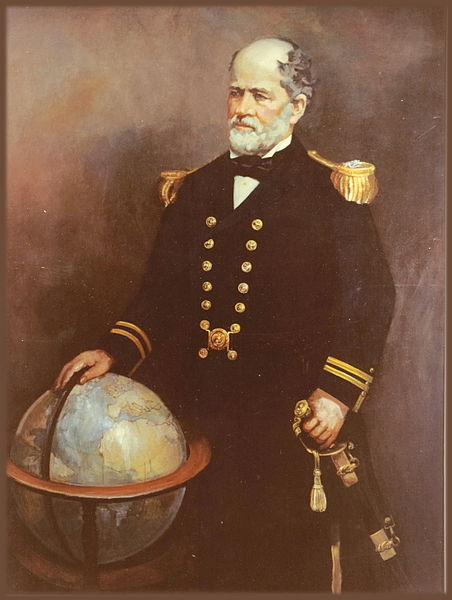 On January 14, 1806, American astronomer, historian, oceanographer, meteorologist, cartographer, author, geologist, and educator Matthew Fontaine Maury was born. He is often referred to as Father of Modern Oceanography and Naval Meteorology, due to the publication of his extensive works in his books, especially The Physical Geography of the Sea (1855), the first extensive and comprehensive book on oceanography to be published. Maury made many important new contributions to charting winds and ocean currents, including ocean lanes for passing ships at sea.

“We never tire of the sea; it is a laboratory in which delightful processes are continually being wrought out for our admiration and use. Its flora and its fauna, its waves and its tides, its salts and its currents, all afford grand and profitable themes of study and thought.”
– Matthew Fontaine Maury, as quoted in [11]

Matthew Fontaine Maury and the Navy

Matthew Fountaine Maury was born in Spotsylvania County, Virginia, USA, and intended to emulate the naval career of his older brother, Flag Lieutenant John Minor Maury, who however caught yellow fever after fighting pirates as an officer in the United States Navy. After John died painfully, their father forbade Matthew from joining the Navy. However, he obtained a Naval appointment through the influence of Senator Sam Houston, a family friend, in 1825, at the age of 19. Maury became midshipman on board the frigate Brandywine which was carrying the Marquis de La Fayette home to France following the Marquis’ famous visit to the United States.

The Paths of the Seas

A fall from a travel executive where he broke his hip and suffered a never-healing knee injury ended his active service. However he was able to stay with the Navy and began to collect and study logs from overseas ships and began to devote his time to the study of naval meteorology, navigation, charting the winds and currents, seeking the “Paths of the Seas” as mentioned in Psalms 8:8 “The fowl of the air, and the fish of the sea, and whatsoever passeth through the paths of the seas.” Matthew Maury was then appointed librarian of the many unorganized log books and records in 1842 and he showed early initiative to improve seamanship through organizing the information in his office and instituting a reporting system among the nation’s shipmasters to gather further information on sea conditions and observations.

In 1845 Maury published the first Wind and Current Chart of the North Atlantic, Sailing Directions and Physical Geography of the Seas and Its Meteorology. With the help of these maps, most journeys could be drastically shortened. Also the whale-migration he could read out from some data and entered them into special maps, since at his time the whale-migration was largely unknown, and whalers often spent months and years useless on the seas, since they knew nothing about the migration-behavior and the respective whereabouts of the whales. At his suggestion, meteorological observations on ships were started in 1847. In 1853 Maury initiated the convening of the 1st International Hydrographic Conference. He published the first depth map of the North Atlantic in 1854 and The Physical Geography of the Sea in 1855, which is considered the first description of physical oceanography. The book was translated into three languages and was a great success. For the first time, it payed tribute to the Gulf Stream‘s role in climate formation in the northern hemisphere. 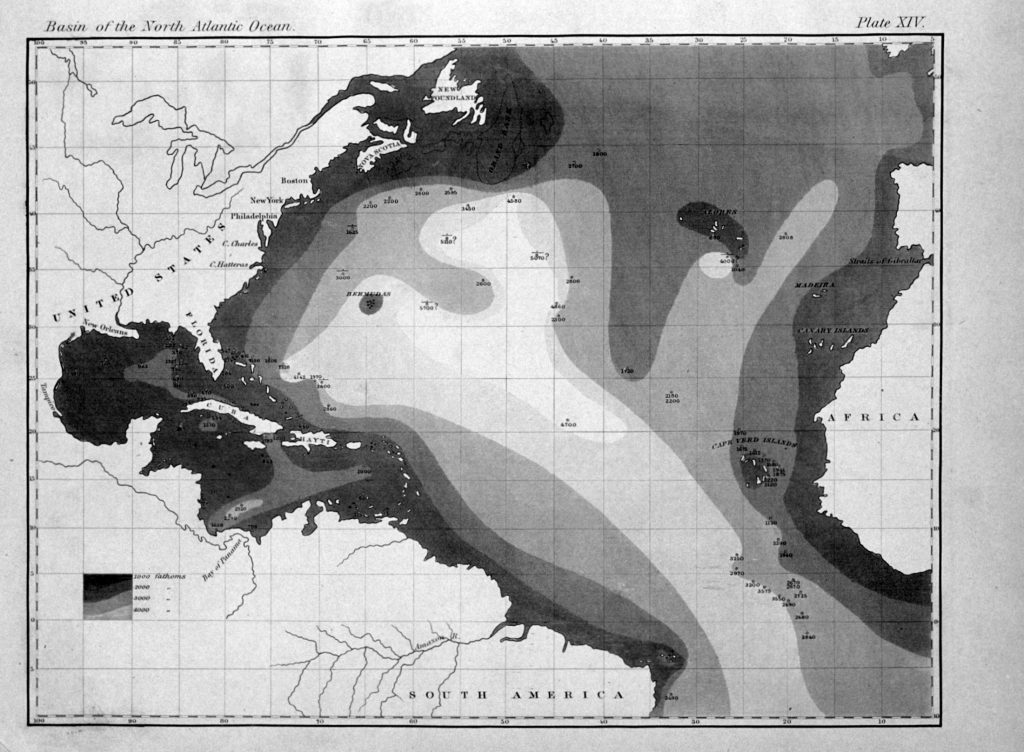 First printed map of oceanic bathymetry, published by Maury in Explanations with data from USS Dolphin (1836)

Maury highly supported the founding of a national observatory, and appealed to science enthusiast John Quincy Adams for the creation of what would eventually become the Naval Observatory. Occasionally, Adams visited Maury and took a look through the facility’s telescope. In 1842, Maury became director of the Archive of Nautical Charts and in 1844 of the Nautical Observatory in Washington, D.C. Matthew Maury held the position until resigning in 1861. With the outbreak of the American Civil War, Maury, a Virginian, resigned his commission as a US Navy commander and joined the Confederacy. He spent the war in the South as well as abroad, in Great Britain, Ireland, and France. He helped acquire a ship, CSS Georgia, for the Confederacy while he also advocated stopping the war in America among several European nations. After the Civil War, he was appointed professor at the Virginia Military Institute in Lexington in 1868. He died at the institute in 1873, after he had completed an exhausting state-to-state lecture tour on national and international weather forecasting on land

As a sailor, Maury noted that there wvere numerous lessons that had been learned by ship-masters about the effects of adverse winds and drift currents on the path of a ship. He further collected thousands of old ships’ logs and charts in storage in trunks dating back to the start of the United States Navy. Maury pored over these documents to collect information on winds, calms, and currents for all seas in all seasons to fulfill his dream to put this information in the hands of all captains. His work on ocean currents led him to support the theory of the Northwest Passage, as well as the hypothesis that an area in the ocean near the North Pole is occasionally free of ice. The scientist began to theorize that a northern passage between the oceans that was free of ice must exist to enable the traveling whales to surface and breathe. This became a popular idea that inspired many explorers to seek a reliably navigable sea route. Many of those explorers died in their search.

Due to Lieutenant Maury, who published his Wind and Current Chart of the North Atlantic, many sailors learned how to make use of the ocean’s currents and winds and drastically reduce the length of their ocean voyages. Maury’s uniform system of recording synoptic oceanographic data was adopted by navies and merchant marines around the world and was used to develop charts for all the major trade routes.

Learn more about Matthew Fontaine Maury in a mini-biography, a short film released in 1939, directed by Felix Feist, and narrated by Carey Wilson.