You are here: Home › space › Lunokhod 2 and the Soviet Moon Programme 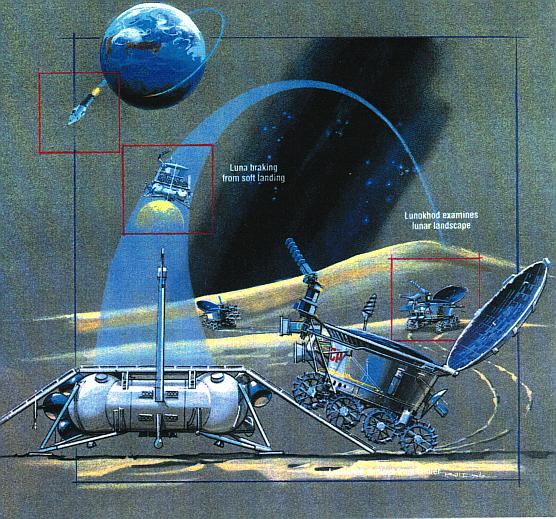 On January 16, 1973, Soviet unmanned lunar rover Lunokhod 2 took its first TV images of the surrounding area, then rolled down a ramp to the surface of the Moon, and took first pictures of the landing site. Lunokhod 2 was the second of two unmanned lunar rovers landed on the Moon by the Soviet Union as part of the Lunokhod programme. The Lunokhods were primarily designed to support the Soviet manned moon missions during Moon race. Instead, they were used as remote-controlled robots for exploration of the lunar surface and return its pictures after the successful Apollo manned lunar landings and cancellation of Soviet manned moon program.

The Soviet Union also entered the race to the moon and was able to achieve first success with the Lunik missions as early as 1959 and to continue with the Luna programme from 1963 onwards. Lunik 1 (Russian Луна-1, Luna-1, Metschta), was the first moon probe in the world and the first space probe ever. However, the planned goal of the mission, the impact on the moon, was not achieved. Instead, it unintentionally became the first flyby probe on January 4, 1959. Three of the nine probes of the Lunik programme reached the moon, the others failed. Lunik 2 was the first artificial missile to hit the lunar surface on 13 September 1959. Lunik 3 photographed the back of the moon for the first time in October 1959. The aim of the subsequent missions Luna 4 to 9 was to place a probe softly on the lunar surface. Until this succeeded with Luna 9, numerous setbacks had to be accepted. On February 3, 1966, with the successful landing of Luna 9 (takeoff: January 31, 1966) in the Oceanus Procellarum, the first soft landing on the moon in the history of space travel finally succeeded. The probes Luna 10, 11, 12 and 14 were moon orbiter, Luna 15, 16, 18, 20, 23 und 24 should safely land on the Moon’s surface and return to Earth carrying lunar rock samples. The subsequent series of Moon probes were supposed to carry a lunar rover for further examination of the Moons’s surface.

Lunokhod’s original primary mission was the back-up for L3 manned moon expeditions and for later Zvezda lunar base. It was intended to send an LK-R lander in unmanned L3 lunar expedition complex and two Lunokhod automated rovers to the Moon for preliminar study of surface. Further, LK-R was supposed to be used as a reserve escape craft in case of disability to start from Moon of LK and Lunokhods used by cosmonaut for transfer to LK-R in necessity and for regular research.

Lunokhod 1 was the first of two unmanned lunar rovers successfully landed on the Moon by the Soviet Union as part of its Lunokhod program. It was launched on November 10, 1970 and carried by Luna 17. After two course correction manoeuvres it entered lunar orbit five days later and soft-landed on the Moon in the Sea of Rains on November 17. Lunokhod 1 moved onto the Moon’s surface and ran during the lunar day, stopping occasionally to recharge its batteries via the solar panels. At night the rover hibernated until the next sunrise, heated by the radioisotope heater unit.

Lunokhod 2 was the second and more advanced of two unmanned lunar rovers landed on the Moon by the Soviet Union as part of the Lunokhod program. On January 12, 1973, Luna 21 was braked into a lunar orbit and landed on the Moon three days later. The primary objectives of the mission were to collect images of the lunar surface, examine ambient light levels to determine the feasibility of astronomical observations from the Moon, perform laser ranging experiments from Earth, observe solar X-rays, measure local magnetic fields, and study mechanical properties of the lunar surface material. After landing, the Lunokhod 2 took TV images of the surrounding area, then rolled down a ramp to the surface and took pictures of the Luna 21 lander and landing site.

The rover was equipped with three slow-scan television cameras, one mounted high on the rover for navigation, which could return high resolution images at different rates. The images were used by a five-man team of controllers on Earth who sent driving commands to the rover in real time. The main power source was a solar panel and a polonium-210 radioactive heat source was used to keep the rover warm during the long lunar nights. Further, Lunokhod 2 was equipped with several scientific instruments including a Soil Mechanics tester, Solar X-ray experiment, an Astrophotometer to measure visible and Ultraviolet light levels, a Magnetometer, a Radiometer, a Photodetector for laser detection experiments, and a French-supplied laser Corner Reflector. 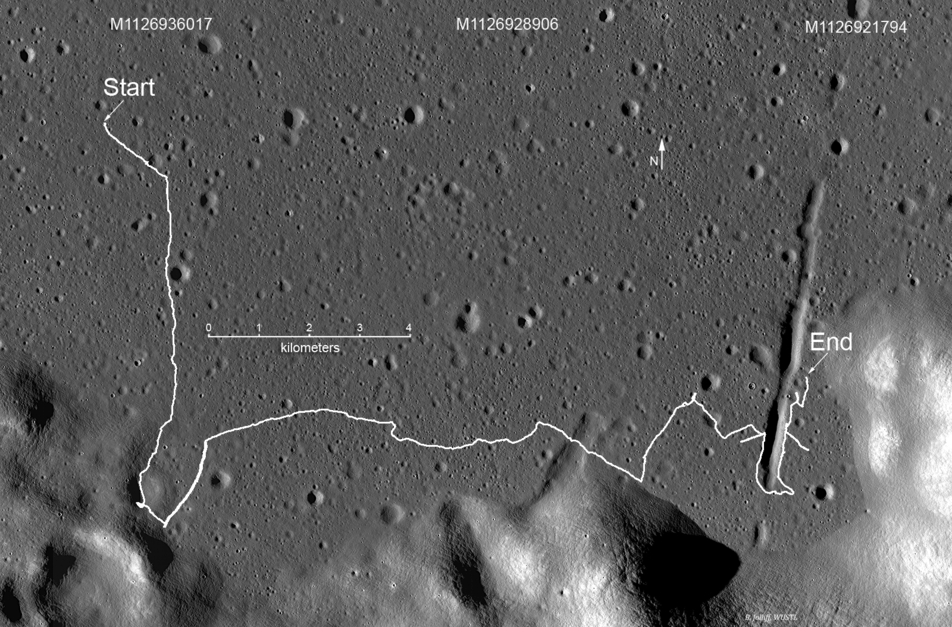 In summer 1973 it was announced that the program was completed and it is believed that Lunokhod 2 traveled around 39 km on Moon’s surface which is the second longest rover traveled distance recorded. Until 27 July 2014, this was the longest distance driven on another celestial body. The new record holder became NASA Mars rover Opportunity. Lunokhod 2 sent back 86 panoramic images and over 80,000 TV pictures. Many mechanical tests of the surface, laser ranging measurements, and other experiments were completed during this time.

The Moon today is British?!

The Lavochkin Association sold Lunokhod 2 and the Luna 21 lander $68,500 in December 1993 at a Sotheby’s auction in New York. The buyer was computer gaming entrepreneur and astronaut’s son Richard Garriott, who stated in a 2001 interview with Computer Games Magazine‘s Cindy Yans that:

“I purchased Lunakod 2 [sic] from the Russians. I am now the world’s only private owner of an object on a foreign celestial body. Though there are international treaties that say, no government shall lay claim to geography off planet earth, I am not a government. Summarily, I claim the moon in the name of Lord British!“