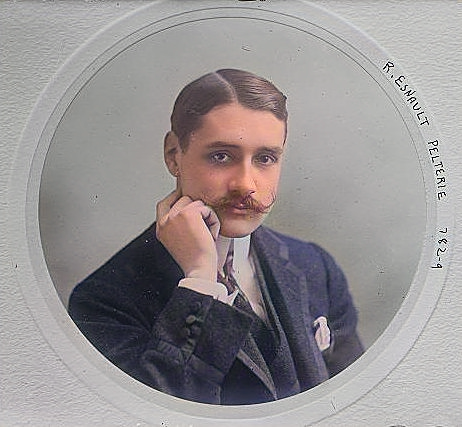 On November 8, 1881, French aviation pioneer Robert Albert Charles Esnault-Pelterie was born. Esnault-Pelterie improved the design of the Wright brothers 1902 glider and invented the aileron, a movable airfoil at the edge of the wing. In 1907, he built one of the first monoplanes, and proposed the idea of the ballistic missile for military bombardment.

Robert Esnault-Pelterie was born on November 8, 1881 in Paris as the son of a comfortably well-off cotton industrialist. He was educated at the Faculté des Sciences, and earned degrees at the Sorbonne in 1902 in botany, physics, and chemistry. After further studying engineering at the Sorbonne, he began his first experiments in aviation, which were based on the Wright brothers 1902 glider [1].

His first glider design was tested on a beach near Calais, but was not successful. His glider was based upon an incomplete understanding of the Wright glider built using secondhand information, and although using a version of the wing-warping which the Wright brothers had used to control their aircraft this did not work properly and was abandoned, since he considered it dangerous. After condemning the Wright brothers’ approach, he developed the concept of the aileron, fitting a pair of mid-gap control surfaces in front of the wings. Esnault-Pelterie continued to design and build his own gliders, then flew tests with them near Calais.

In 1906 he took the risk of being towed by an automobile, the better to study the mysteries of air pressure. His progress paralleled the advances of Bleriot [5] and on 19 September 1906 he succeeded to fly 500 m. He made his first powered flight on October 10, 1907, a distance of 100 m (330 ft) with the Pelterie I (or R.E.P. I). This was driven by a seven-cylinder, 30 hp air-cooled engine of his own design. In difference to the Wright’s, Esnault-Pelterie had designed a monoplane using internally braced wings, instead of a drag-producing system of external wires. Known as the R.E.P. (after the inventor’s initials), this was the first aeroplane with a completely enclosed fuselage of welded-steel tubing well ahead of the times, embodying an engineer’s idea of streamlining. Characteristically covered with red muslin, the R.E.P., ran along the ground on a single large bicycle wheel, with a smaller wheel at the end of each wing to maintain balance as the plane tipped to one side or the other, and a fourth wheel at the tail.[2]

From Pilot to Airplane Manufacturer

Trials of the monoplane Pelterie II began on June 8, 1908. This aircraft set a record with a 1,200 m flight, reaching an altitude of 30 m. After a modified version of this plane was flown for the last time in 1909 at Rheims, when a crash that ended Esnault-Pelterie’s career as a pilot. Pelterie stopped flying and instead focused on the development and manufacture of aircraft. On September 25, 1909, he was one of the co-founders of the Paris Air Show, the first exhibition to be devoted entirely to aviation and still one of the most important venues in the aviation industry.[4]

The Vickers R.E.P. Type Monoplane was based upon his designs, and marked the beginning of aircraft production at the later Vickers Limited. His family had invested heavily to fund his aircraft designs, and this had left them nearly financially ruined. However, he was the inventor of the “joystick” flight control, and owned a patent on the design. Following the war he was involved in litigation over his joystick patent. Many aircraft built during the war had used this design and the aircraft companies owed him royalties. The damages he won and subsequent royalties made him a wealthy man. This also allowed him to repay his father’s significant investment. Esnault-Pelterie served in World War I and was made an Officier de la Légion d’Honneur.

Esnault-Pelterie became interested in space travel, and, not knowing of Tsiolkovsky‘s 1903 work [3], in 1913 produced a paper that presented the rocket equation and calculated the energies required to reach the Moon and nearby planets. In this talk, he proposed the use of atomic energy, using 400 kg of radium to power an interplanetary vehicle. His culminating work was L’Astronautique (Astronautics), published in 1930, in which he coined the word “astronautics.” A later version published in 1934 included details on interplanetary travel and applications of nuclear power.

In 1929 Esnault-Pelterie proposed the idea of the ballistic missile for military bombardment. He believed such weapons could deliver huge payloads of explosives over hundreds of miles, a vision of the World War II V-1 and V-2 offensives by Nazi Germany. By 1930, Esnault-Pelterie and Jean-Jacques Barre had persuaded the French War Department to fund a study of the concept. In 1931, the two began experimenting with various types of rocket propulsion systems, including liquid propellants. The same year he ran a demonstration of a rocket engine powered with gasoline and liquid oxygen. During an experiment with a rocket design using tetra-nitromethane he lost three fingers from his right hand during an explosion. Unfortunately their work failed to galvanize an interest in rocketry within France.

Esnault-Pelterie also invented the rocket steering concept of the gimbaled or swiveling nozzle, which is used on all space launch vehicles today. He received over 200 patents for his inventions in fields such as metallurgy, electricity, magnetism, fluid dynamics, thermo-dynamics, combustion turbines, automobile suspensions, tidal energy and rocketry.[4] After the Second World War, he again made his knowledge available to space travel in conferences, but was more concerned with philosophical topics.