You are here: Home › engineering › Colonel Drake and the Dawn of the Oil Business 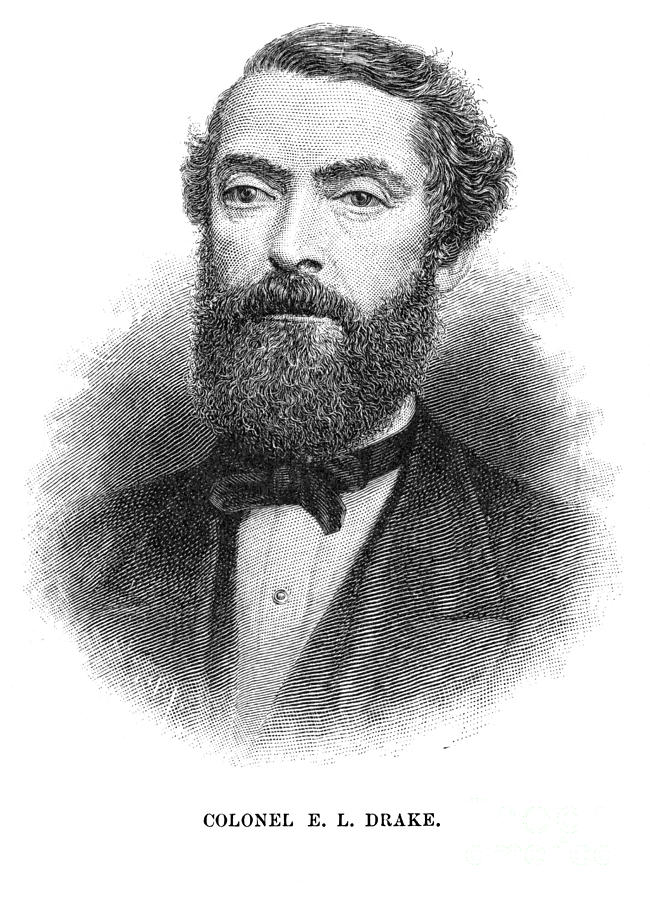 On March 29, 1819, Petroleum entrepreneur Edwin Laurentine Drake, also known as Colonel Drake, was born. He is popularly credited with being the first to drill for oil in the United States. His success launched an Oil Rush and brought the world a new energy source.

Edwin Drake was born in Greenville, Greene County, New York, as son of Lyman and Laura Drake. He grew up on family farms around New York State and Castleton, Rutland County, Vermont before leaving home at the age of 19. He spent the early parts of his life working the railways around New Haven, Connecticut as a clerk, express agent and conductor for the New York and New Haven Railroad. Ill health forced his retirement in 1857, but it also opened a new opportunity for him. Thus, by 1858, the Drake family found themselves living in Titusville, Pennsylvania.

What to do with Petroleum?

While petroleum oil was already known, there was no appreciable market for it. Samuel Martin Kier is credited with founding the first American oil refinery in Pittsburgh. In 1848, he began packaging petroleum oil as a patent medicine charging $0.50 per bottle.He also produced petroleum butter (petroleum jelly) and sold it as a topical ointment. Neither product proved to be a commercial success. After further experimenting, he discovered an economical way to produce kerosene and he became the first person in the United States to refine crude oil into lamp oil (kerosene). Along with a new lamp to burn Kier’s product a new market to replace whale oil as a lamp oil began to develop in 1854.

Seneca Oil, originally called the Pennsylvania Rock Oil Company, was founded by George Bissell and Jonathan Eveleth. They created the company after catching wind of reports that petroleum collected from an oil spring in Titusville, Pennsylvania was suitable for use as lamp fuel. Bissell found that the “rock oil” would be a practical alternative if a method could be devised to extract the oil from the ground. Interest in the Pennsylvania Rock Oil Company was initially low until a report commissioned by Bissell and Eveleth showed that there was significant economic value in petroleum. Before being offered a job by Bissell and Eveleth, Drake bought stock in Seneca Oil. But his job opportunity with the company arose because both parties were staying in the same hotel in Titusville. He was hired on a salary of $1,000 a year to investigate the oil seeps on land owned by Seneca Oil. One of the reasons, why the oil company chose the retired railway man maybe was because he had free use of the rail.

Drake decided to drill in the manner of salt well drillers. He purchased a steam engine to power the drill and hired William “Uncle Billy” A. Smith, a blacksmith and experienced salt well driller, to make the tools and do the drilling. The well was dug on an island on the Oil Creek. It took some time for the drillers to get through the layers of gravel. At about 5 meters the sides of the hole began to collapse. Those helping him began to despair, but not Drake. It was at this point that he devised the idea of a drive pipe. This cast iron pipe consisted of 3.0m long joints. The pipe was driven down into the ground. At about 10 meters they struck bedrock.

The drilling tools were now lowered through the pipe and steam was used to drill through the bedrock. The going, however, was slow. Progress was made at the rate of just one meter per day. After initial difficulty locating the necessary parts to build the well, which resulted in his well being nicknamed “Drake’s Folly“, Drake finally proved successful. On August 27, 1859, the drill slipped into a crevice six inches below the 69-foot depth of the drilled hole. Uncle Billy pulled up the tools and headed home. The next day when he went back to the well, he discovered oil floating on the water just a few feet from the derrick floor.

The Legacy of a “Crazy Man”

Although, Drake had never been an officer, let alone in the military, James M. Townsend, one of the investors, used the salutatory title “Colonel” in his correspondence with Drake. The title stuck and Drake became commonly know as Colonel Drake. Drake set up a stock company to extract and market the oil. But, while his pioneering work led to the growth of an oil industry that made many people fabulously rich, for Drake it didn’t work out. He failed to patent his drilling invention and furthermore lost all of his savings in oil speculation in 1863. He was to end up as an impoverished old man. In 1872, Pennsylvania voted an annuity of $1,500 to the “crazy man” whose determination founded the oil industry. On November 9, 1880 Edwin Drake passed away in Bethlehem, Pennsylvania, where he had lived since 1874.


Martin Blunt, Introduction to the oil industry and petroleum engineering, [7]