You are here: Home › chemistry › Elmer McCollum and the Discovery of Vitamins 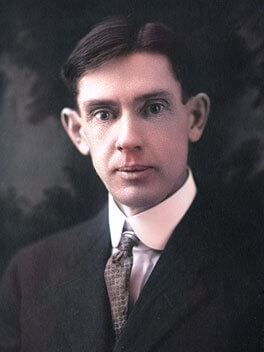 On November 15, 1967, American biochemist Elmer McCollum passed away. McCollum is known for his work on the influence of diet on health. Together with Marguerite Davis McCollum discovered the first vitamin, named A, in 1913. He also helped to discover vitamin B and vitamin D and worked out the effect of trace elements in the diet.

Elmer McCollum was born on March 3, 1879, to Cornelius Armstrong McCollum and Martha Catherine Kidwell McCollum on a farm 3 miles from Redfield, Kansas. His parents only had received little education. Elmer grew up on the parental farm and attended a small local school. At some point he had surgery for a detached retina, which the doctors were unable to “glue back again”. His father suffered from tuberculosis.  In 1896 his mother moved their family to Lawrence, Kansas. McCollum failed the general certification examination, but was allowed to enter high school provisionally based on his habit of extensive reading and his memorization of standard poetry. He worked his way through high school and college, including time spent as a gas lamplighter.

From Medical Science to Organic Chemistry

In 1903, Elmer McCollum graduated from the University of Kansas. While there, he abandoned the dream of becoming a doctor, and during his sophomore year, he consumed organic chemistry, earning a bachelor’s degree in three years, followed by his master’s in 1904. He secured a scholarship to Yale University in 1904, and wrote his thesis on pyrimidines. McCollum got his Ph.D. from Yale in two years. He remained for another year as a postdoctoral researcher working with Thomas Osborne and Lafayette Mendel on plant protein and diet. Then Mendel found a position for McCollum at the University of Wisconsin–Madison, not in his preferred organic chemistry, but as an instructor in agricultural chemistry.

The Analysis of Cow Feed

At Wisconsin, Elmer McCollum was assigned to analyze cow feed and the animal’s milk, blood, feces, and urine for the famous single-grain experiment, directed by department chief Stephen Babcock [3] and his successor Edwin B. Hart. Back then, chemists were trying to create the perfect foods for farm animals. McCollum continued to search for a breakthrough in human and animal nutrition. He determined that he must find out what was lacking in the animals’ purified diets, and that he needed to experiment on animals with a short life span, finally deciding on rats. Hart and his team published their findings in 1911 in Physiological Effect on Growth and Reproduction of Rations Balanced from Restricted Sources. The researchers and Babcock, the leader, could see the results but, they write, “At present we have no solution for the observations made.” McCollum summarized, “something fundamental remained to be discovered.”

The biological Method for the Analysis of Food

He began working with Marguerite Davis who helped McCollum develop “the biological method for the analysis of food“, and she co-authored a number of papers. Among them was “The Necessity Of Certain Lipins In The Diet During Growth” in 1913. They fed rats pure casein, carbohydrates, with a little agar-agar and a mixture of six or seven salts. They substituted lard or olive oil for some of the carbohydrates for a group of rats. For 70 to 120 days, their rats grew, and then they stopped growing. They still appeared to be healthy, except the females did not have enough milk to nourish their young. They successfully restored about thirty rats to normality, after these rats had reached the stage of growth suspension, by adding a small amount of extracts of egg or butter. Their paper included charts for five rats, illustrating their weights over time compared to a normal growth curve, meant to show McCollum and Davis’s “almost invariable success in inducing a resumption of growth after complete suspension for a time“. One chart showed their results with a fat-free diet. They became convinced that without a substance in the egg or butter extract, rats could not grow, even though they appeared to be healthy.

The scientists concluded that rats stoped growing until they are fed certain “ether extracts of egg or of butter“, and that “there are certain accessory articles in certain food-stuffs which are essential for normal growth for extended periods“. They also found this food factor in extracts of alfalfa leaves and in organ meats. This substance that McCollum called “factor A,” was later called vitamin A. McCollum and Davis, who ultimately received credit for the discovery, submitted their paper for publication three weeks before Osborne and Mendel. Both papers appeared in the same issue of the Journal of Biological Chemistry in 1913. McCollum opposed Casimir Funk‘s 1912 name vitamines (from vital amines). They thought the prefix “vita” gave the substance too much importance, and that the ending “amine” means something specific in organic chemistry, but they only had scant evidence of one amino group.

McCollum introduced the designation of vitamins with capital letters of the alphabet in 1916. With Edward Mellanby, he showed in 1919 that dogs and rats in which rickets had been produced by artificial feeding can be cured by the administration of cod liver oil (containing a lot of vitamin D). In 1920 he was elected to the National Academy of Sciences, became a member of the Leopoldina in 1925, a member of the American Philosophical Society in 1945 and a Foreign Member of the Royal Society in 1961. In his honor, McCollum Peak, a mountain in the Antarctic, has borne his name since 1959. After his 1944 retirement as professor emeritus, he spent ten years writing The History of Nutrition. McCollum died on November 15, 1967, at the age of 88.