You are here: Home › physics › C. V. Raman and the Raman Effect 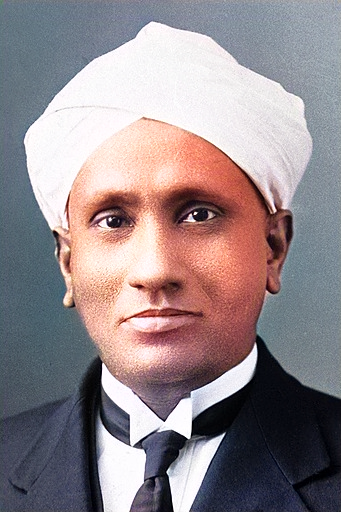 On November 7 1888, Indian physicist and Nobel Laureate Sir Chandrasekhara Venkata Raman was born. Raman carried out ground-breaking work in the field of light scattering, which earned him the 1930 Nobel Prize in Physics. He discovered that when light traverses a transparent material, some of the deflected light changes in wavelength. This phenomenon, subsequently known as Raman scattering, results from the Raman effect.

C. V. Raman was born on November 7, 1888, the son of a mathematics and physics lecturer in Tiruchirappalli (Trichinopoly) in southern India. He first studied at the Presidency College in Madras,  and later received his Bachelor of Arts from the University of Madras. In 1907 he gained his Master of Sciences degree with the highest distinctions from University of Madras. Since at that time there were unfavorable conditions for an academic career, he accepted a position with the Indian Ministry of Finance – but he found opportunities to continue his experimental research in the laboratory of the Indian Society for the Advancement of Science in Calcutta (Kolkata) in his meager spare time. In 1917 he was offered the newly created Palit Chair of Physics at the University of Calcutta, which he accepted. He moved to the Indian Institute of Science in Bangalore as a professor in 1933 and after 1948 was director of the Raman Institute of Research, which he himself established and supervised.

There, the scientist led experiments with collaborators, including K. S. Krishnan, on the scattering of light, when he discovered what now is called the Raman effect. This work gave further proof of the quantum nature of light and highly contributed to the field of physics. Already in 1923, the inelastic scattering of light was predicted by Adolf Smekal, and this is why in German, it is often referred to as the Smekal-Raman effect. Due to the inelastic interaction, an energy transfer takes place, i.e. the scattered light has a higher or lower frequency than the incident light beam and is specific for the scattering atom or molecule. Due to the smaller scattering cross-section, however, the proportion of frequency-shifted light is lower by a factor of 103 to 104 than the light of elastic scattering, which is referred to as Rayleigh scattering.

The Raman spectroscopy came to be based on this phenomenon. Ernest Rutherford referred to it in his presidential address to the Royal Society in 1929. The spectrum of the Raman-scattered light depends on the molecular constituents present and their state, allowing the spectrum to be used for material identification and analysis. Raman spectroscopy is used to analyze a wide range of materials, including gases, liquids, and solids. Highly complex materials such as biological organisms and human tissue can also be analyzed by Raman spectroscopy.

In 1930, C. V. Raman won the Nobel Prize in Physics “for his work on the scattering of light and for the discovery of the Raman effect“. He was the first Asian and first non-white to receive any Nobel Prize in the sciences. Before him the Indian Rabindranath Tagore had received the Nobel Prize in Literature in 1913.

Raman founded the Indian Journal of Physics in 1926 and promoted the establishment of an Indian Academy of Sciences, which he chaired as its founding president. Raman died in Bangalore on November 21, 1970 of a cardiac arrest. His nephew Subrahmanyan Chandrasekhar was awarded the Nobel Prize in Physics in 1983.