On September 17, 1857, Russian and Soviet rocket scientist and pioneer of the astronautic theory Konstantin Tsiolkovsky was born. He is considered to be one of the founding fathers of rocketry and astronautics and contributed to the success of the Soviet space program.

“Man will not always stay on Earth; the pursuit of light and space will lead him to penetrate the bounds of the atmosphere, timidly at first, but in the end to conquer the whole of solar space.” – Konstantin Tsiolkovsky

At the age of ten Tsiolkovsky became almost deaf due to a scarlet disease and had to leave school. He continued his autodidactic education and was sent by his family to Moscow to study. There he studied physics, astronomy, mechanics and geometry. After three years Tsiolkovsky was brought home by his father. He then taught mathematics and physics in his home town until 1882 when he was appointed mathematics teacher at the Borovsk district school in Kaluga governorate. In the meantime he had married and had become a father. During the Russian Revolution he lived very secluded. Like many other scientists, Tsiolkovsky was inspired by the futuristic fiction stories of Jules Verne. Built on his stories’ foundations, the engineer designed and theorized lots of space travel occasions and rocket propulsion wherefore he is considered to be the father of spaceflight.

Near Moscow, Tsiolkovsky started his teaching career and still managed to continue his scientific discoveries. During his life time, he authored over 400 scientific works of which 90 were related to space travel and he supported philosophical discussions on space flight through his theory of rocketry. Next to his numerous rocket designs, he created many on actual space stations and airlocks for exiting space ships in space’s vacuum and built plans for biological systems providing food and oxygen for space colonies.

In the 1890’s, Tsiolkovsky spent much time working on a metal dirigible with the ability to shrink or expand. At a time when the term ‘airship’ was not even invented yet, Tsiolkovsky proposed his plans on the all-metal dirigible and published the first work on the subject called “A Controllable Metallic Balloon” in 1892. He developed his own aerodynamics laboratory, assumed to be the first in Russia and even constructed his own wind tunnel with a testing department. His experiments and of course their results depicted a significant foundation for the famous scientist Nikolay Zhukovsky, who became known for being the father of modern aerodynamics and hydrodynamics. 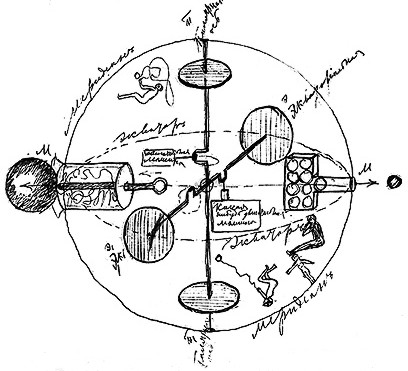 In the later 1890’s Tsiolkovsky started studying the motion of jet machines and developed formulas on speed, fuel impulses and masses. His article “Investigation of Outer Space Rocket Devices” was published in 1903 and in it he was able to prove that rockets could perform space flight. Since the brilliant engineer was way ahead of his time, his papers were often not taken seriously at first, which disappointed him.

Still, he was honored for his work in his later lifetime and received a lifetime pension by the government. It is known that Tsiolkovsky’s theories were quite impractical which may have been the cause of his limited experimentation budget which he had to pay for himself. However, later scientists like Wernher von Braun were highly influenced by Tsiolkovsky. Leading Soviet rocket-engine designer Valentin Glushko and rocket designer Sergey Korolev studied Tsiolkovsky’s works as youths,  and both sought to turn Tsiolkovsky’s theories into reality