You are here: Home › zoology › Pierre André Latreille – The Prince of Entomologists

Pierre André Latreille was born on November 29, 1762 in the town of Brive, then in the province of Limousin, France. He was an illegitimate child of Jean Joseph Sahuguet d’Amarzits (1713-1783), General Baron d’Espagnac, and an unknown mother whose surname “Latreille” was formally assigned to him in 1813. Born in simple circumstances, orphaned and destitute in 1778, Latreille found sponsors in Paris and was adopted by the mineralogist Abbé Haüy. He studied first in Brive, and later in Paris to become a priest. In 1780 he joined the Grand Séminaire of Limoges and left it as a deacon in 1786. He returned to Brive in 1786 as a deacon, where he devoted all his free time to entomology.

How a Beetle saved his Life

Already during his studies, Latreille had taken on an interest in natural history, visiting the Jardin du Roi planted by Georges-Louis Leclerc, Comte de Buffon, and catching insects around Paris.[4]  In 1788 he returned again to Paris, where he caused a stir with his treatises on the French ant wasps (Mutillidae). Unfortunately after the start of the French Revolution, the Civil Constitution of the Clergy was declared in 1790, which required priests to swear an oath of allegiance to the state. Latreille failed to do so and was therefore imprisoned in November 1793 under threat of execution. For a while he was imprisoned in Bordeaux, but he regained his freedom through his acquaintance with the naturalist Jean Baptiste Bory de Saint-Vincent. Fortunately however with the help of the prison’s doctor, Latreille among with a cellmate was released and started a life as a teacher. Also, he began to correspond with several enomologists including Johan Christian Fabricius.[5] Back in prison, Latreille found a beetle on the dungeon floor. Latreille explained to the doctor that this was a rare insect and as he was so impressed, the physician sent the beetle to a naturalist who knew Latreille’s work and managed to have him released from prison. Fabricius described the beetle in 1775, but recognizing it had saved Latreille’s life. 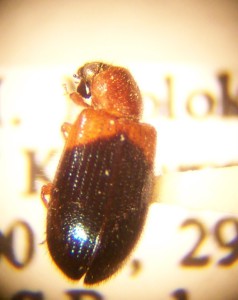 Work at the Museum

In 1796 with Fabricius’ encouragement he published Précis des caractères génériques des insectes, disposes dans un ordre naturel (Precise generic characteristics of insects, arranged in a natural order). In 1798, Latreille was appointed to the museum, where he worked alongside Jean-Baptiste Lamarck, curating the arthropod collections, and published a number of zoological works.[6] Latreille succeeded Guillaume-Antoine Olivier in 1814 as titular member of the Académie des sciences de l’Institut de France and in the following years, Latreille managed to produce several important papers for the Mémoires du Muséum, all of the volume on arthropods for George Cuvier‘s Le Règne Animal,[7] and hundreds of entries in the Nouveau Dictionnaire d’Histoire Naturelle on entomological subjects. He also took on an increasing proportion of Lamarck’s teaching as the latter’s health began to decline. Latreille was made a knight of the Légion d’honneur in 1821 and succeeded Lamarck as professor of entomology in the same decade.

For some time he worked as a professor of zoology at the Veterinary College in Alfort, École nationale vétérinaire d’Alfort near Paris. After the death of Jean-Baptiste de Lamarck in 1830, the chair of invertebrate zoology at the Museum of Natural History was divided, Latreille was appointed professor of crustaceans, arachnids and insects, and Henri Marie Ducrotay de Blainville was appointed professor of molluscs and worms. On 31 January 1832, in Paris, Latreille founded the Société entomologique de France, the Entomological Society of France, which he presided over until the end of his life. Unfortunately, Latreille’s health also declined and he gave much of his responsibilities to his assistants. After the death of his wife, Latreille returned to Paris. He died of bladder disease in 1833. The Société entomologique erected a monument in Latreille’s honor over his grave.

Latreille was significant as the first person to attempt a natural classification of the arthropods. His “eclectic method” of systematics incorporated evidence from all available characters without assuming a pre-defined goal; Latreille repeatedly dismissed anthropocentrism and teleology. As well as many species and countless genera, the names of many higher taxa are also attributable to Latreille, including Thysanura, Siphonaptera, Pycnogonida, Ostracoda, Stomatopoda, Decapoda, Amphipoda, Isopoda, Xiphosura, Melipona and Myriapoda. From 1796 to 1833 Latreille published a large number of writings which made him one of the founders of modern entomology. He not only described a large number of new species, but also grouped them into newly introduced genera and families, thus making an important contribution to biological systematics. As testimony to the high esteem in which Latreille was held, many books were dedicated to him, and up to 163 species were named in his honour between 1798 and 1850.

Donna Hirschfelt and Lynn Wunderlich, Introduction to Entomology, Part I, [10]