You are here: Home › biology › Carl Linnaeus – ‘Princeps Botanicorum’, the Prince of Botany

On May 23, 1707, Swedish botanist, physician, and zoologist Carl Linnaeus – or after his ennoblement Carl von Linné or more fashionable in Latin Carolus Linnaeus – was born. Linnaeus formalised the modern system of naming organisms called binomial nomenclature. He is known by the epithet “father of modern taxonomy“.

“Every genus is natural, created as such in the beginning, hence not to be rashly split up or stuck together by whim or according to anyone’s theory.”
— Carl Linnaeus, Systema naturae (1735) (quoted in Ramsbottom 1938:197)

Carl Linnaeus was born in the village of Råshult in Småland, Sweden, as the first child of Nicolaus (Nils) Ingemarsson (who later adopted the family name Linnæus), a Lutheran minister and amateur botanist, and his wife Christina Brodersonia. Linnaeus’ father began teaching him basic Latin, religion, and geography at an early age. After some difficulties right at the start – he was a rather sluggish student and his dissappointed father saw no other option than to apprentice him to a cobbler – Linné soon realized that academia might not be the worst choice and begged for a second chance, which was granted.

In 1727, Linnaeus, age 21, enrolled in Lund University in Skåne to study medicine. Professor Kilian Stobæus, natural scientist, physician and historian, offered Linnaeus tutoring and lodging, as well as the use of his library, which included many books about botany. In his spare time, Linnaeus explored the flora of Skåne, together with students sharing the same interests. In August 1728, Linnaeus decided to attend Uppsala University, where he met a new benefactor, Olof Celsius, who was a professor of theology and an amateur botanist. Celsius received Linnaeus into his home and allowed him use of his library, which was one of the richest botanical libraries in Sweden. In 1729, Linnaeus wrote a thesis, Praeludia Sponsaliorum Plantarum on plant sexual reproduction.

In 1730/31 Linné worked on a catalogue of the plants of the Botanical Garden of Uppsala, of which several versions were made. In the beginning the plants were arranged according to the Tournefort system for the classification of plants, but Linné had more and more doubts about its validity. In the final version of July 1731, which he finished in Stockholm, he arranged the plants according to his own system of 24 classes. During this time, the first drafts of his early works, which were published in Amsterdam, were created. In the spring semester of 1733 Linné held private courses in docimastics and wrote a short treatise on the topic which was new to him. He catalogued his collection of birds and insects and worked on numerous manuscripts. In 1735, Linnaeus went to Amsterdam to obtain his doctoral degree.  Previously, Linné had shown Jan Frederik Gronovius and Isaac Lawson some of his manuscripts, including a first draft by Systema Naturae. Both were so impressed by the originality of Linnaean’s approach to classifying the three natural kingdoms of minerals, plants and animals that they decided to publish the work at their own expense. Gronovius and Lawson acted as proofreaders for this and other works by Linné created in Holland and monitored the progress of printing. In the same year, the mayor of Amsterdam appointed Linnaeus head of his extensive botanical and zoological gardens in Hartkamp near Harlem.

Linnaeus and the Classification System for Species

One of Linnaeus` greatest achievements was the creation of a practicable classification system for species. This was based on intensive observation of nature and the description of living beings. He arranged the species he described according to clear and reliably recognizable characteristics, the plant species e.g. after the construction of the flower, especially according to the number and arrangement of the stamens and pistils (Linné’s sexual system). He gave names according to a fixed scheme, which is still valid today. Species are named in two parts, e.g. the marsh violet Viola palustris L., which was first described by Linnaeus himself. All of them, animals and plants, were given two-tiered names consisting of genus names and an adjective, the epithet, which together with the genus name designates the species. The naming of Linnaeus is still valid today for the formation of the species names (binary or binomial nomenclature) due to its systematic arrangement in the grouping.

Linnaeus himself has described over 7,000 plant species and over 4,000 animal species. Contemporaries of him said: “God created the world, but Linnaeus ordered it”. This large number of descriptions was only possible because Linnaeus sent his students all over the world. Many died on these dangerous expeditions: Johann Bartschat the age of 28 in Suriname, Christopher Tärnström on a trip to China, Pehr Löfling only 27 years old in Venezuela, Peter Forskäl in Arabia. Partially Linnaeus named plant genera in memory of his students and the names are still reminiscent of the death-defying researchers. 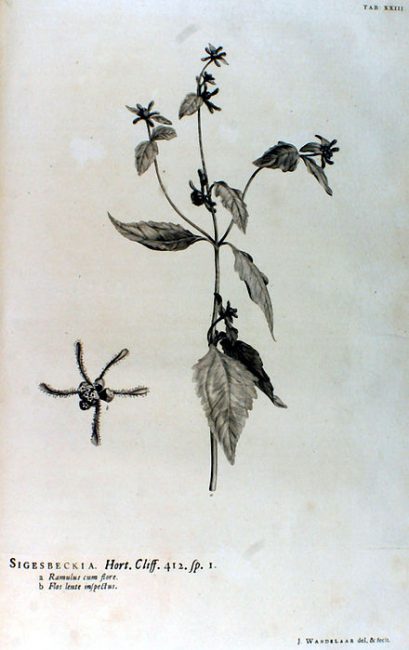 In Hortus Cliffortianus, Linné named the genus Sigesbeckia after Johann Georg Siegesbeck, who shortly afterwards became one of his severest critics.
The drawing is by Jan Wandelaar.

Linnaeus is reported not being the most modest man of his time. He even suggested that his grave stone should bear the inscription Princeps Botanicorum (similar to the title having been granted to Carl Friedrich Gauss, the Prince of Mathematicians).[7]

Linneaus’ idea was to categorize everything hierarchically. A certain species belongs to a special genus, several genera belong to a special family, which is further summarized in orders, classes, subphyla, phyla, kingdoms, and domains. So, e.g., man is of the genus Homo and of the species Sapiens. We belong to the family of Hominidae, which is part of the order Primates, which belong to the class Mammalia, which belong to the subphylum Vertebrae, belonging to the phylum Chordata. Furthermore we belong to the kingdom animalia and the domain eucaria. This is the Taxonomy we use today.

In the last years of his life Linnaeus was busy working on the twelfth edition of Systema Naturae (1766-1768). The attached works Mantissa Plantarum (1767) and Mantissa Plantarum Altera (1771) were created. In them he described new plants which he had received from his correspondents from all over the world.

In May 1774 he suffered a stroke during a lecture in the Botanical Garden of Uppsala University. A second stroke in 1776 paralyzed his right side and restricted his mental abilities. Carl von Linné died on 10 January 1778 of a bladder ulcer.