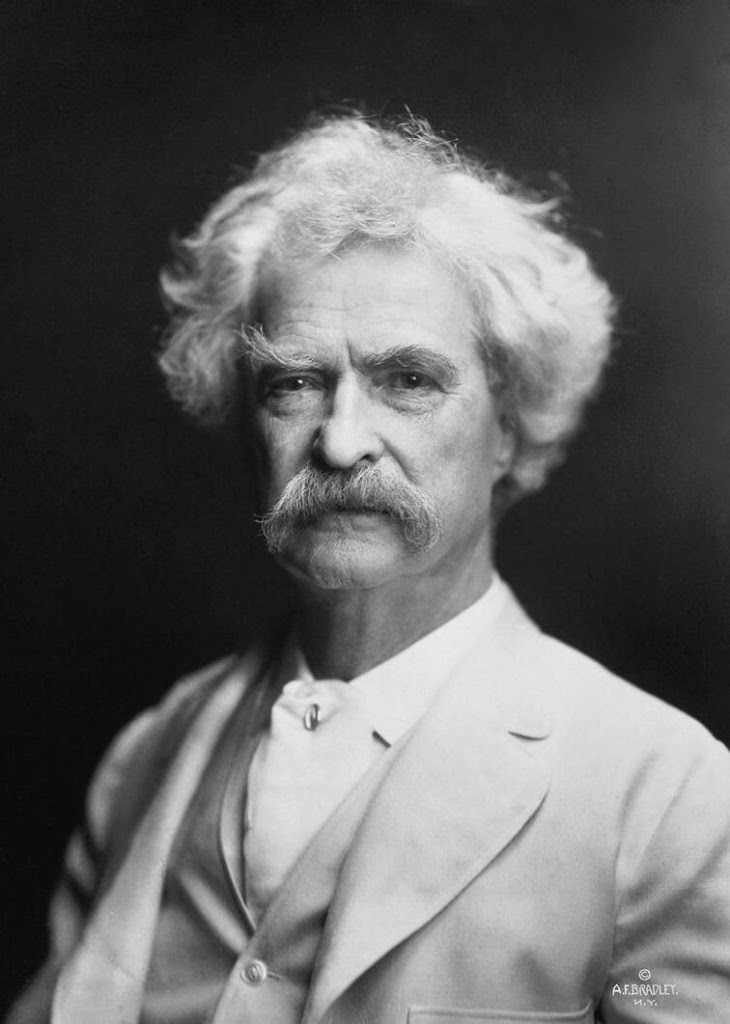 On November 30, 1835, famous American author Samuel Longhorn Clemens, better known by his pen name Mark Twain, was born in the tiny village of Florida, Missouri. He is most noted for his humorous novels about the mischievous boys Tom Sawyer and Huckleberry Finn and their adventures on the mighty Mississippi River.

His father John Clemens worked as a storekeeper, lawyer, judge, and land speculator, who sometimes only hardly could feed his family and was attributed never to be seen smiling. In 1839, the Clemens family moved 35 miles east to the crescent town of Hannibal, a growing port city on the banks of the Mississippi, a frequent stop for steam boats arriving from St. Louis and New Orleans. In his early years, Twain was a mischievous boy, the prototype of his character Tom Sawyer. Though he suffered from poor health and often wasn’t allowed to leave the house, by age nine he had already learned to smoke, led a small band of pranksters, and had developed an aversion to school. Only aged 12, he lost his father by pneumonia and the Clemens family almost became destitute. Twain left school and became an apprentice in a printer’s shop and later became an editorial assistant at the Hannibal Journal. It was here that young Samuel discovered the joy of writing.

At 17, he left for a printer’s job in St. Louis, where he switched his intentions and started a career as a river pilot’s apprentice. Clemens’ pseudonym, Mark Twain, comes from his days as a river pilot, where it is a specific river term denoting ‘two fathoms’ or 4 meters, when the depth of water for a boat is being sounded. “Mark twain” means that is safe to navigate. With the outbreak of the American Civil War in 1861‚ all traffic along the river came to a halt‚ and inspired by the times‚ Twain joined a volunteer Confederate unit‚ but quit again after just two weeks.

In search for a well suited career, he traveled west to Nevada, where after failing as a silver prospector‚ he began writing for a Virginia City newspaper. This was, where he for the first time used his pen name‚ Mark Twain. In 1864‚ he headed for San Francisco where he continued to write for local papers. His first stories appeared in 1864/65 in Charles Henry Webb’s weekly The Californian.  It was in 1865, when he had his very first success as a writer with his humorous short story “The Celebrated Jumping Frog of Calaveras County“. He was then able to earn a living by speaking as part of a continuing education program for the population and began writing for New York magazines.

Now, he traveled throughout the entire country, meeting famous contemporaries Frederick Douglass, Harriet Beecher Stowe and Charles Dickens, and visited various countries in Europe, Hawaii, and the Holy Land. His first travel book The Innocents Abroad (1869) is based on a five-and-a-half-month cruise to Europe and the Middle East, which he undertook in 1867. In A Tramp Abroad (1880), Mark Twain processed the experiences of his second trip to Europe in 1878, which took him through Germany, Switzerland and Italy. In this book he also published the famous essay The Awful German Language in which he humorously explains the peculiarities and difficulties of the German language.

“Some German words are so long that they have a perspective. Observe these examples: Freundschaftsbezeigungen., Dilletantenaufdringlichkeiten., Stadtverordnetenversammlungen. These things are not words, they are alphabetical processions.”
— Mark Twain, A Tramp Abroad (1880)

In 1870 Twain married Olivia ‘Livy’ Langdon in Hartford, Connecticut, where in 1874 he built a home. Apart from numerous short stories during this time he wrote many of his classic novels, among them ‘The Adventures of Tom Sawyer‘ (1876), ‘The Prince and the Pauper‘ (1881), ‘Life on the Mississippi‘ (1883), ‘Adventures of Huckleberry Finn‘ (1885) and ‘A Connecticut Yankee in King Arthur’s Court‘ (1889). In 1874 Mark Twain bought a Remington Arms typewriter in Boston and was the first author to deliver a typewritten book manuscript to his publisher, Life on the Mississippi. Due to an autobiographical note, this fact is often wrongly attributed to his work Tom Sawyer’s Adventures. 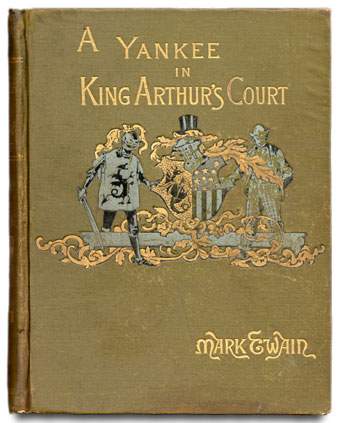 Cover of the book «A Connecticut Yankee in King Arthur’s Court» by Mark Twain, 1889

Twain was fascinated with science and scientific inquiry. He developed a close and lasting friendship with inventor Nikola Tesla [6] and even patented three inventions himself, including an “Improvement in Adjustable and Detachable Straps for Garments” (to replace suspenders). Although Twain made a substantial amount of money through his writing, he lost a great deal through investments, mostly in new inventions and technology. By 1895, he set off on a world lecture tour to Australia, Canada, Ceylon, India, New Zealand, and South Africa to pay his debts off, during which he met Sigmund Freud and Booker T. Washington.[7]

“When I was a boy, there was but one permanent ambition among my comrades in our village on the west bank of the Mississippi River. That was, to be a steamboatman.”
— Mark Twain, from ‘Old Times on the Mississippi’, 1875

On 21 April 1910, Mark Twain passed away in Redding, Connecticut.

Mark Twain’s satire is often so revealing and biting that numerous youth book editions by Tom Sawyer or Huckleberry Finn were defused. Here, as in the classic children’s book The Prince and the Pauper, he shows the world of the poor, lower social classes. In his work as a journalist, he denounced religious hypocrisy, police attacks on minorities, corrupt and fraudulent senators. He criticized the greed for power and the “lust for money,” which he called America’s disease. He was particularly polemical about Christian Science and its founder Mary Baker Eddy. He was negatively impressed by the rapid growth of this movement, but later corrected his harsh criticism.

Mark Schenker, “As Webster Is My Witness” Language, Lies, and Laughter in Mark Twain, [9]