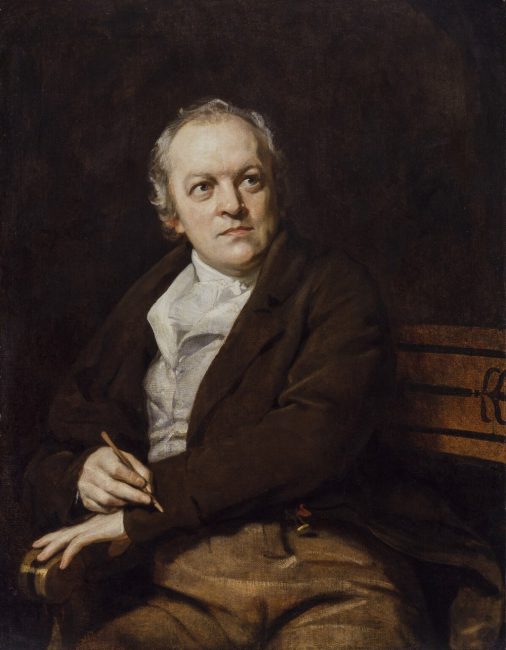 On November 28, 1757, English poet, painter, and printmaker William Blake was born. Blake is now considered a seminal figure in the history of the poetry and visual art of the Romantic Age. Both his artistic and literary works were largely rejected by his contemporaries. It was not until the mid-19th century that his very innovative works were discovered by the Pre-Raphaelites, gained general recognition, and later became popular in pop culture.

Even as a child, William Blake is said to have had “second sight” and visions of angels and prophets, which he processed in poems and paintings. Blake’s parents were dissenters from the High Church and probably belonged to the Moravian Brethren. The Bible was among the formative influences on Blake and remained a source of inspiration for him throughout his life. William’s father was a middle class stocking maker and merchant. His parents realized early on that their son’s headstrong temperament made him ill-suited for school or a regular job, so William never attended school. He was taught at home by his mother, Catherine Wright Armitage Blake, and was enrolled in one of London’s most important drawing schools by the age of ten. In 1772, Blake began an apprenticeship with the engraver James Basire. After completing this, Blake became a student at the Royal Academy of Arts in 1779. With his admission to the Royal Academy of Arts, William Blake seemed destined for a successful career as a history painter. But he fell out with the Academy president, portrait painter Sir Joshua Reynolds, who disapproved of Blake’s work. His hopes for a career as a history painter were dashed.

In 1782 he married Catherine Boucher. Although she came from a humble background, she educated herself through her own studies and helped Blake with her technical skills to produce some of his best-known works. In 1784, Blake opened a print shop in London and worked as an engraver and illustrator until his death, poor and largely unappreciated. However, he found various friends and benefactors who helped him through periods of greatest financial difficulty by commissioning work, among other things. Among them was the poet William Hayley. After initial contacts between Hayley and Blake in 1800, Blake decided to move to Felpham, Sussex, the place where Hayley lived. William Blake and his wife spent three years there, and then moved back to London for the rest of their lives. The marriage, which lasted 45 years, remained childless, possibly apart from a stillborn baby girl. Blake’s poetry and his poetry are remembered today as the most important of his life. 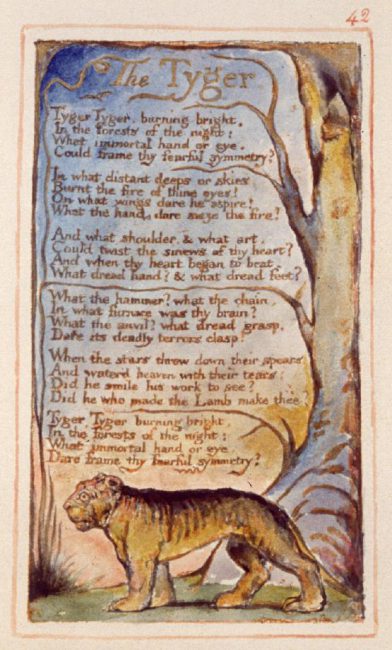 A prophetic eye for the dangers or aberrations of modernity

“O Rose thou art sick.
The invisible worm,
That flies in the night
In the howling storm:

Has found out thy bed
Of crimson joy:
And his dark secret love
Does thy life destroy.”
– William Blake, Songs of Experience (1794), The Sick Rose, plate 39.

From today’s perspective, Blake’s poetry is among the most important works of English poetry; his drawings are considered among the great works of English art. During his lifetime, on the other hand, Blake was long regarded as an incomprehensible visionary whose mystical worldview was seen as an expression of spiritual confusion. It was not until very late in his life, around 1818, that Blake was able to witness a new generation of artists (albeit a limited number) begin to appreciate his work. The concept of the artist as a prophetic force and spiritual guide had become increasingly important in the meantime. However, Blake’s actual originality and his prophetic eye for the dangers or aberrations of modernity have been recognized predominantly only in the 20th century. At the same time, he was at the same time appropriated as a “liberator” especially in the esoteric alternative culture in the last third of the 20th century. 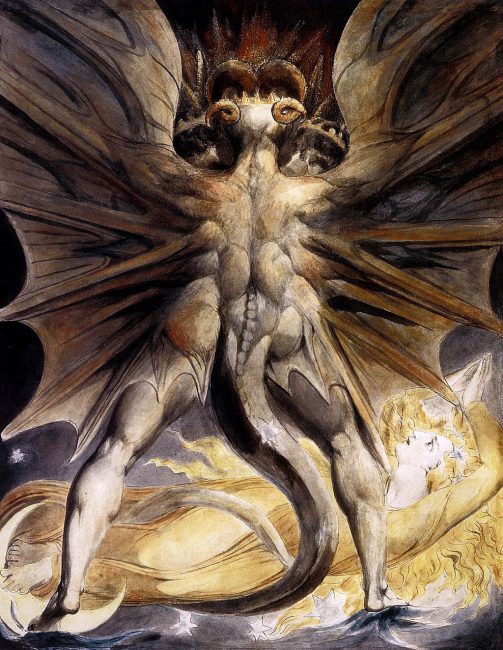 William Blake, The Red Dragon and the Woman Clothed in Sun (1803)

“Tyger! Tyger! burning bright
in the forests of the night,
What immortal hand or eye
Could frame thy fearful symmetry?”
– William Blake, The Tyger (1794)

Blake not only abhorred slavery, but also believed in the equality of races and sexes. He combined these astonishingly modern-seeming views with a near-natural spirituality developed against the established churches and a deep distrust of emerging materialism. Blake’s views were often shocking to the orthodox Christians of his day, although he always felt closely connected to the New Testament in his own way. One of Blake’s strongest objections to Christian doctrine was that it took a stand for the suppression of natural desire and against lively sensual pleasure. In Vision of the Last Judgements Blake wrote: „Men are admitted into Heaven not because they have curbed & govern’d their Passions or have No Passions, but because they have Cultivated their Understandings“. Blake combined the veneration of the human mind with a visionary vision that was often interpreted by contemporaries as madness, but for Blake represented an expansion of understanding, an expansion of consciousness. In this respect, it is understandable that both the writer Aldous Huxley,[1] who experimented with mescaline in one of his books, and the rock group The Doors, which used psychedelic elements, named themselves and one of their works after the opening line of one of Blake’s most famous sayings: The Doors of Perception.

„If the doors of perception were cleansed, every thing would appear to man as it is, infinite.“ 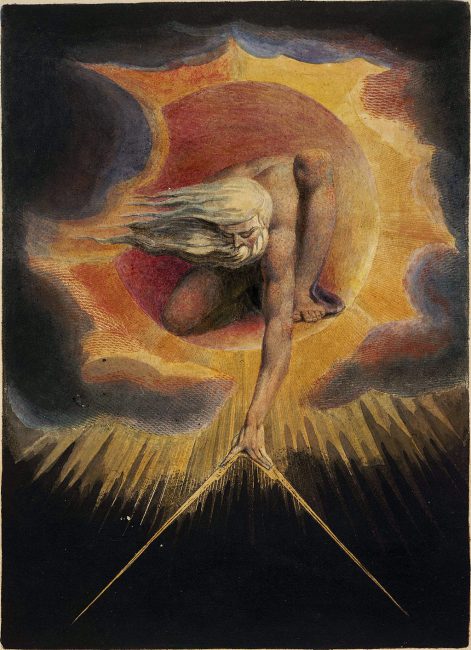 “Time is the mercy of Eternity; without Time’s swiftness Which is the swiftest of all things, all were eternal torment.”
– William Blake, Milton (1804), Book the First, 24:72

Blake reported about himself that his everyday perceptions were incessantly accompanied and superimposed by visions. For example, at sunrise he saw not only the return of light, but a rejoicing choir of angels. Nature and the world were therefore only signs for him and in this sense gateways to heaven and the eternal world of the hereafter, to which Blake’s real interest was directed. As a radical artist, Blake became a one-man entrepreneur who produced his books single-handedly: he wrote the verses, designed the images, produced the printing plates using the relief etching process he had invented, and colored the prints, assisted by his wife. In this way, he escaped commercial constraints, but lost part of his audience. 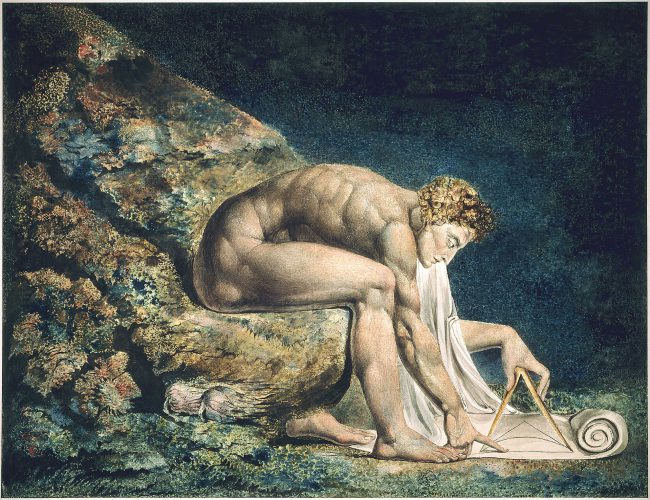 On the day of his death (12 August 1827), Blake worked relentlessly on his Dante series. Eventually, it is reported, he ceased working and turned to his wife, who was in tears by his bedside. Beholding her, Blake is said to have cried, “Stay Kate! Keep just as you are – I will draw your portrait – for you have ever been an angel to me.” Having completed this portrait (now lost), Blake laid down his tools and began to sing hymns and verses. At six that evening, after promising his wife that he would be with her always, Blake died.