You are here: Home › biology › Johan Christian Fabricius and his Classification System for Insects 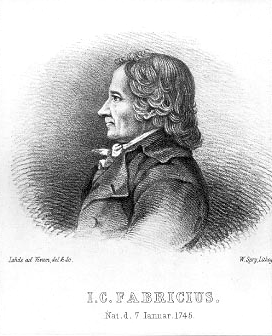 On January 7, 1745, Danish zoologist Johan Christian Fabricius was born. He was a student of Carl Linnaeus [1], and is considered one of the most important entomologists of the 18th century, having named nearly 10,000 species of animal, and established the basis for modern insect classification.

Johan Christian Fabricius was born in Tønder in the Duchy of Schleswig, where his father was a doctor. Already while still a child, Johan Christian made an early contribution to biological nomenclature by converting names in notes written by his father using the Tournefort system into the new system that had just been introduced by Carl von Linné, whom he greatly admired [2]. Fabricius studied at the gymnasium at Altona and entered the University of Copenhagen in 1762. Later the same year he travelled together with his friend and relative Johan Zoëga to Uppsala, Sweden, where he finally succeeded to study under famous botanist Carl Linnaeus for two years as the only student from Schleswig-Holstein. On his return, he started work on his Systema entomologiæ, which was finally published in 1775. Throughout this time, he remained dependent on subsidies from his father, who worked as a consultant at Frederiks Hospital. 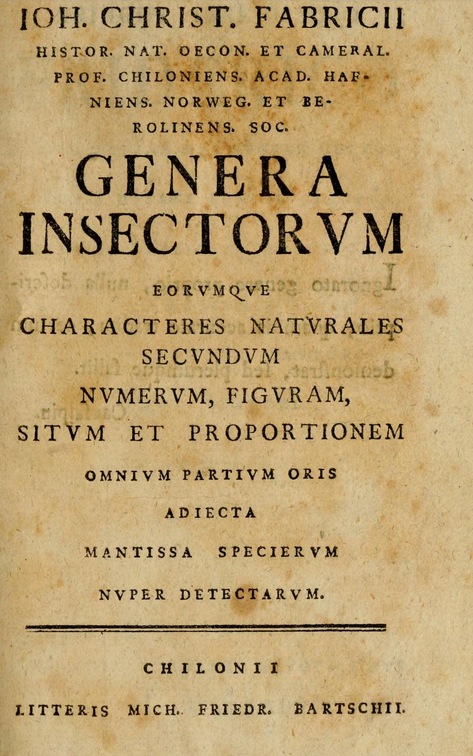 Fabricius was appointed a professor in Copenhagen in 1770, and in 1775 or 1776, the Christiania Albertina University of Kiel appointed Fabricius Professor of Natural History and Economics, promising that they would build a natural history museum and a botanical garden. Economic science had a higher biological component in the agricultural societies of the time, so that the contradiction between his inclinations and activities and his employment was less pronounced than it is today. As an economist, he published little. He felt at home in Kiel, but complained about insufficient resources and equipment. Although he tried to resign three times, on one occasion only being prevented by an appeal from his students to the Danish King and Duke of Schleswig, Christian VII, Fabricius held the position at Kiel for the rest of his life. As the library in Kiel did not have an adequate collection for his field of research, he started to travel. He gave lectures in winter and used the summer for his entomological studies.

From Kiel to London

During his time in Kiel, Fabricius repeatedly travelled to London in the summer to study the collections of British collectors, such as Joseph Banks and Dru Drury. In about 1780 he was forced by his financial situation to consider leaving Kiel and going to England, where he was also being offered better working conditions. Fabricius undertook several scientific journeys to France, England and Norway to broaden his knowledge, especially of entomology. In 1767 he came for the first time to London, where he was able to use the collections of William Hunter for first descriptions of many insects, which he published in his work Systema entomologiae. Thus, the Hunter insect collection contains about 400 holotypes, most of which were described by Fabricius. Some species, however, could be described by his friend, the French entomologist Guillaume Antoine Olivier (1756-1814), who visited London in 1789 and, on Fabricius’ recommendation, also examined the Hunters’ collections.

Towards the end of his career, Fabricius spent much of his time living in Paris, where he frequently met with naturalists such as Georges Cuvier and Pierre André Latreille but on hearing of the British attack on Copenhagen in 1807, Fabricius returned to Denmark, damaging his already fragile health [4,9]. Johan Christian Fabricius died on the 3rd of March 1808 in Kiel, Holstein, at the age of 63.

How to Categorize Insects

Fabricius, who is still a recognized entomologist throughout the world, described about 10,000 new insect species in his publications, thus becoming one of the most important systematic classifiers in the field. He saw the classification essentially as an aid to a better understanding of the workings of nature.[2] Fabricius has developed a system for the classification of insects based upon the structure of the mouth parts, rather than upon wing structures. This new system had an important influence on the later development of the science of entomology. He distinguished both artificial and natural characteristics. Artificial characteristics allow for the determination of a species, and natural ones allow for the relationship to other genera and varieties. Fabricius’ system remains the basis of insect classification today, although the names he proposed are not. Fabricius also advanced theoretical propositions that were progressive for the time, particularly his view that new varieties of species could arise through hybridization and by environmental influences on anatomical structure and function.

Less known than Fabricius’ contributions in the field of insect systematics are his evolutionistic ideas and speculations. He considered systematics to be a means to understanding important scientific functions and phenomena in general. In a frequently quoted sentence he said:

Many of his ideas concerning evolution sound amazingly modern. For instance, he considered it possible that a species could be formed through mixing existing species (i.e., some form of hybridization) and through morphological adaptation and modification. In his opinion, such phenomena caused an unbelievable wealth of forms and species of living organisms.[11]

Rick Foster – International Entomology: Changing the World, One Bug at a Time, [12]