You are here: Home › biology › Georges Cuvier and the Science of Paleontology 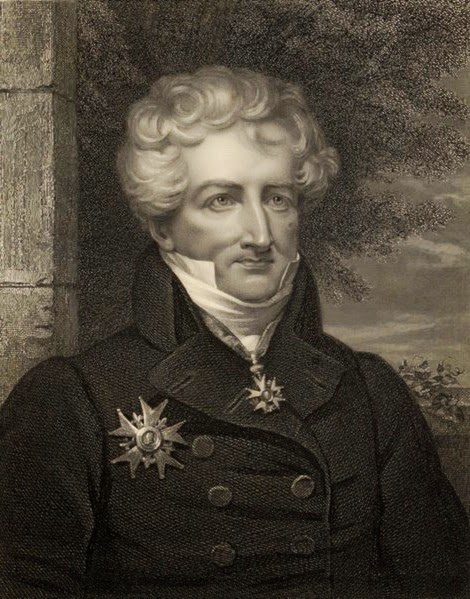 On August 23, 1769, French naturalist and zoologist Jean Léopold Nicolas Frédéric Cuvier aka Georges Cuvier was born. He was a major figure in natural sciences research in the early 19th century, and was instrumental in establishing the fields of comparative anatomy and paleontology through his work in comparing living animals with fossils.

Georges Cuvier came from a Lutheran family in the then Württemberg county of Mömpelgard. He was the son of Jean Georges Cuvier (1716-1795), a former lieutenant of a Swiss regiment, and Anne-Clémence Catherine Châtel (1736-1792). Already in his childhood he read the complete works of Georges-Louis Leclerc de Buffon and at the age of twelve he started his first natural history collection.[4] From 1784 to 1788 Cuvier studied at the Hohen Karlsschule in Stuttgart, where he mainly took courses in administrative, legal and economic sciences.  In 1787 he was appointed Chevalier (knight), which gave him access to society. After completing his studies at the Hohen Karlsschule, Cuvier was employed as a tutor by the Count d’Héricy in Normandy for eight years. In his spare time he devoted himself to natural history studies, studying plants, seabirds and marine animals. Henri-Alexandre Tessier and Étienne Geoffroy Saint-Hilaire recommended that Cuvier be appointed to the Muséum national d’histoire naturelle in Paris,[5] and in 1795 he became a member of the Société d’histoire naturelle. Hilaire, who was professor there for “Mammals, cetaceans, birds, reptiles and fish”, followed this recommendation. In the same year, Cuvier became a member of the newly founded Institut de France.

During Geoffroy’s absence due to the Egyptian campaign, Cuvier gained influence among the zoologists of the Muséum. In 1800 he became professor of zoology and in 1803 secretary of physical sciences at the Collège de France. In 1801 he was elected a foreign member of the Göttingen Academy of Sciences. On 17 April 1806 the Royal Society accepted him as a member. In 1808 he was elected a foreign member of the Bavarian Academy of Sciences. On behalf of Napoleon, he reorganised the academic institutes in Italy, the Netherlands and southern Germany and was awarded the Order of the Chevalier de la Légion d’Honneur for his services in 1811. In 1814 he was appointed Conseil d’État. In 1822 he was elected to the American Academy of Arts and Sciences. Shortly before his death he was promoted to Pair of France. 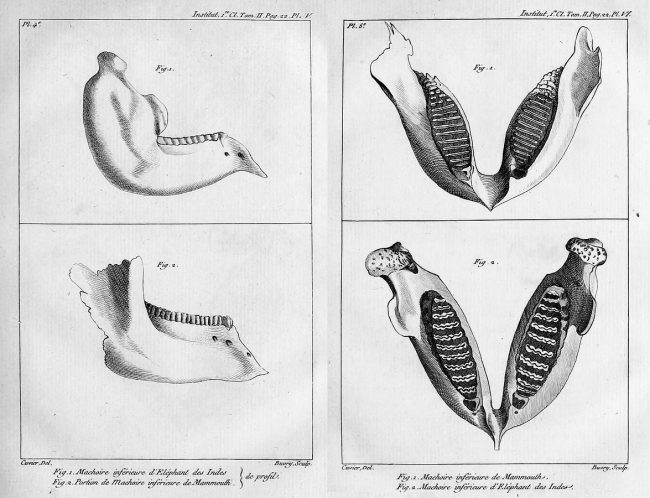 These Indian elephant and mammoth jaws were included in 1799 when Cuvier’s 1796 paper on living and fossil elephants was printed.

Classification of the Animal Kingdom

To one of Cuvier’s first independent publications belonged the Tableau élémentaire de l’histoire naturelle des animaux and depicted the foundation of his natural classification of the animal kingdom. Further major work Cuvier’s made a subject of molluscs, which he started researching on in the 1790s. Cuvier was often asked for advice considering scientific textbooks and at one point, the French Academy began preparing its first dictionary and defined “crab” as “A small red fish which walks backwards.” When Cuvier was asked to consult them, he responded:

“Your definition, gentlemen, would be perfect, only for three exceptions. The crab is not a fish, it is not red and it does not walk backwards.”

His research on fish started rather late, in the early 1800s. He managed to publish descriptions of over 5000 fish and this depicted a major work on the field for the next decades.

Georges Cuvier is regarded as the scientific founder of paleontology and made comparative anatomy a research discipline. He studied the anatomy of different living beings and systematically compared all similarities and differences. These studies enabled him to derive the shape of other bones and their muscles from the existence of some bones. Thus he finally succeeded in reconstructing an entire animal body from only a few parts. He significantly changed not only the university’s department of paleontology, but also the whole field’s view on the subject. His research results were published in several works and dealt mostly with extinct mammals, as well as fossil species of hippopotamus, extinct species of elephants and many more. The Animal Kingdom, originally named Le Règne Animal appeared first in 1817. Further volumes followed in the 1820s and early 1830s. The Animal Kingdom depicts a classical work a relates to complete research results, Cuvier accomplished during his lifetime.

Cuvier was long regarded as the best-known advocate of catastrophe (cataclysm theory), according to which large catastrophes repeatedly destroyed a large part of the living creatures in the history of the earth and new life developed from the remaining species in subsequent phases. In 1808 Cuvier, together with the French natural scientist Alexandre Brongniart, structured the geological stratification in the Paris Basin (older Cenozoic or Tertiary). They examined the fossils in the individual layers of the earth. They discovered a sequence of a total of seven fossil faunas, whereby each fauna of a certain layer in the following layer was replaced by another fauna and thus disappeared. Between each of the terrestrial fossil faunas, which followed one another, lay layers of marine molluscs, so that freshwater and seawater deposits alternated.

The Great Academic Dispute of 1830

Cuvier’s best-known scientific opponent was Geoffroy Saint-Hilaire,[5] for whom he had begun as an assistant. The 1830 Paris Academic Contest became famous, in which not only the theory of catastrophes played a role, but also the question of whether natural history followed a uniform blueprint (Saint-Hilaire) or several fundamentally different ones (Cuvier). For a long time Cuvier was regarded as backward because of Lyell‘s attacks and his rejection of the theory of a continuous evolution (gradualism),[6] but the theory of evolution was still controversially discussed among Cuvier’s scientific contemporaries. Today it is undisputed that, in addition to gradual change, catastrophic events were also decisive for the history of life – such as the Earth-spanning catastrophe around 66 million years ago at the Chalk-Palaeogene boundary, which is blamed for the mass extinction at the end of the Mesozoic.