You are here: Home › literature › Between Realism and Romanticism – Thomas Hardy 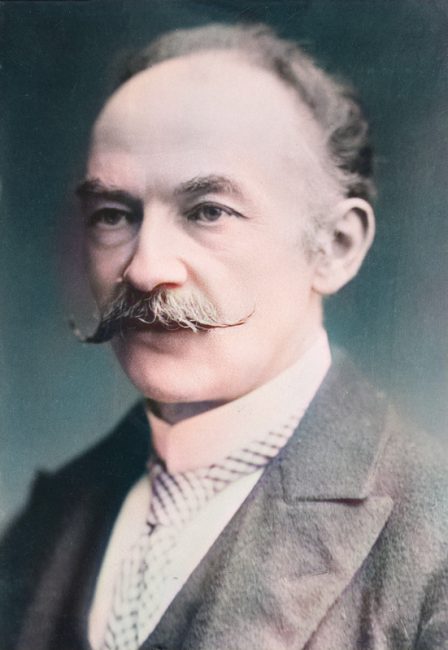 On June 2, 1840, English novelist and poet Thomas Hardy was born. A Victorian realist in the tradition of George Eliot, he was influenced both in his novels and in his poetry by Romanticism, especially William Wordsworth.[7] Charles Dickens was his other source of influence, and like Dickens he was highly critical of much in Victorian society.

“To find beauty in ugliness is the province of the poet.”
— Thomas Hardy, Statement (5 August 1888)

Thomas Hardy was born in the village of Upper Bockhampton, located in Southwestern England. His father was a stone mason and a violinist, while his mother enjoyed reading and relating all the folk songs and legends of the region. At the age of eight, Hardy began to attend Julia Martin’s school in Bockhampton. However, most of his education came from the books he found in Dorchester, the nearby town. He learned French, German, and Latin by teaching himself through these books. Because Hardy’s family lacked the means for a university education, his formal education ended at the age of sixteen, when he became apprenticed to James Hicks, a local architect. Under Hicks’ tutelage, Hardy learned much about architectural drawing and restoring old houses and churches. Hardy loved the apprenticeship because it allowed him to learn the histories of the houses and the families that lived there.

“A lover without indiscretion is no lover at all. Circumspection and devotion are a contradiction in terms.”
– Thomas Hardy, The Hand of Ethelberta (1876)

In 1862, he moved to London, where he enrolled as a student at King’s College London. He won prizes from the Royal Institute of British Architects and the Architectural Association. But Hardy never felt at home in London, because he was acutely conscious of class divisions and his social inferiority. However, during this time he became interested in social reform and the works of John Stuart Mill,[5] maybe the most influential english-speaking philosopher of the 19th century. He was also introduced by his Dorset friend Horace Moule to the works of Charles Fourier, a French philosopher credited with having originated the word feminism, and Auguste Comte, one of the founders of the discipline of sociology and of the doctrine of positivism. Five years later in 1867, concerned about his health, Hardy returned to Dorset and decided to dedicate himself to entirely writing poetry and novels, though the first part of his career was devoted to the novel.

At first he published anonymously, but when people became interested in his works, he began to use his own name. Like Dickens, Hardy’s novels were published in serial forms in magazines that were popular in both England and America. His first popular novel was Under the Greenwood Tree, published in 1872. The next great novel, Far from the Madding Crowd (1874) was so popular that with the profits, Hardy was able to give up architecture and marry Emma Gifford. Other popular novels followed in quick succession: The Return of the Native (1878), The Mayor of Casterbridge (1886), The Woodlanders (1887), Tess of the D’Urbervilles (1891), and Jude the Obscure (1895). In addition to these larger works, Hardy published three collections of short stories and five smaller novels, all moderately successful. However, despite the praise Hardy’s fiction received, many critics also found his works to be too shocking, especially Tess of the D’Urbervilles and Jude the Obscure. The outcry against Jude was so great that Hardy decided to stop writing novels and return to his first great love, poetry.

From the Victorian to the Modern Era

“Only a man harrowing clods
In a slow silent walk
With an old horse that stumbles and nods
Half asleep as they stalk.”
– Thomas Hardy, “In Time of ‘The Breaking Of Nations'” (1915)

Hardy’s long career spanned the Victorian and the modern eras. He described himself as a poet “who holds that if way to the Better there be, it exacts a full look at the Worst” and during his nearly 88 years he lived through too many upheavals — including World War I — to have become optimistic with age. Incredibly prolific, Hardy wrote fourteen novels, three volumes of short stories, and several poems between the years 1871 and 1897. From 1898 until his death in 1928 Hardy published eight volumes of poetry; about one thousand poems were published in his lifetime. Moreover, between 1903 and 1908 Hardy published The Dynasts — a huge poetic drama in 3 parts, 19 acts, and 130 scenes. Although Hardy’s novels were received badly by critics when they were first published, Hardy has been consistently recognized since his death as one of the great English novelists. He was an important influence on Modernism, and many later writers, including Virginia Woolf,[9] D.H. Lawrence, and Robert Graves, named Hardy as influences. The spectrum of Hardy’s works ranges from the realistic and detailed depiction of country life to the depiction of the unexpected, extraordinary, suspicious, from the tragic to the humorous. He tries to avoid sentimentality. He often makes use of the sound of oral narration, for example in A Tradition of Eighteen Hundred and Four (in Wessex Tales).

At yovisto you can learn more about the poetry ofThomas Hardy in the lecture of Prof Langdon Hammer from Yale University on ‘World War I Poetry in England‘.