You are here: Home › literature › Virginia Woolf and the Birth of Modern Literature 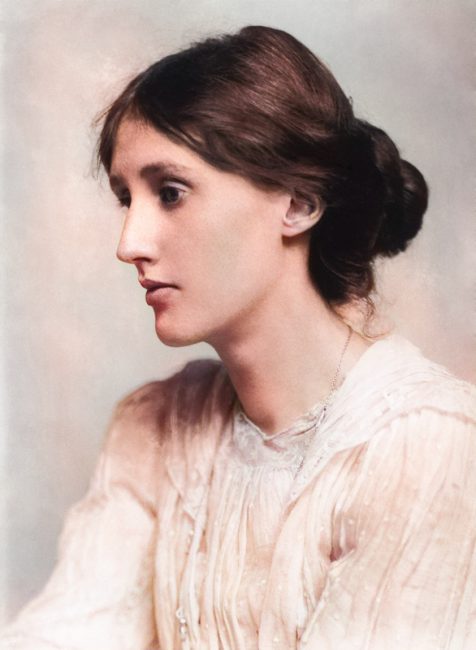 On January 25, 1882, English writer Virginia Woolf was born. She is considered one of the foremost modernists of the twentieth century. Her most famous works include the novels Mrs Dalloway (1925), To the Lighthouse (1927) and Orlando (1928).

“The beauty of the world which is so soon to perish, has two edges, one of laughter, one of anguish, cutting the heart asunder.”
— Virginia Woolf, A Room of One’s Own (1929)

To make a Difference

Have you ever read some text authored by Virginia Woolf? If so, for sure you will remember, because her writing differs from many others. Virginia Woolf is an author of modernism and she uses modernistic techniques in her writings. In difference to classical novels, you are able to follow the protagonists ‘stream of conscious‘, i.e. you follow the flow of his or her thoughts. And this some times is more strenuous than you might think, because you soon will loose any sense of time and it might get difficult to follow the course of action in the ‘real world’ of the novel anymore. But, let’s take a look on Virginia Woolf‘s life and her work.

Virginia Woolf was born Adeline Virginia Stephen into a privileged household to Sir Leslie Stephen, a notable historian, author, critic and mountaineer, and Julia Prinsep Duckworth (née Jackson). Leslie Stephen was a founding editor of the Dictionary of National Biography, a work which would influence Woolf‘s later experimental biographies. Her parents had each been married previously and been widowed, and, consequently, the household contained the children of three marriages. Woolf had three full siblings and four half-siblings.

Two of Woolf’s brothers had been educated at Cambridge, but all the girls were taught at home. Moreover, Woolf’s parents were extremely well connected, both socially and artistically. Her father was a friend to William Thackeray and George Henry Lewes, as well as many other noted thinkers. Her mother’s aunt was the famous 19th century photographer Julia Margaret Cameron. For these reasons and more, Virginia Woolf was ideally situated to appreciate and experiment with the art of writing. As a young girl, Virginia was light-hearted and playful. She started a family newspaper, the Hyde Park Gate News, to document her family’s humorous anecdotes. However, she had been traumatized at the age of six when her half-brothers George and Gerald Duckworth sexually abused her. When her mother suddenly died, Virginia Woolf at age only 13 spun into a nervous breakdown, only made worse when two years later, her half-sister Stella also died.

Virginia Woolf was to have many other breakdowns throughout the course of her life. She nevertheless managed to study at the Ladies Department of the King’s College London. Her four years of study introduced her to a handful of radical feminists at the helm of educational reforms. Virginia Woolf became acquainted with the intellectual circle of artists and writers that formed the Bloomsbury Group, a group that became known in 1910 with Dreadnought Hoax, a work that Woolf participated in using a male pen name. In the Bloomsbury group she met Leonard Woolf and they married in 1912, despite his poverty. The Bloomsbury Group had a liberal approach to sexuality and Virginia Woolf started a relationship with Vita Sackville-West, the wife of writer Harold Nicolson. They remained good friend till Woolf‘s death and for her she wrote Orlando, a literary love letter.

Her professional literary career began in 1910 working for the Times Literary Supplement releasing her first novel, The Voyage Out, in 1915. In 1925 she released Mrs Dalloway, the story of Clarissa Dalloway, a society woman preparing a party that she will host. The story is set in England, just after World War I. The narrative travels back and forth in time as well as in and out of each character‘s minds, constructing a unique perspective on post-war English society. The style has at times been compared to James Joyce‘s Ulysses,[7] even if Virginia Woolf denied a direct connection. After Orlando (1928) in 1929 Woolf published her best known non-fiction work A Room of One’s Own where she famously wrote “A woman must have money and a room of her own if she is to write fiction.” The book came out of a series of lectures Woolf gave in different colleges and Universities throughout the year of 1928. The work develops around the themes of women‘s access to education, a history of female writers and female novel characters, and lesbianism.

“Lock up your libraries if you like; but there is no gate, no lock, no bolt that you can set upon the freedom of my mind.”
— Virginia Woolf, A Room of One’s Own (1929)

After completing her last novel Between the Acts (1941), and enhanced by the ongoing war, Virginia Woolf fell into deep depression which ended with her suicide on the 28th of March, 1941. The body was found 20 days later.