You are here: Home › literature › Charles Dickens – Famous Writer and Critic of the Victorian Era 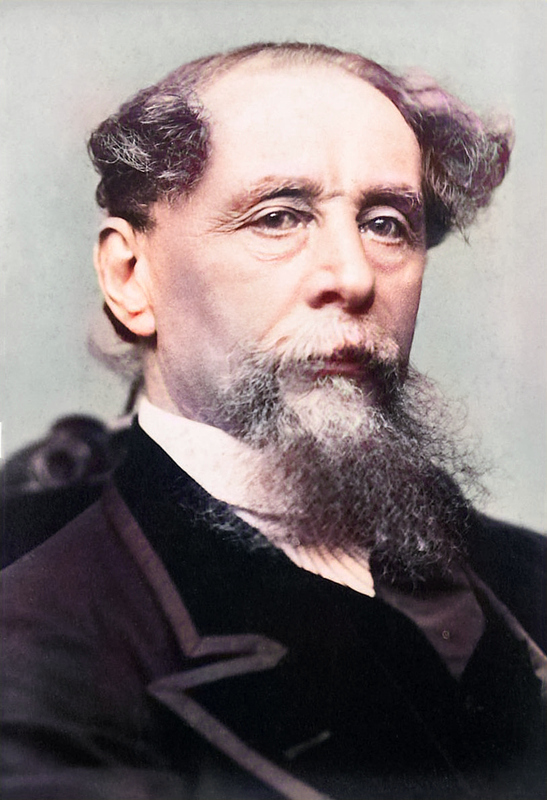 On February 7, 1812, the English writer and social critic known as one of the greatest novelists of the Victorian period, Charles Dickens was born.

Do you love Dickens?

Either you love Dickens or you may find him untolerably boring or slushy. What I personally love about Dickens is his creative genius when it comes to invent whimsical characters. If you have ever read ‘Oliver Twist‘, for sure you will remember Mr. Bumble. Or think of Scrooge from ‘A Christmas Carol’. And moreover, he even left us with an unsolvable secret. His last novel ‘The Mystery of Edwin Drood‘ was supposed to become a crime story, which unfortunately was only half written, when he died. For a crime novel this means, the author leaves us with no trace (or even too many clues) of what might be the solution of the mystery. For more than a century literary scholars and fans have argued about possible solutions of the plot.

Charles Dickens’ childhood is referred to as happy and quite idyllic, spending a lot of time in the nature and with the literary works of Tobias Smollett or Henry Fielding.[1] He was able to receive public schooling at least for some years and was known to have a photographic memory, an advantage for his later writing activities. When his father went to prison, Dickens moved in with a kind agent for the ‘Insolvent Court’, still visiting his father often, which caused a major influence also in his writings. Furthermore, his time at the warehouse he began working at, depicted an incisive period to Dickens’ life, which was notable in his economical and political essays as well as in his novels.

The Active and Curious Journalist

The happy days of Charles Dickens paused for a while until beginning his career as an active and curious journalist. His journalism, in the form of sketches in periodicals, formed his first collection of pieces, published in 1836: Sketches by Boz – Boz being a family nickname he employed as a pseudonym for some years. The success of Sketches by Boz led to a proposal from publishers Chapman and Hall for Dickens to supply text to match Robert Seymour’s engraved illustrations in a monthly letterpress. Seymour committed suicide after the second instalment, and Dickens, who wanted to write a connected series of sketches, hired “Phiz” to provide the engravings for the story. The resulting story became The Pickwick Papers, and though the first few episodes were not successful, the introduction of the Cockney character Sam Weller in the fourth episode (the first to be illustrated by Phiz) marked a sharp climb in its popularity. The final instalment sold 40,000 copies.

Until 1836, he was occupied with several jobs before beginning as an editor of “Bentley’s Miscellany” and in the same year, his active work on “Oliver Twist” started. He was known to be a diligent writer, producing about 90 pages a month next to his job at the magazine. When the novel was published two years later, it became very successful, due to its unusual dialogue style and the fact that he produced the very first Victorian novel with a child protagonist. His success as a novelist continued. The young Queen Victoria read both Oliver Twist and Pickwick, staying up until midnight to discuss them.

Even though Dickens had to suffer from deep sadness after his relative Marry passed away in 1837 and all his deadlines had to be delayed, his published works experienced a great success. In this period, “Master Humphrey’s Clock“, “Barnaby Rudge: A Tale of the Riots of ‘Eighty“, and “The Old Curiosity Shop” were all published in monthly instalments before being made into books.

A Sledge Hammer Blow for the Poor

A longer trip to the United States inspired the author for another famous work, “A Christmas Carol“, which he wrote in 1843. The seeds for the story became planted in Dickens’s mind during a trip to Manchester to witness the conditions of the manufacturing workers there. This, along with scenes he had recently witnessed at the Field Lane Ragged School, caused Dickens to resolve to “strike a sledge hammer blow” for the poor. As the idea for the story took shape and the writing began in earnest, Dickens became engrossed in the book. He later wrote that as the tale unfolded he “wept and laughed, and wept again” as he “walked about the black streets of London fifteen or twenty miles many a night when all sober folks had gone to bed.” 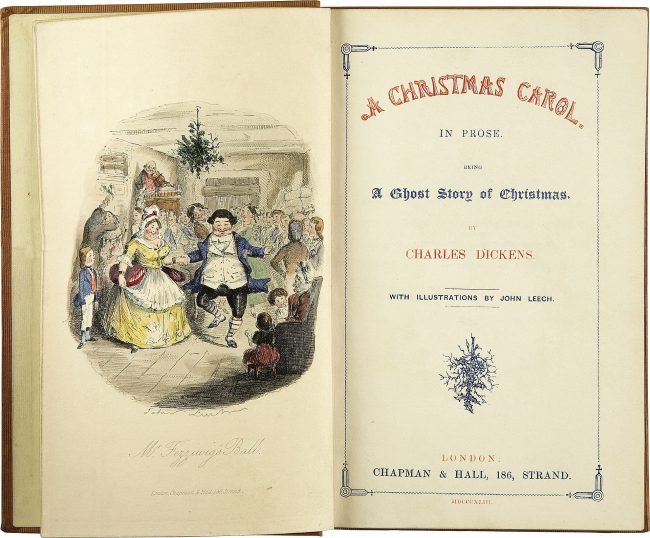 Title page of the first edition of A Christmas Carol, 1843

Dickens became known as a philanthrope and raised a great amount of money for hospitals or educational institutions with money he saved from lectures he gave. Major literary works of this period were “A Tale of Two Cities“, “Great Expectations“, or “Household Wars“. During his American visit, Dickens spent a month in New York City, giving lectures, raising the question of international copyright laws and the pirating of his work in America. He persuaded a group of twenty-five writers, headed by Washington Irving, to sign a petition for him to take to Congress, but the press were generally hostile to this, saying that he should be grateful for his popularity and that it was mercenary to complain about his work being pirated. 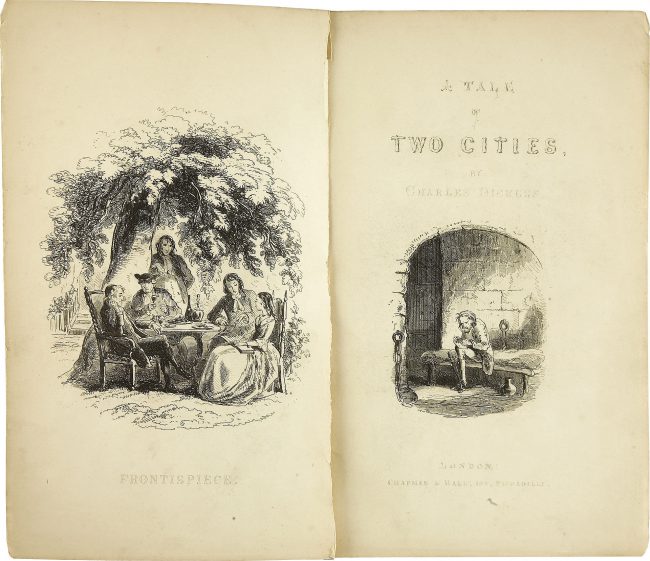 Title page of the first edition of A Tale of Two Cities, 1859

After living briefly in Italy  during 1844, Dickens travelled to Switzerland in  1846, where he began work on Dombey and Son (1846–48). This and David Copperfield  mark a significant artistic break in Dickens’s career as his novels became more serious in theme and more carefully planned than his early works. The later was published between 1849 and 1850. Scholars consider it as Dickens’s veiled autobiography with the title character modeled after the author himself. It was Dickens’s personal favourite among his own novels. In late November 1851, Dickens moved into Tavistock House where he wrote Bleak House (1852–53), Hard Times (1854), and Little Dorrit (1856). During this period he worked closely with the novelist and playwright Wilkie Collins. In 1856, his income from writing allowed him to buy Gad’s Hill Place in Higham, Kent. As a child, Dickens had walked past the house and dreamed of living in it.

After separating from his wife Catherine, Dickens undertook a series of hugely popular and remunerative reading tours which, together with his journalism, were to absorb most of his creative energies for the next decade, in which he was to write only two more novels. His first reading tour, lasting from April 1858 to February 1859, consisted of 129 appearances in 49 different towns throughout England, Scotland and Ireland.

On 9 June 1865, while returning from Paris with his mistress, the actress Ellen Ternan, Dickens was involved in the Staplehurst rail crash. The train’s first seven carriages plunged off a cast iron bridge that was under repair. The only first-class carriage to remain on the track was the one in which Dickens was travelling.

During another trip to the United States, shortly after the end of the American Civil war, Dickens’ health situation started to worsen and he gave some final readings and lectures. The last novel he worked on was “The Mystery of Edwin Drood“, never to be finished. On 8 June 1870, Dickens suffered another stroke at his home after a full day’s work on Edwin Drood. He never regained consciousness, and the next day, five years to the day after the Staplehurst rail crash, he died at Gads Hill Place. 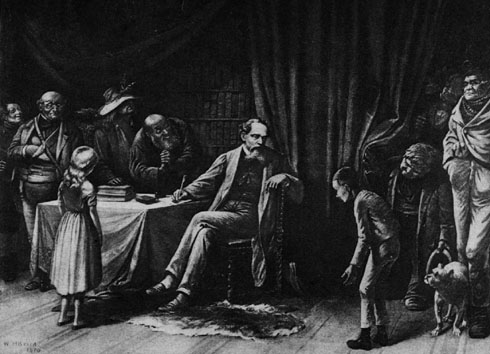 Dickens with his characters, drawing by William Holbrook Beard

Dickens was known for his satirical and humorous style of writing and his creative way of developing characters for his works. Many of Dickens’ fantastic names made their way into the British culture up to this day and some even created new words for things that reminded them of Dickens’ characters. Some of his writings are also known to be very autobiographical, such as “David Copperfield” or “Bleak House“. Even though Dickens depicted one if the most important writers of the Victorian era, he often criticized its social systems, which he worked up in his writings. The detailed description of the society’s actual problem with poverty and crime was unusual and therefore quite shocking to most readers.

Dickens’ works became so famous that even today, TV shows are produced leaning on his masterpieces and his books are still sold at large amounts. To other writers, Charles Dickens triggered various feelings. While Oscar Wilde [2] often criticized his characters, George Orwell [3] and Leo Tolstoy highly admired him for the realism, still humorous and sophisticated literature. Even Karl Marx [4] was a well known fan of Dickens, enjoying that Dickens “issued to the world more political and social truths than have been uttered by all the professional politicians, publicists and moralists put together.“