You are here: Home › literature › William Wordsworth and the Romantic Age of English Literature 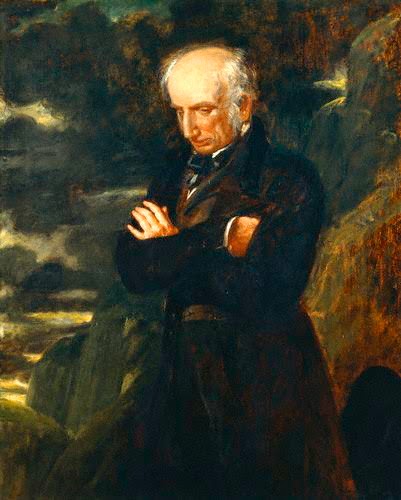 The eye — it cannot choose but see;
we cannot bid the ear be still;
our bodies feel, where’er they be,
against or with our will.
– William Wordsworth, Expostulation and Reply, st. 5 (1798).

William Wordsworth was born at Cockermouth in Cumberland, the second of five children of John Wordsworth, who worked as an agent and rent collector for Sir James Lowther. Wordsworth’s father, although frequently away from home on business, encouraged him in his reading, and in particular set him to commit to memory large portions of poetry, including that of Milton, Shakespeare and Spenser; in addition William was allowed to use his father’s library. Wordsworth’s mother died in 1778, when he was sent as a boarder to Hawkshead Grammar School. Soonafter, his father died in 1783, at which time Sir James owed him some £4000, but he refused to honour the debt. Responsibility for William and his brothers passed to his mother’s brother, Christopher Cookson, an unhappy arrangement for the children, who found their guardian unsympathetic. In 1787, Wordsworth attended St John’s College, Cambridge, when he visited France at that time in the midst of revolutionary turmoil. His enthusiasm for the French Revolution took him to France again in 1791, where he had an affair with Annette Vallon, who bore him an illegitimate daughter, Caroline, in 1792. Having run out of money, Wordsworth returned to England the following year, and the Anglo-French war, following the Reign of Terror, prevented his return for nine years. However, he increasingly distanced himself from the aims of the revolution. His turning away turned into opposition in 1798, when French troops conquered Switzerland, which Wordsworth valued, and Wordsworth became known for conservatism.

“I have said that poetry is the spontaneous overflow of powerful feelings: it takes its origin from emotion recollected in tranquility.”
– William Wordsworth, Lyrical Ballads (1798-1800), Preface.

In 1793, Wordsworth was able to publish his first collection of poems, An Evening Walk and Descriptive Sketches. One year later, he was reunited with his sister Dorothy, who became his companion, close friend, moral support, and housekeeper until her physical and mental decline in the 1830s. In 1795, Wordsworth received a legacy from a close relative and he and his sister Dorothy went to live in Dorset. It was there that Wordworth met Samuel Tailor Coleridge, who was an admirer of Wordsworth’s work, and the three of them grew very close, the two men meeting daily to talk about poetry and to plan Lyrical Ballads, which came out in 1798. This collection of poems, mostly by Wordsworth but with Coleridge contributing ‘The Rime of the Ancient Mariner‘, is generally taken to mark the beginning of the Romantic movement in English poetry. The poems were greeted with hostility by most critics. In the same year they made a trip to Germany together with Wordsworth’s sister Dorothy. In Goslar, Wordsworth began working on his autobiographical poem, which later became known as The Prelude. 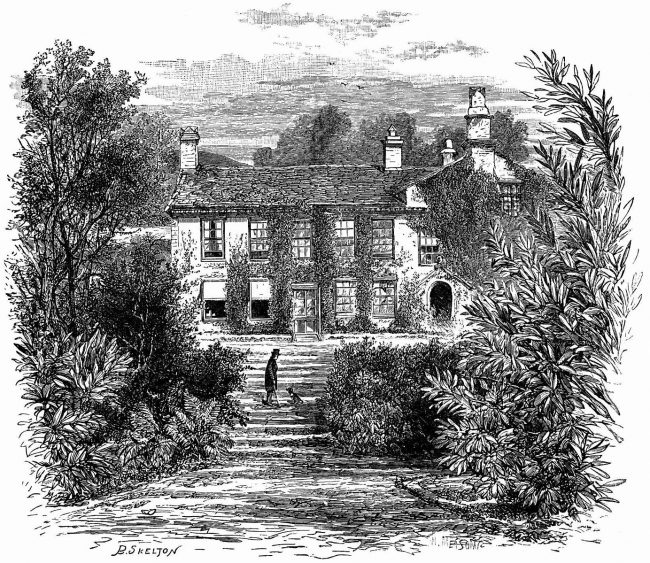 I Wandered Lonely as a Cloud

The three friends travelled to Germany in fall 1799, a trip that produced intellectual stimulation for Coleridge and homesickness for Wordsworth. After their return, William and Dorothy settled in his beloved Lake district, at Dove Cottage near Grasmere. Coleridge lived nearby with his family. Wordsworth’s most famous poem, ‘I Wandered Lonely as a Cloud‘ was written at Dove Cottage in 1804. Two year earlier in 1802, Wordsworth had married a childhood friend, Mary Hutchinson. The next few years were personally difficult for Wordsworth. Two of his children died, his brother was drowned at sea and Dorothy suffered a mental breakdown. His political views underwent a transformation around the turn of the century, and he became increasingly conservative, disillusioned by events in France culminating in Napoleon Bonaparte‘s wars.

True beauty dwells in deep retreats,
Whose veil is unremoved
Till heart with heart in concord beats,
And the lover is beloved.
William Wordsworth, To ____ . (Let other Bards of Angels sing), st. 3 (1824).

Wordsworth’s literary career had began with Descriptive Sketches (1793) and reached an early climax before the turn of the century, with Lyrical Ballads. His powers peaked with Poems in Two Volumes (1807), and his reputation continued to grow; even his harshest reviewers recognized his popularity and the originality. Wordsworth’s literary credits also include Tintern Abbey, and his poetry is perhaps most original in its vision of the relation between man and the natural world — a vision that culminated in the metaphor of nature as emblematic of the mind of God. Together with Coleridge, Keats and Shelley, Wordsworth helped create a much more spontaneous and emotional poetry. It sought to depict the beauty of nature and the quintessential depth of human emotion. In 1842, he was given a government pension and in q843 Wordsworth was awarded the honorary title Poet Laureate. Wordsworth died on 23 April 1850 at age 80 from an aggravated case of pleurisy and was buried in Grasmere churchyard. A few months after his death, Wordsworth’s widow Mary published his long autobiographical Poem to Coleridge as The Prelude. The work aroused little interest at the time, but is now regarded as Wordsworth’s masterpiece.

James Chandler, A Revolution in Poetry: Wordsworth and Coleridge, 1798, [11]