You are here: Home › philosophy › Liberty vs. Authority according to John Stuart Mill 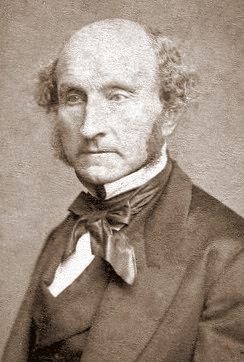 On May 8, 1873, British philosopher, political economist and civil servant John Stuart Mill passed away. One of the most influential thinkers in the history of liberalism, he contributed widely to social theory, political theory and political economy. Dubbed “the most influential English-speaking philosopher of the nineteenth century“, Mill‘s conception of liberty justified the freedom of the individual in opposition to unlimited state and social control. His views still are significant today and are generally recognized to be among the deepest and certainly the most effective defenses of empiricism and of a liberal political view of society and culture. His overall aim was to develop a positive view of the universe and the place of humans in it, one which contributes to the progress of human knowledge, individual freedom and human well-being. In his general views he was deeply influenced by John Locke, George Berkeley, David Hume, as well as of Jeremy Bentham‘s utilitarianism.[4,5,6,7]

“A man who has nothing which he is willing to fight for, nothing which he cares more about than he does about his personal safety, is a miserable creature who has no chance of being free, unless made and kept so by the exertions of better men than himself.”
–John Stuart Mill, Dissertations and Discussions, vol.1 p. 26

It is believed that already by the age of eight, John Stuart Mill studied Latin, algebra and history and he was appointed schoolmaster to the younger children of the family. By the age of ten, he probably read Plato and Demosthenes, he also began studying and composing poetry and read about natural sciences. Soon, he was introduced to the studied of Adam Smith and David Ricardo. During a stay in France, Mill attended the winter courses on chemistry, zoology, logic of the Faculté des Sciences in Montpellier, and took a course in higher mathematics. During the early 1840s Mill started a pen-friendship with Auguste Comte and his views on sociology and philosophy significantly influenced Mill’s thoughts and writings.

Since John Stuart Mill was not eligible to study at the University of Oxford or the University of Cambridge he followed his father to work for the East India Company as a colonial administrator. He further attended University College, London, to hear the lectures of John Austin, the first Professor of Jurisprudence. During his career at the East India Company, Mill was promoted to the position of Examiner of Indian Correspondence. In his work “On Liberty“, Mill defended British imperialism by arguing that a fundamental distinction existed between civilized and barbarous peoples. He viewed viewed countries such as India and China as having once been progressive, but that were now stagnant and barbarous, thus legitimizing British rule as benevolent despotism, “provided the end is [the barbarians’] improvement.” Eventually, the crown proposed to take direct control over the colonies in India and Mill was tasked with defending Company rule, penning Memorandum on the Improvements in the Administration of India during the Last Thirty Years among other petitions. He was offered a seat on the Council of India which he declined due to his disapproval is the new system of rule.

“Whatever we may think or affect to think of the present age, we cannot get out of it; we must suffer with its sufferings, and enjoy with its enjoyments; we must share in its lot, and, to be either useful or at ease, we must even partake its character.”
— John Stuart Mill, The Spirit of the Age, I, Examiner (9 January 1831), p. 20

For John Stuart Mill, freedom is the “first and strongest desire of human nature” and it is only through it that the individual is able to fully develop his abilities, his mind and his morals. Accordingly, all governmental and social action must be directed towards granting the individual free development, while his freedom, as Mill formulates it in a principle known as the “principle of freedom,” may be limited under one condition: to protect himself or another person. On the other hand, interventions by the state or society aimed at forcing the individual to behave in a way that they consider to be better or smarter or to make the individual happier are, according to Mill, unlawful and must be avoided in all circumstances. For “about himself, about his own body and spirit” each individual is a sovereign ruler. This “very simple principle” requires, as Mill himself points out, some additions and limitations. On the one hand, the sentence was to be applied only to “mature” persons, both children and mentally ill persons were excluded from it, on the other hand, one could not assume even in a backward society (a barbarism) that it could develop itself, with which a despotism here was a legitimate form of government.

During the 1860s, Mill was occupied as Lord Rector of the University of St. Andrews and as a Member of Parliament for City and Westminster. In 1866, Mill became the first person in the history of Parliament to call for women to be given the right to vote, defending this position in subsequent debate. He further called for several reforms of Parliament and voting, especially proportional representation, the single transferable vote, and the extension of suffrage. Mill also favored the  retention of capital punishment for such crimes as aggravated murder; he termed its abolition “an effeminacy in the general mind of the country.”