You are here: Home › medical science › Niels Finsen – From Sun-Worship to Phototherapy 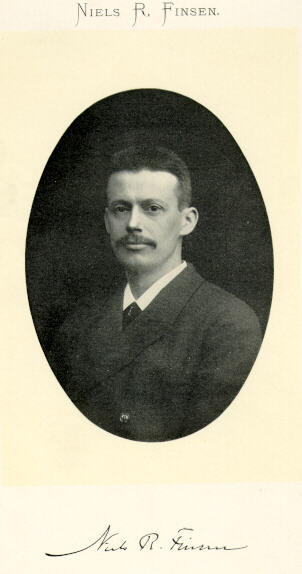 On December 15, 1860, Faroese-Danish physician and Nobel Laureate of Icelandic descent Niels Ryberg Finsen was born. Finsen is best known for his theory of phototherapy, in which certain wavelengths of light can have beneficial medical effects. Up to now, we have only mentioned Iceland in this blog when we reported on Nordic expeditions or Eskimology [1,2]. But, Iceland also has a famous Nobel Laureate in medical science, who will be subject of today’s post.

Niels Finsen was born in Tórshavn, Faroe Islands, as the second-oldest of four children to Hannes Steingrim Finsen, who belonged to an Icelandic family with traditions reaching back to the 10th century, and Johanne Fröman. The Faroe Islands are an archipelago between the Norwegian Sea and the North Atlantic Ocean, approximately halfway between Norway and Iceland. The family originally moved to Tórshavn from Iceland in 1858 when his father was given the position of Landfoged of the Faroe Islands – a collector of the revenue for the whole country and the head of the Police. Unfortunately, Niels‘ mother died when Niels was only four years old and his father married his mother‘s cousin, with whom he had six children. In 1871, Finsen‘s father was made Amtmand of the Faroe Islands.

In 1874, Finsen was sent to the Danish boarding school Herlufsholm, where his older brother Olaf was also a student. Unlike Olaf, Niels had a difficult stay at Herlufsholm, culminating with a statement from the principal which claimed Niels was “a boy of good heart but low skills and energy”. As a consequence of his low grades, he was enrolled in his father’s old school, Lærði skólinn, in Reykjavík in 1876. While studying there, his grades improved greatly, despite the fact that initially he did not know how to speak the language.

In 1882 Finsen went to Copenhagen to study medicine, taking his final examination in 1890. The same year he also became prosector of anatomy at the University of Copenhagen, a post he left in 1893 in order to be able to devote more time to his scientific work. He still went on with private tutoring of medical students, thus gaining a very moderate income for his living.[3]

Already from 1883 and probably several years earlier he suffered from an illness which turned out to be Niemann-Pick’s disease and is characterized by progressive thickening of the connective tissue of certain membranes in the liver, the heart and the spleen. This results in impairment of the functions of these organs. As time went on, symptoms of heart trouble developed in addition to the general weakness and ascites, so that Finsen became more and more of an invalid. His last years had to be spent in a wheel-chair and his ascites had to be tapped no less than 18 times – often as much as 6 litres of fluid were withdrawn. That he in spite of this was able to make his remarkable contributions to medicine tells of a strong will and great energy.[3] On the other hand, his suffering from Niemann-Pick disease also inspired him to sunbathe and investigate the effects of light on living things.

From Sun-Worship to Phototherapy

By the time, physicists had found that light and heat occupy portions of the electromagnetic spectrum, while in the everyday world around, an increasingly urbanized public had come to believe in the health-giving properties of sunlight, fresh air, and the outdoors. Finsen meant to rationalize modern sun-worship by joining science with anecdote. He set out to find wavelengths that would best heal the affected skin.[4] In 1893 Finsen found that lengthy exposure of smallpox sufferers to the red light formed by exclusion of the violet end of the spectrum prevents the suppuration of the pustules, or formation of characteristic pockmarks. Aware of the bacteria-destroying effects of sunlight, he developed an ultraviolet treatment for lupus vulgaris, a form of skin tuberculosis, which met with great success. Although phototherapy has largely been superseded by other forms of radiation and drug therapy, Finsen’s work did much to encourage the radiation therapy then being developed and led to the use of ultraviolet sterilization techniques in bacteriological research.[5] In 1895 Finsen applied this finding to the treatment of lupus vulgaris, an intractable and highly disfiguring form of tuberculosis of the skin. He employed for this purpose a powerful source of light from a carbon arc, filtered through a quartz prism, whereby the diseased tissues were exposed to high concentrations of the “incitant,” or ultraviolet, rays.[6]

Despite his rapid decline, Finsen labored with formidable vigor and won the Nobel Prize in Physiology in 1903 for his work on phototherapy. He was the first Scandinavian to win the prize and is the only Faroese Nobel Laureate to date. Niels Finsen died in Copenhagen on September 24, 1904.