You are here: Home › anthropology › Knud Rasmussen – the Father of Eskimonology 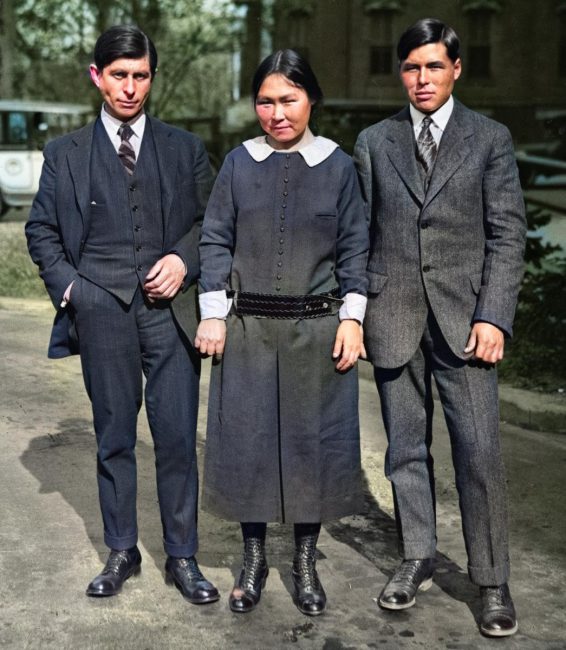 On June 7, 1879, Danish polar explorer and anthropologist Knud Johan Victor Rasmussen was born. He has been called the “father of Eskimology” and was the first European to cross the Northwest Passage by dog sled. He remains well known in Greenland, Denmark and among Canadian Inuit.

Rasmussen was born in Ilulissat, Greenland, as one of three children of a Danish missionary, the vicar Christian Rasmussen, who had been in Greenland 28 years, and an Inuit-Danish mother, Lovise Rasmussen. Partly of Eskimo descent himself, Rasmussen spent his youth in Greenland among the Kalaallit (Inuit) where he learned from an early age to speak the native language (Kalaallisut), hunt, drive dog sleds and live in harsh Arctic conditions. He was later educated in Lynge, North Zealand, Denmark, and hoped to become a writer [2]. Between 1898 and 1900 he pursued an unsuccessful career as an actor and opera singer.

In 1900, Rasmussen went as a correspondent for the Christian Daily first on a trip to Iceland and a year later he took a voyage to Swedish Lapland to gather material for literary works. He took part in Mylius-Erichsen’s sledge journey to the Yap York district of west Greenland from 1902 to 1904, also known as The Danish Literary Expedition. During the expedition, Rasmussen became interested in the ethnology of the northern non-Christian Eskimos. After returning home he went on a lecture circuit and wrote The People of the Polar North (1908), a combination travel journal and scholarly account of Inuit folklore.

Travelling Across the Ice of Greenland

In 1910, Rasmussen and friend Peter Freuchen established a trading station at Cape York, North Star Bay, among the northern Greenland Eskimos, and named it Thule, the classical word for the northernmost inhabited land, literally the “Ultima Thule“. In 1912, with Peter Freuchen and two Eskimos, Rasmussen crossed the inland ice of Greenland from the Clements Markham Glacier at the mouth of Inglefield Gulf on the west coast to Denmark Fjord on the east coast in what he called the first Thule expedition. The goal of the expedition was to investigate whether or not a water channel divided Peary Land from Greenland. After traveling over 1,000 kilometers across the ice, they conclusively proved that the water channel did not exist. The Thule Trading Station should became the home base for a series of overall seven expeditions between 1912 and 1933.

In the Second Thule Expedition from 1916-1918 with a team of seven men, Rasmussen set out to map a little-known area of Greenland’s north coast, which he later documented in his account Greenland by the Polar Sea (1921). The trip was beset with two fatalities, the only in Rasmussen’s career. The Third Thule Expedition in 1919 was to deposit food and vital supplies for Roald Amundsen, another polar explorer, for Amundsen’s polar drift in Maud. The Fourth Thule Expedition from 1919 to 1920 was in east Greenland where Rasmussen spent several months collecting ethnographic data near Angmagssalik.

But, Rasmussen’s most important journey was the massive Fifth Thule Expedition from 1921 to 1924, which was designed to find a solution the great primary problem of the origin of the Eskimo race, and during which he planned to visit every Eskimo tribe from Greenland to the Bering Strait. A ten volume account entitled The Fifth Thule Expedition 1921-1924 (1946) of ethnographic, archaeological and biological data was collected, and many artifacts are still on display in museums in Denmark. The team of seven first went to eastern Arctic Canada where they began collecting specimens, taking interviews and excavations. Rasmussen left the team and traveled for 16 months with two Inuit hunters by dog sled across North America to Nome, Alaska. Along the way he traced Eskimo migration routes and observed the basic unity of Eskimo cultures. From Alaska, he tried to continue to Russia but his visa was refused. He was the first European to cross the Northwest Passage via dog sled. His journey is recounted in Across Arctic America (1927), considered today a classic of polar expedition literature.

On subsequent expeditions from Thule, Rasmussen made cartographic, archaeological, and ethnographical studies in southeastern Greenland. The Seventh Thule Expedition in 1933 was meant to continue Rasmussen’s work, but he contracted pneumonia, dying a few weeks later in Copenhagen at the age of 54.[1] Although never formally educated, Rasmussen’s contributions to anthropology and polar exploration are recognized by academic authorities worldwide.[2]

New Light on the Friendship Between Rockwell Kent and Knud Rasmussen, [9]