You are here: Home › explorer › The Northern Expeditions of Fridtjof Nansen 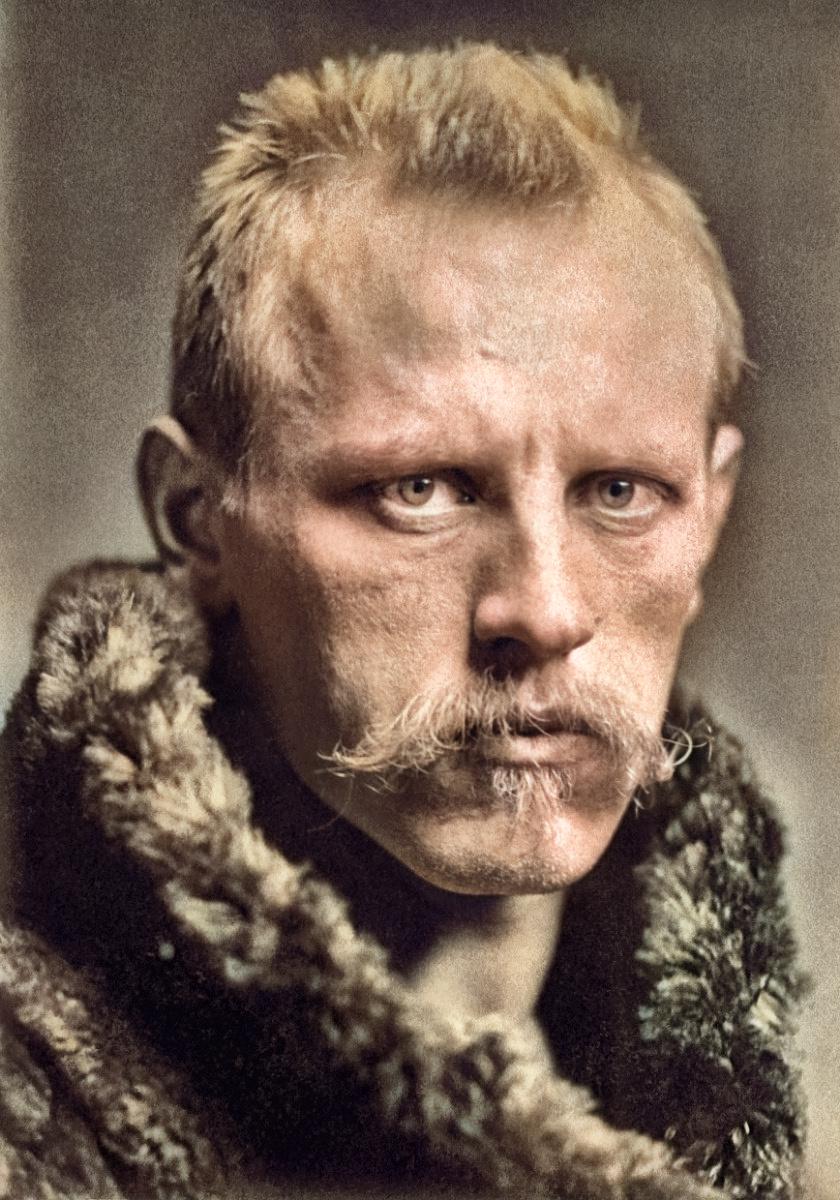 On October 10, 1861, Norwegian explorer, scientist, diplomat, humanitarian and Nobel Peace Prize laureate Fridtjof Nansen was born. Nansen led the team that made the first crossing of the Greenland interior in 1888, cross-country skiing on the island, and won international fame after reaching a record northern latitude of 86°14′ during his North Pole expedition of 1893–96. Although he retired from exploration after his return to Norway, his techniques of polar travel and his innovations in equipment and clothing influenced a generation of subsequent Arctic and Antarctic expeditions.

“The history of the human race is a continual struggle from darkness towards light. It is, therefore, to no purpose to discuss the use of knowledge; man wants to know, and when he ceases to do so, he is no longer man.”
– Nansen, Fridtjof (August 1891). “A New Route to the North Pole”. The Forum 11: 693–709.

Fridtjof Nansen’s father was a lawyer and Reporter to the Supreme Court of Norway. Fridtjof’s youth was mainly shaped by the rural surroundings as he often went swimming as well as fishing. It is believed that he spent much of his winter time skiing, which he started at the age of 2. It is also reported that Nansen used to live in the woods “like Robinson Crusoe” for weeks at a time while still a schoolboy. He also broke the world one mile skating record and won a national cross-country skiing championship, a feat he would repeat on 11 subsequent occasions.

Sea Ice forms on the Surface of the Water

Fridtjof Nansen passed his university entrance exam in 1880 and decided to study zoology at the Royal Frederick University in Christiania. Already two years later, Professor Robert Collett of the university’s zoology department proposed that Nansen take a sea voyage, to study Arctic zoology at first hand. Nansen was enthusiastic, and made arrangements through a recent acquaintance, Captain Axel Krefting, commander of the sealer Viking. During the five months voyage, Nansen found out that, contrary to previous assumption, sea ice forms on the surface of the water rather than below. while Viking became trapped in the ice close to an unexplored section of the Greenland coast, Nansen developed the idea that the Greenland icecap might be explored, or even crossed.

After the expedition, Nansen did not resume his formal studies at the university and started at Bergen Museum working and studying with leading figures such as Gerhard Armauer Hansen, the discoverer of the leprosy bacillus, and Daniel Cornelius Danielssen, the museum’s director who had turned it from a backwater collection into a centre of scientific research and education.

The Crossing of Greenland

The idea of an expedition across the Greenland icecap grew in Nansen’s mind throughout his Bergen years. In 1887, after the submission of his doctoral thesis, he finally began organising this project. Before then, the two most significant penetrations of the Greenland interior had been those of Adolf Erik Nordenskiöld in 1883, and Robert Peary [9] in 1886. Both had set out from Disko Bay on the western coast, and had travelled about 160 kilometres eastward before turning back. Nansen however proposed to travel from east to west. He also planned his expedition for a small party of six, avoiding the complex organisation for a heavy manpower. The Norwegian government refused to provide financial support for the expedition as they believed a risky adventure like this should not be encouraged. Austin Gamél, a Danish businessman ended up financing most of the trip.

On 3 June 1888 Nansen’s party was picked up from the north-western Icelandic port of Ísafjörður by the sealer Jason. A week later the Greenland coast was sighted, but progress was hindered by thick pack ice. On 17 July, the coast was still 20 kilometres away and the explorer decided to launch the small boats. On August 11, the crew had covered 200 kilometers and reached Umivik Fjord and set out for their crossing on August 15. They were heading north-west, towards Christianhaab on the west Greenland shores of Disko Bay, 600 kilometres away. Over the next few days the party struggled to ascend the inland ice over a treacherous surface with many hidden crevasses. The weather was generally bad; on one occasion all progress was halted for three days by violent storms and continuous rain.

The crew suffered from the generally bad weather, the storms and the rain and on August 26, Nansen came to realize that they would not be able to reach Christianhaab by mid-September, when the last ship was due to leave. They changed plans and decided for a shorter journey by at least 150 kilometres. On October 3, 1888, they reached Godthaab, where they were greeted by the town’s Danish representative. The crossing had been accomplished in 49 days, making 78 days in total since they had left the Jason. Throughout the journey the team had maintained careful meteorological, geographical and other records relating to the previously unexplored interior.

The party soon learned that no ship was likely to call at Godthaab until the following spring, though they were able to send letters back to Norway via a boat leaving Ivigtut at the end of October. He and his party therefore spent the next seven months in Greenland, hunting, fishing and studying the life of the local inhabitants. On 15 April 1889 the Danish ship Hvidbjørnen finally entered the harbour, and Nansen and his comrades prepared to depart. “It was not without sorrow that we left this place and these people, among whom we had enjoyed ourselves so well“, Nansen recorded.

Even before his Greenland expedition, Nansen had had the idea of going on another research trip. Nansen believed that the ice drift in the Arctic Ocean caused by the ocean current would enable a specially designed ship to get close to the North Pole enclosed in the pack ice. His plans, which he disclosed to the Norwegian Geographical Society in February 1890 and which were met with skepticism and rejection by the experts, provided for the expedition ship and a small, well-trained crew to penetrate as far as the New Siberian Islands, to freeze the ship there and subsequently to suspend it from the ice drift for the further voyage to the north. With the help of public and private sponsors. Nansen had the expedition ship Fram built between June 1891 and October 1892 according to the plans of the Norwegian designer Colin Archer. The special hull construction with an oval cross-section and other special technical features were intended to ensure that the ship would not be damaged in the pack ice.

With the help of public and private sponsors[90] Nansen had the expedition ship Fram built between June 1891 and October 1892 according to plans by the Norwegian designer Colin Archer. The special hull construction with an oval cross-section and other special technical features were intended to ensure that the ship would not be damaged in the pack ice.  On 21 July 1893, the expedition crew on board the Fram left Vardø, the last Norwegian intermediate port, for the eastern Barents Sea. Nansen and his men followed the course of Nordenskiölds Northeast Passage. On 5 October, the ship was finally moored “thoroughly and conscientiously for the winter” at 79° N, 133° E west of Kotelny Island after being completely enclosed by pack ice. The ice drift initially proved to be a sobering undertaking, as neither the direction nor the speed of the drift corresponded to Nansen’s calculations. On 19 November, after a six-week ice drift, the ship was further south than at the beginning, and only on 2 February 1894 did it cross 80° north latitude. 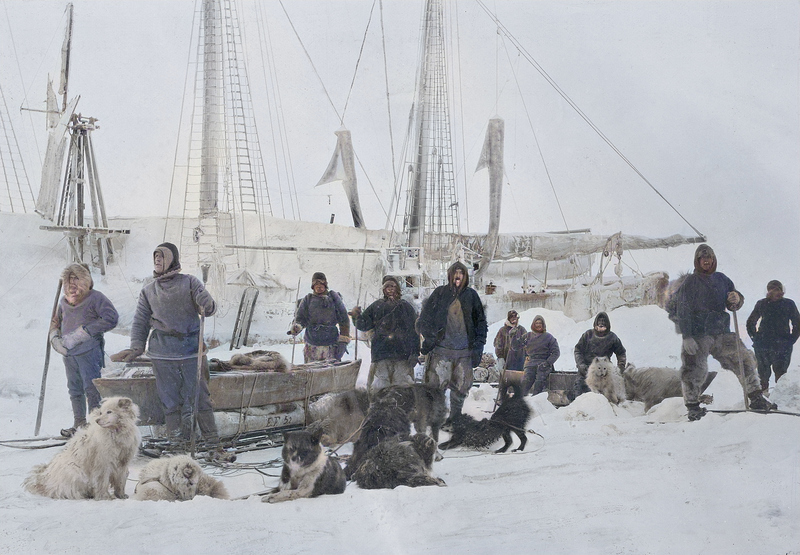 Dash for the Pole and Retreat

On 14 March 1895, when the Fram had reached a width of 84° 4′ N, Nansen and Johansen set off on foot to the North Pole with two kayaks, three transport sleds and 28 sled dogs. Nansen planned to cover the missing 660 km to the North Pole within 50 days, which corresponded to a daily workload of 13 km. After both men had covered the first 120 km at around 17 km per day, the terrain became increasingly uneven, making it more difficult to advance on skis and slowing their cruising speed. In addition, position determination revealed that they were approaching a southern ice drift and that the daily distances they covered did not necessarily bring them closer to their destination. The cold with temperatures of -40 °C also affected them. The last position determination on 8 April resulted in a northern latitude of 86° 13.6′, which was almost three degrees latitude above the previous northern record. Nansen decided not to go any further and instead headed for Cape Fligely on Franz-Josef-Land. For Nansen and Johansen, the way back was an arduous, dangerous and, above all, lengthy undertaking. Nansen’s first task after the return of the expedition was to publish a travel report. The book contained a note by Adolphus Greely, uncommented by Nansen and previously published in Harper’s Weekly magazine, which sharply criticized Nansen’s alleged breach of duty by leaving the Fram to leave the other expedition members hundreds of miles from a safe country to their own fate. Despite this criticism, the publication of the book was a great success and made Nansen financially independent.

During the following 20 years Nansen devoted himself mainly to his work as a scientist. In 1897 he was appointed professor of zoology at the University of Christiania. This gave him ample opportunity to evaluate and publish the scientific data of the Fram expedition. As Nansen grew older, he became more interested in the relations between individuals and nations. In 1905 he took a lively part in the discussion about the dissolution of the union between Norway and Sweden. On the establishment of the Norwegian monarchy, Nansen was appointed its first minister in London (1906–08). In 1917, during World War I, he was appointed head of a Norwegian commission to the United States and negotiated a satisfactory agreement with the U.S. government about the import of essential supplies to Norway. At the first assembly of the League of Nations in 1920, the Norwegian delegation was headed by Nansen, who was to remain one of the outstanding members of the assembly until his death. In April 1920 the council of the League of Nations gave Nansen his first great task, appointing him high commissioner responsible for the repatriation from Russia of about 500,000 prisoners of war from the former German and Austro-Hungarian armies. In 1922 he was awarded the Nobel Peace Prize for his work on behalf of the displaced victims of the First World War and related conflicts. Among the initiatives he introduced was the “Nansen passport” for stateless persons, a certificate that used to be recognised by more than 50 countries. He worked on behalf of refugees until his sudden death in 1930, after which the League established the Nansen International Office for Refugees to ensure that his work continued. This office received the Nobel Peace Prize in 1938. His name is commemorated in numerous geographical features, particularly in the polar regions.

Fridtjof Nansen – A man of action and vision, NRC [10]