You are here: Home › explorer › The Southern Pole of Inaccessibility 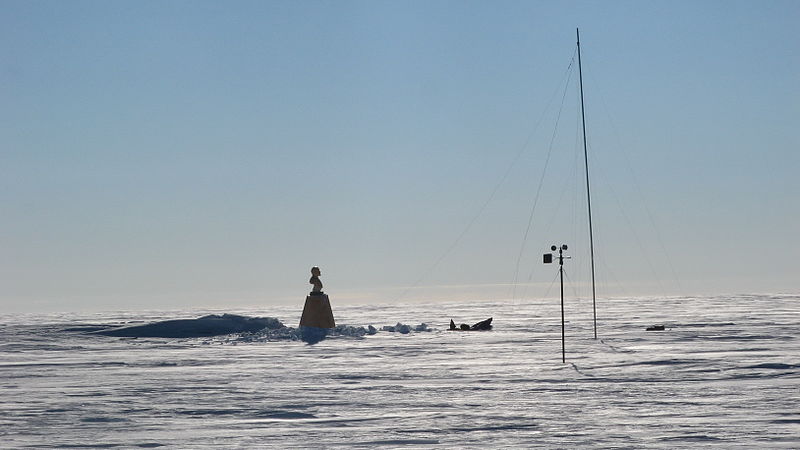 The old Soviet temporary Base (“Pole of Inaccessibility“) reached by Team N2i on 19th January 2007. One can see the bust of V.I. Lenin, installed in the 1950s

The Southern Pole of Inaccessibility

The southern pole of inaccessibility is the point on the Antarctic continent most distant from the Southern Ocean. For the pole, a variety of coordinate locations have been given since some measure the coast to the grounding line or to the edges of ice shelves. Further reasons are the difficulty of determining the location of the solid coastline, the movement of ice sheets and improvements in the accuracy of survey data over the years, as well as possible typographical errors. It is 463 km away from the geographic South Pole and lies at an altitude of 3718 meters above sea level. The average annual temperature is -58.2 °C, one of the lowest in the world.

The southern pole of inaccessibility is far more remote and difficult to reach than the geographic South Pole. On 14 December 1958, the 3rd Soviet Antarctic Expedition for International Geophysical Year research work, led by Yevgeny Tolstikov, established the temporary Pole of Inaccessibility Station named Poljus Nedostupnosti at 82°06′S 54°58′E. A prefabricated wooden bust of Lenin was carried along and erected facing towards Moscow. Station and bust were recorded as historical sites in the annex to the Antarctic Treaty. A second Russian team returned there in 1967.

The Third Soviet Antarctic Expedition included (next to Yevgeny Tolstikov) the Czech astronomer Antonín Mrkos. In order to transport the expedition, two diesel-electric ships were used, RV Ob and Kooperatsiya and they arrived in Antarctica during November – December 1957. Together with the ships crews the expedition consisted of 445 men, of whom 183 were scheduled for wintering. Included in the expedition’s tasks were the organization of the Sovetskaya station  at the pole of relative inaccessibility, the continuation of tractor-sledge traverses in central Antarctica and oceanographic work on the Ob in the southern oceans, and cartography of the coast from Mirny to the Bellingshausen sea. The Estonian writer Juhan Smuul took part of the expedition as a soviet journalist and described the interesting details in his 1960 book “Antarctica Ahoy!: The Ice Book“.

On 4 December, 2006, Team N2i, consisting of Henry Cookson, Rupert Longsdon, Rory Sweet and Paul Landry, embarked on an expedition to be the first to reach the historic pole of inaccessibility location without direct mechanical assistance, using a combination of traditional man hauling and kite skiing.[1] The team reached the old abandoned station on 19 January, 2007, rediscovering the forgotten statue of Lenin left there by the Soviets some 48 years previously. The team found that only the bust on top of the building remained visible; the rest was buried under the snow.