You are here: Home › philosophy › Moses Mendelssohn and the Jewish Enlightenment 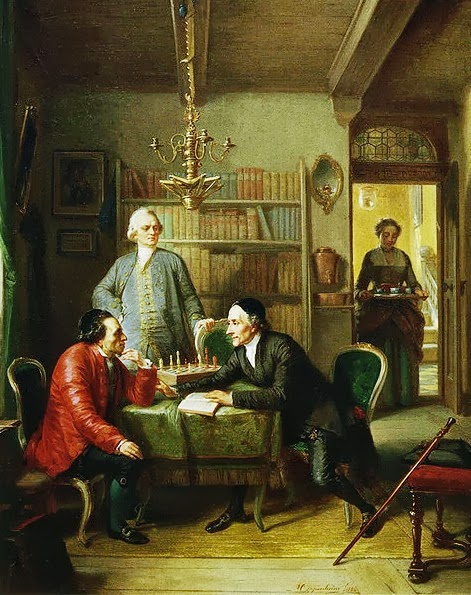 Lessing and Lavater as guests in the home of Moses Mendelssohn. Painting by Moritz Oppenheim (1856)

On September 6, 1729, German Jewish philosopher Moses Mendelssohn was born, who inspired the Haskalah movement of Jewish Enlightenment in the 18th and 19th century. Haskalah was a movement among European Jews that advocated adopting enlightenment values, pressing for better integration into European society, and increasing education in secular studies, Hebrew language, and Jewish history. Moses Mendelssohn’s descendants include also the famous composer and pianist Felix Mendelssohn.[4]

“The state gives orders and coerces, religion teaches and persuades. The state prescribes laws, religion commandments. The state has physical power and uses it when necessary; the power of religion is love and benificence. The one abandons the disobedient and expels him; the other receives him in its bosom and seeks to instruct, or at least to console him.”
– Moses Mendelssohn, Jerusalem, or on Religious Power and Judaism (1783)

Moses Mendelssohn grew up in a poor family in Dessau, Principality of Anhalt, and was educated by his father, Mendel Heymann, active as a Sofer as well as a Dessau community writer and primary school teacher. When Moses was born, his father was already 47 years old. Despite the modest conditions at home, the child was carefully educated and recognized as highly gifted at an early age. Moses is said to have possessed excellent knowledge in Talmud studies at the age of ten. Around 1739, the young Mendelssohn changed to the class of David Fränkel (1707-1762), Chief Rabbi of Dessau, an influential scholar who, after almost 200 years, reissued the Führer der Unschlüssigen, a major work of the important Jewish philosopher Maimonides (1138-1204). When Mendelssohn was about thirteen years old, the curvature of his back became noticeable. He was also prone to stuttering. When Rabbi Fränkel was called to Frankfurt/Oder in 1743 and immediately afterwards to Berlin as Chief Rabbi, his pupil followed him to the Talmudschule in Berlin, which was newly founded in 1742. With the help of older, secularly educated pupils, Mendelssohn acquired German and later Latin, French and English as well as other secular knowledge in these years, in addition to his Talmud studies. He showed an early inclination towards philosophy; he first studied the English early Enlightenment philosopher John Locke in Latin [5] with the help of a dictionary, as well as Christian Wolff and the universal scholar Gottfried Wilhelm Leibniz.

Mendelssohn became a teacher of the wealthy family of silk merchant Isaac Bernhard and started 1754 as an accountant in his newly founded silk factory. Gotthold Ephraim Lessing [7] became one of Mendelssohn’s closest friends in the 1750’s and both influenced each other significantly through the years. Lessing described him in 1754 in the publication of an anonymous letter as “just so funny, as learned and righteous [man]“. Because of Lessing, Mendelssohn was able to publish his first philosophical writings and thoughts (Philosophische Gespräche, Philosophical Conversations, 1755), which caused him first public attention. In his early works, he criticized the Germans for neglecting their native philosophers, mostly Gottfried Leibniz [8] and further works contained anonymous satires and joint works of the two friends together. This made Mendelssohn an influential critic of the newly emerging German literature. Mendelssohn joined the Gelehrtes Kaffeehaus association, one of the oldest sociable civic associations in Berlin, which existed from 1755 to probably 1759.

In the 1760’s Mendelssohn continued his studies and was awarded a prize by the Berlin Academy for his essay “On Evidence in the Metaphysical Sciences” which discussed the application of mathematical proofs to metaphysics. By the way, his competitors were Thomas Abbt and Immanuel Kant.[6] As a result, a fruitful correspondence between the prize winner and Abbt evolved which resolved in writing Immortality of the Soul, a widely read philosophical text, published in several editions and translated into ten languages.. Mendelssohn was soon to be known as the German Plato or the German Socrates. In 1761 Mendelssohn became managing director of the silk factory and in 1768, after Bernhard Isaak’s death, he also became a partner.

In 1763, Johann Kaspar Lavater [9] travelled to Berlin to visit the famous Mendelssohn. They asked him to discuss his views on Jesus and the philosopher answered that he “respected the morality of Jesus’ character”. Lavater later asked Mendelssohn to refute Charles Bonnet‘s essay on Christian Evidences, which caused a lots of public controversy around Lavater and Mendelssohn. This required a lot of tact, skill and strength due to the delicate situation – the Jews lived barely tolerated in a mostly Christian society and Mendelssohn was regarded as their spokesman and representative. In 1771 Mendelssohn suffered, probably in connection with these efforts, a psychophysical breakdown which forced him to temporarily suspend any philosophical activity. In the same year Mendelssohn’s proposed admission to the Prussian Academy of Sciences at the request of Johann Georg Sulzer, president of the philosophical class, failed because of Frederick II’s resistance. 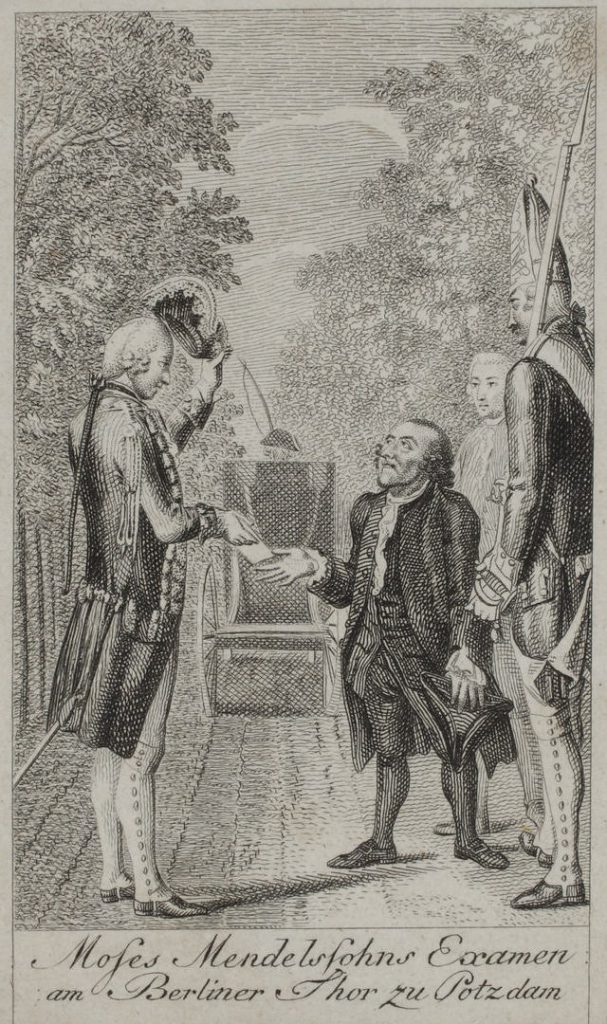 Copper engraving by Daniel Chodowiecki: Moses Mendelssohn is examined at the Berliner Tor zu Potsdam, 1792. Middle Mendelssohn, who hands over his papers to the Prussian officer for control.

In the further years of his work, Mendelssohn tried to bring Jewish people closer together and closer to their religion and culture. He translated several holy books for the Jewish community including numerous commentaries. He also took part in the founding of a public Jewish school in Berlin around 1778, which was highly welcomed in the community. Mendelssohn fought for the Jews’ rights and general acceptance and published several works on the subject. Immanuel Kant openly supported Mendelssohn’s writings but also mentioned issues in implementing the author’s ideas in society.

“Divine religion … does not prod men with an iron rod; it guides them with bands of love. It draws no avenging sword, dispenses no temporal goods, assumes no right to any earthly possessions, and claims no external power over the mind. Its weapons are reason and persuasion; its strength is the divine power of truth.”
– Moses Mendelssohn, Jerusalem, or on Religious Power and Judaism (1783)

In 1783 the secret Society of the Friends of the Enlightenment (Berlin Wednesday Society) offered Mendelssohn membership, but he refused. Shortly afterwards he was appointed an honorary member, who had access at any time to the society limited to 24 men. He filled this role with commitment. In the debate of the Society on the question “What is Enlightenment?“, Mendelssohn advocated unrestricted freedom of thought and speech in a first vote. The limits of the Enlightenment should not be determined by laws and censorship measures, but by the individual Enlightenment philosopher through sincerity and consideration of circumstances and time.

“In all contemplation and under all circumstances, the obstruction of Enlightenment is far more perishable than the most untimely Enlightenment. (…) The evil, which by chance can arise from the Enlightenment, is also of the nature that it subsequently lifts itself.”

Mendelssohn’s fame and overall reputation grew on and on until Lessing passed away and a serious correspondence between Mendelssohn and Friedrich Heinrich Jacobi evolved. Mendelssohn intended to write a book about Lessing and his achievements, but Jacobi accused Lessing to have been a convinced atheist. The correspondence between both of them was later published and caused lots of criticism towards Mendelssohn. Mendelssohn died on 4 January 1786 in Berlin and was buried one day later at the Jewish Cemetery in Berlin, where a reconstructed tombstone still commemorates him today.

Still, Mendelssohn’s contributions to philosophy are numerous and he is remembered as the father of Reform Judaism.