You are here: Home › philosophy › Immanuel Kant – Philosopher of the Enlightenment 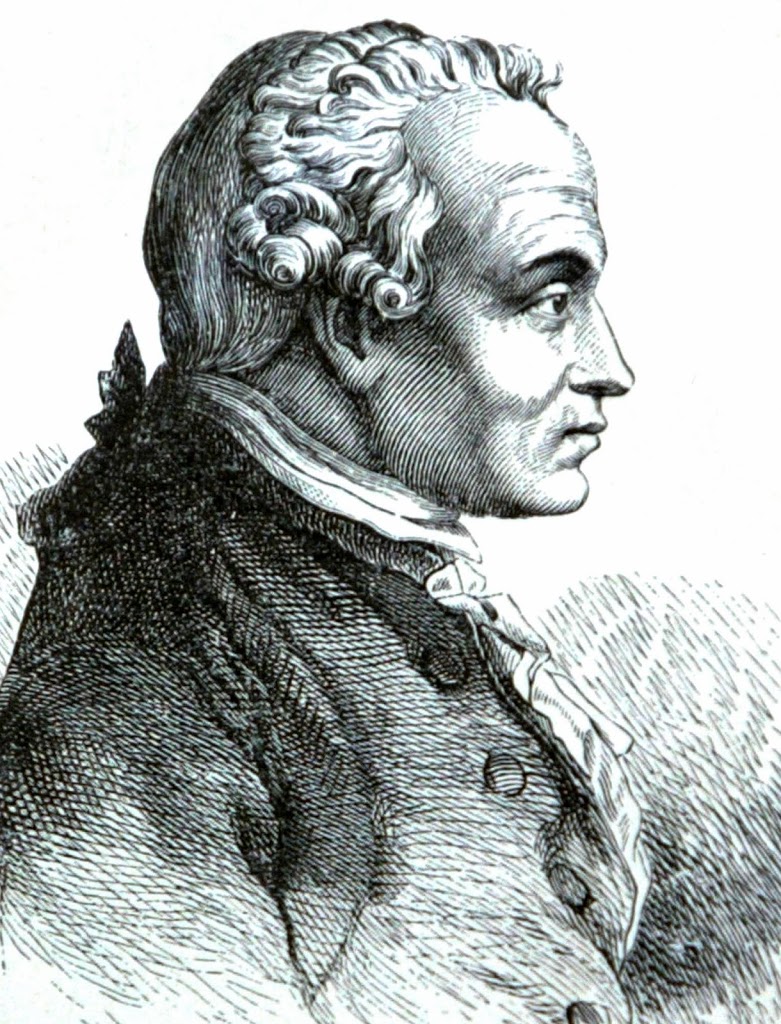 On February 12, 1804, the great German philosopher Immanuel Kant passed away. He is widely considered to be a central figure of modern philosophy. He argued that human concepts and categories structure our view of the world and its laws, and that reason is the source of morality. His thought continues to hold a major influence in contemporary thought, especially in fields such as metaphysics, epistemology, ethics, political philosophy, and aesthetics. The problem with such a giant as Kant is that one small blog post is always absolutely insufficient to cover the subject adequately.

“Human reason has this peculiar fate that in one species of its knowledge it is burdened by questions which, as prescribed by the very nature of reason itself, it is not able to ignore, but which, as transcending all its powers, it is also not able to answer.”
– Immanuel Kant, Critique of Pure Reason (1781; 1787), Preface, A vii

Immanuel Kant was born on April 22, 1724, in Königsberg, today the city of Kaliningrad, Russia, as the fourth of nine children. And there, he remained for the entire rest of his life. Actually, he never traveled more than ten miles from Königsberg. In his youth, Kant was a solid, albeit unspectacular, student. He was brought up in a Pietist household that stressed intense religious devotion, personal humility, and a literal interpretation of the Bible. Kant received a stern education. From early age on, he showed a great aptitude to study. He was first sent to Collegium Fredericianum and then enrolled at the University of Königsberg in 1740, at age of 16. Kant studied the philosophy of Gottfried Leibniz [1,2] and Christian Wolff [7] under Martin Knutzen, a rationalist who was also familiar with developments in British philosophy and science and who introduced Kant to the new mathematical physics of Isaac Newton.[8] His father’s stroke and subsequent death in 1746 interrupted his studies and Kant became a private tutor in the smaller towns surrounding Königsberg. Nevertheless, he continued his scholarly research. In 1747, he published his first philosophical work, Thoughts on the True Estimation of Living Forces.

The Nature of the Earth’s Rotation

Of course Kant is best known for his work in the philosophy of ethics and metaphysics, but he also made significant contributions to other disciplines. Among them, he made an important astronomical discovery, namely a discovery about the nature of the Earth’s rotation, for which he won the Berlin Academy Prize in 1754. In the early 1760s, Kant produced a series of important works in philosophy. The False Subtlety of the Four Syllogistic Figures, a work in logic, was published in 1762. Two more works appeared the following year: Attempt to Introduce the Concept of Negative Magnitudes into Philosophy and The Only Possible Argument in Support of a Demonstration of the Existence of God. In 1770, at the age of 45, Kant was finally appointed Professor of Logic and Metaphysics at the University of Königsberg.

The Critique of Pure Reason

After a period of silence, Kant published his seminal Critique of Pure Reason in 1781. Although now uniformly recognized as one of the greatest works in the history of philosophy, this Critique was largely ignored upon its initial publication. The book was long, over 800 pages in the original German edition, and written in a convoluted style. Kant was rather disappointed with the first Critique’s reception. Recognizing the need to clarify the original treatise, Kant wrote the Prolegomena to any Future Metaphysics in 1783 as a summary of its main views. 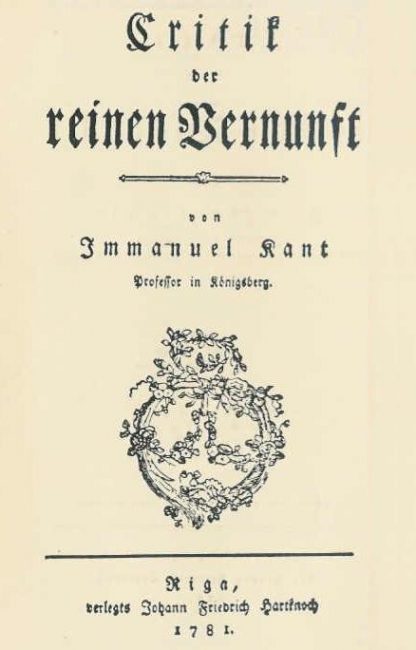 Sapere Aude – Dare to be Wise

“Human reason has this peculiar fate that in one species of its knowledge it is burdened by questions which, as prescribed by the very nature of reason itself, it is not able to ignore, but which, as transcending all its powers, it is also not able to answer.”
– Immauel Kant, The Critique of Pure Reason, (1781), Preface, A vii

Kant’s reputation gradually rose through the 1780s, sparked by a series of important works: the 1784 essay, “Answer to the Question: What is Enlightenment?“. Actually, we read this essay (partly) in school. Kant defined the Enlightenment as an age shaped by the Latin motto Sapere aude (“Dare to be wise“). He maintained that one ought to think autonomously, free of the dictates of external authority. With this work he reconciled many of the differences between the rationalist and empiricist traditions of the 18th century. It had a decisive impact on the Romantic and German Idealist philosophies of the 19th century and also served as a starting point for many 20th century philosophers.

The Critique of Practical Reason

Kant published a second edition of the Critique of Pure Reason in 1787, heavily revising the first parts of the book. Most of his subsequent work focused on other areas of philosophy, such as his moral philosophy, notably in 1788’s Critique of Practical Reason and 1797’s Metaphysics of Morals.  The last fifteen years of his life were marked by the steadily intensifying conflict with the censorship authority, whose leadership the Prussian King Friedrich Wilhelm II had entrusted to the new Minister of Culture Johann Christoph von Wöllner. Three years after Wöllner’s censorship edict of December 19, 1788, Kant came into conflict with censorship for the first time because of his work On the Failure of All Philosophical Experiments in Theodicy. In another edict of 1794, he was accused of the “disparagement of some main and fundamental teachings of Holy Scripture and Christianity“. The 1790 Critique of Judgment applied the Kantian system to aesthetics and teleology. Kant continued to teach until 1796, but was instructed to abstain from religious writings, since they spread deistic and sociinian ideas that were not compatible with the Bible. His friend Johann Erich Biester, the editor of the Berlinische Monatsschrift in Berlin, complained to the king, who rejected the complaint.

The Philosopher in Private

Kant is often portrayed as a stiff professorial person bound to a regular daily routine, driven by duty and totally focused on his work. But this image is an exaggeration. As a student he was a good card player and earned an extra income with billiards. At societies, in which he liked to participate, he was considered gallant, dressed up with fashionable clothes. Also his legendary punctuality, according to which other Königsbergers allegedly even set their clocks, was much more like that of his close friend, the English businessman and banker Joseph Green. His rigorously planned daily routine forced Kant to leave Green’s house punctually at seven o’clock every time he visited. At 4:45 in the morning, Kant was woken by his valet with the words “It’s time!” and went to bed at 10 p.m. For lunch he usually invited friends and cultivated sociability, but avoided philosophical topics. He also went for a walk at the same time every day. 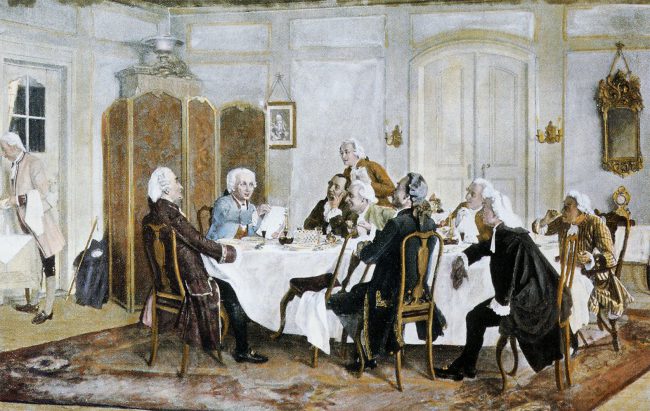 Kant and his table companions, painting by Emil Doerstling (1892/93)

Philosophy is Moving On

But despite his success, philosophical trends were moving in another direction. Many of Kant’s most important disciples transformed the Kantian position into increasingly radical forms of idealism. Kant opposed these developments and publicly denounced Fichte [6] in an open letter in 1799, which should be one of his final acts. There is so much more to say about Kant and his work that doe not fit into a tiny blog post. Immanuel Kant died at Königsberg on 12 February 1804, uttering “Es ist gut” (“It is good”) before expiring.