You are here: Home › history › The Virgin Queen – Elizabeth I. 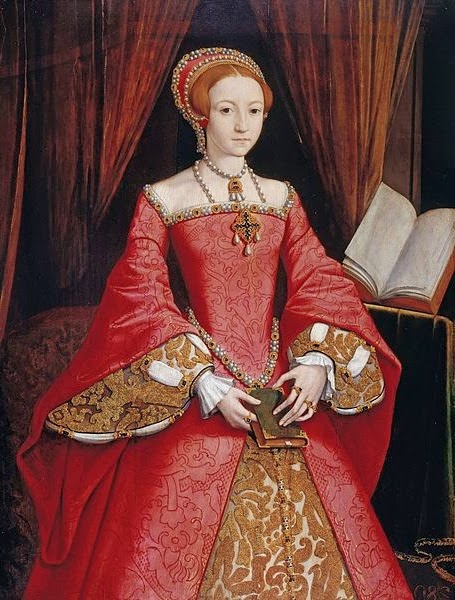 On September 7, 1533, queen regnant of England and Ireland Elizabeth I was born. Also referred to as the ‘Virgin Queen’, the daughter of Henry VIII was the fifth and last monarch of the Tudor dynasty. Elizabeth‘s reign is known as the Elizabethan era, famous above all for the flourishing of English drama, led by playwrights such as William Shakespeare, and for the seafaring prowess of English adventurers such as Sir Francis Drake.[11]

“Though I be a woman yet I have as good a courage answerable to my place as ever my father had. I am your anointed Queen. I will never be by violence constrained to do anything. I thank God I am endued with such qualities that if I were turned out of the Realm in my petticoat I were able to live in any place in Christendom.” – Elizabeth I, Response to Parliament, 1566

Almost all the time through her reign, Elizabeth was a very popular queen. She became a legend through her politics and the myths that surround her until this day. She was the daughter of King Henry VIII and Anne Boleyn. It is known that probably, her birth was not the happiest surprise in Henry’s life. He wanted a son to follow his footsteps wherefore he got divorced from his first wife, Catherine of Aragon. During the first years, Elizabeth witnessed a constant bride changing of her father’s and it is assumed that this was a major factor why she never got married herself. It is also assumed that she never married due to political and religious issues, an important aspect during these years. Also Elizabeth was known to be afraid of childbirth, as many women back in the day died from infectious diseases afterwards. 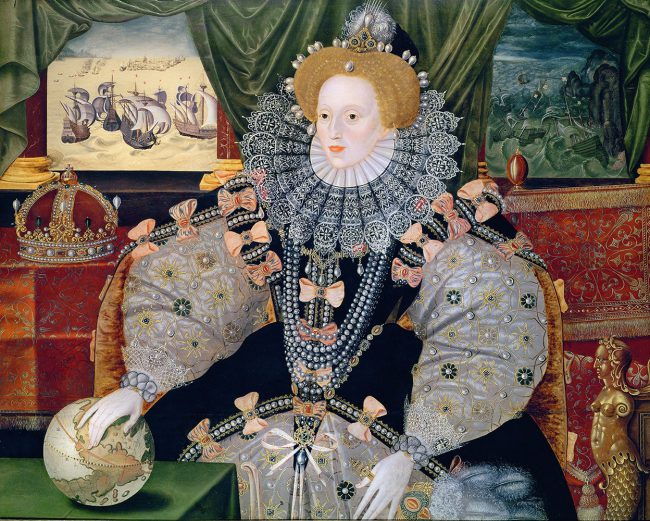 Portrait commemorating the defeat of the Spanish Armada, depicted in the background. Elizabeth’s hand rests on the globe, symbolising her international power. One of three known versions of the “Armada Portrait”.

Succeeding to the Throne

However, she was given an impressive education throughout her childhood and was liked by her teachers, excelling in every subject. Her favorite fields of studies were languages, being able to speak as much as five fluently in later years. In 1547, the king passed away and its was now King Edward VI, who ruled the country. Unfortunately he was only 9 years old, wherefore his uncle took care of his responsibilities. Elizabeth was now second in line to the throne. After Edward died, it was Queen Mary‘s turn, but she was not very popular and Elizabeth was taken to prison after being accused of treason. In 1558, she finally succeeded to the throne and started enjoying the new freedom.

Elizabeth and the Church of England

At the time of Elizabeth’s accession to the throne, the situation in England was very tense. The economy was down, the country was at war with France, and it was also torn apart by questions of faith. Elizabeth first set out to push back Catholicism, which had been reintroduced by her sister. In 1559, by means of the Act of Uniformity, she introduced the compulsory use of the Book of Common Prayer in church services. In the same year, the queen renewed Henry VIII’s Act of Supremacy, again making the Church of England subject to the crown. With this, Elizabeth finally separated herself from the Catholic Church.

Foreign Politics and the Defeat of the Spanish Armada

“I know I have the body but of a weak and feeble woman; but I have the heart and stomach of a king, and of a king of England too, and think foul scorn that Parma or Spain, or any prince of Europe, should dare to invade the borders of my realm; to which rather than any dishonour shall grow by me, I myself will take up arms, I myself will be your general, judge, and rewarder of every one of your virtues in the field.”
– Elizabeth I, Tilbury Speech, August 1588

The war with France was settled on April 3, 1559, in the Peace of Cateau-Cambrésis. While still in Mary’s reign, Calais, England’s last bastion on the mainland, had fallen to France in January 1558. After the failure of military efforts, Elizabeth decided to support no more expensive wars, and in 1564 relinquished English claims to Calais in return for financial compensation. Elizabeth’s grandfather Henry VII (reigning 1485-1509) had founded the English merchant navy, her father Henry VIII the English navy by having English ships equipped with long-range guns. Elizabeth’s naval treasurer Sir John Hawkins (1532-1595) was able to strengthen the navy even further. The country visibly developed into a naval power.

The raids of the English privateers and the execution of Mary Stuart gave the Spanish king Philip II the reason to further intensify the war against England and to plan an invasion of England. In early April 1588, Philip II sent out the Spanish Armada (130 ships in all) to invade England. The Armada was to board a Spanish invasion force in the Netherlands under Alessandro Farnese, Duke of Parma and one of Philip’s best generals, and cross into England. The plan was to first establish a base on the Isle of Wight. But on July 19, English scouts sighted the Armada off the coast of Plymouth, and the English fleet under Francis Drake and Sir Charles Howard, the Earl of Nottingham, was able to intercept the Spanish in the English Channel. Since the plan to establish a forward troop base had failed, the Spanish moored their fleet near the French town of Calais. At Calais, Drake had a group of boarders sail in the direction of the Spanish. The Spanish had to weigh anchor to avoid the burning ships, therefore the English defenders were able to fight the Spanish. Because the English had lighter and faster ships, they were able to inflict more damage on the Spanish ships than vice versa. Thus, the naval battle of Gravelines ended in a draw, by and large. Since the Spanish had weighed anchor and therefore could not transport the troops of the Duke of Parma, the Duke of Medina Sidonia decided to sail around the coasts of Scotland and Ireland in order to get back to Spain and Portugal by this route. On the way, however, the Spanish were caught in a severe storm that stranded and sank almost 60 of the 130 Spanish ships on the coast of Ireland. Barely half of the Spanish ships and only a third of the crew reached home.

As a result of a revolt by a large number of the Scottish lords, Mary Stuart, Queen of Scots,[5] had been imprisoned at Loch Leven Castle in the summer of 1567 and forced to abdicate. Since Elizabeth’s father’s marriage to Anne Boleyn had never been legitimized by the pope, the Catholic Mary Stuart considered herself the rightful queen of England. She was the great-granddaughter of Henry VII and had not yet given up her claim to the English throne. Elizabeth had the former Scottish queen arrested on May 19, 1568. She justified the honorable imprisonment with the grave suspicion of Mary’s complicity in the murder of her husband Lord Henry Darnley. On February 25, 1570, Elizabeth was excommunicated by Pope Pius V (1566-1572) with the papal bull Regnans in Excelsis. In this bull, Elizabeth was denied the right to the English throne and English Catholics were threatened with excommunication if they continued to be loyal subjects of Elizabeth. This led to the Ridolfi Conspiracy: Elizabeth was to be assassinated and replaced by Mary Stuart, all with the support of Spanish and French troops. Involved in the conspiracy, besides Mary Stuart, was Thomas Howard, 4th Duke of Norfolk, who wanted to marry Mary. On September 7, 1571, the Duke of Norfolk, the only Duke of England, was arrested and, after much hesitation on Elizabeth’s part, executed in June 1572. The English Parliament demanded the execution of Mary, who was accused of participation in the conspiracy in October 1586 and sentenced to death on October 25. Elizabeth signed the execution order on February 1, 1587, and Mary was executed on February 8. Behind the unraveling of the conspiracy was the English intelligence officer Francis Walsingham, who thus established his later position.

Queen Elizabeth I loved the theater and supported the artists in many possible ways. Elizabeth was known to be religiously tolerant and disliked extremism of any kind, but unfortunately her government followed the rules more strictly than she had wished to. While she established her position as the queen, many marriage proposals reached the royalty. She rejected every proposal but it is assumed that she had indeed feelings for Robert Dudley, whom she was imprisoned with. Too bad that marrying him would have meant a political outrage, since he was known as a traitor and may have played a role in his wife’s mysterious death. In September 1560, Dudley’s wife was found dead at the foot of a staircase in their home. Although the judicial inquiry had found an accident, rumors circulated everywhere that Dudley had had his wife murdered so that he could marry the queen. However, the friendship between Dudley and Elizabeth lasted until his death in September 1588 and could only be temporarily marred by her anger over his marriage to her second cousin Lettice Knollys in 1579. Another serious contender was Francis, Duke of Alencon, but he also played a way too difficult political role as if this was even imaginable.

The Question of Succession

Through the years, the question of who would succeed her became more and more important. At first, the relations between her and Philipp, King of Spain were good but suddenly they were serious enemies. He even attempted to invade England but was defeated by English forces. Elizabeth’s popularity was at its highest point by then, proving that she could lead the country by herself. In later years though, the queen reached a period of depression, since some of her advisors as well as several friends passed away. Elizabeth herself passed away on March 24, 1603 at Richmond Palace and James VI became King of England, ending the Tudor dynasty.