You are here: Home › philosophy › Johann Lavater – Physiognomic Fragments for the Promotion of Human Knowledge and Human Love 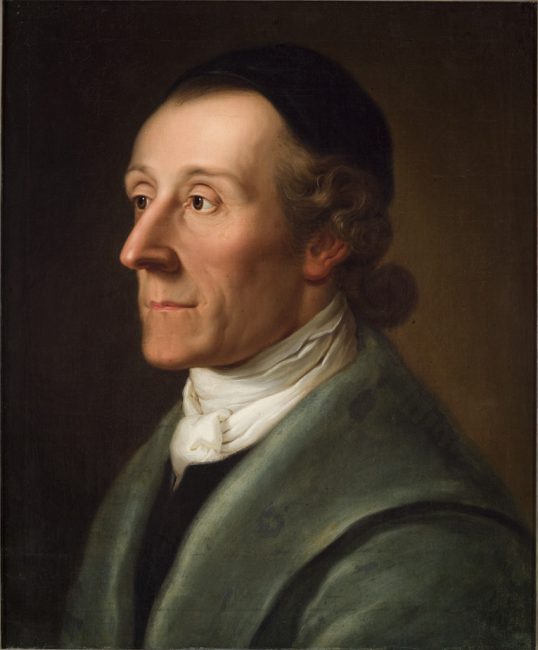 On November 15, 1741, Swiss poet, writer, philosopher, physiognomist and theologian Johann Kaspar Lavater was born. He was a main representative of physiognomics in the time of Enlightenment.

Lavater was born in his parents’ house at Spiegelgasse 11 (Lage) in Zurich in 1741, the son of a respected doctor. He attended first the German School, then the Latin School, from 1754 the Collegium Humanitatis for the study of theology, and from 1756 to 1762 the Collegium Carolinum in Zurich, where his teachers included Johann Jakob Bodmer and Johann Jakob Breitinger. 1762 he was ordained. In the same year he and the later painter Johann Heinrich Füssli drew attention to the unjust activities of the former bailiff Felix Grebel.

In 1763 Lavater and his friend Johann Heinrich Fuseli made an educational journey to Northern Germany to receive further training for the clerical office from the enlightened reform theologian Johann Joachim Spalding in Barth in Swedish Pomerania. On the journey there via Berlin he became acquainted with many important men of his time (including Christian Fürchtegott Gellert, Moses Mendelssohn,[1] Friedrich Gottlieb Klopstock). In Barth, where he stayed for eight months, he started his literary career first with critical works. After his return to Zurich in 1764, Lavater founded several societies and published first important texts. 1769 Johann Caspar Lavater became a deacon, 1775 parson at the orphanage church, 1778 deacon and 1786 parson at the St.-Peters-Kirche in Zurich.

In 1769, Lavater translated Genevan natural scientist and philosopher Charles Bonnet‘s Idées sur l’état futur des êtres vivants, ou Palingénésie philosophique (Ideas on the future state of living beings, or Philosophical Palingenesis) as a philosophical study of the evidence for Christianity and dedicated this writing to Moses Mendelssohn, the enlightener, in order to persuade him either to refute it or to convert to Christianity. This was the beginning of a confrontation between Mendelssohn and Lavater in letters, which was followed by the scholarly public throughout Europe. Lavater received support in this confrontation from the lawyer and theologian Johann Balthasar Kölbele.

In 1774, on a journey along the Rhine, which largely took place on a lurking fir, he met Johann Wolfgang von Goethe, [2] Johann Bernhard Basedow and Johann Gerhard Hasenkamp, among others. Goethe wrote a small verse about a meal with Lavater and Basedow, which became a winged word: “Prophet on the right, prophet on the left, the world child in the middle“. He was accompanied by the draughtsman and engraver Georg Friedrich Schmoll, who came from Ludwigsburg and, after his return, engraved many of the portraits made on the journey in copper for the Physiognomische Fragmente (Phsiognomic Fragments).

Probably Lavater’s best known work are his Physiognomischen Fragmente, zur Beförderung der Menschenkenntniß und Menschenliebe (Physiognomic Fragments, for the Promotion of Human Knowledge and Human Love), in which he gave instructions on how to recognize different characters by their facial features and body shapes. With this theory of physiognomics, he made a major contribution to the popularity of silhouettes in Germany in the second half of the 18th century. Lavater’s theory of physiognomy was lively discussed at the time by Lichtenberg,[3] Goethe and Humboldt, [4] among others. Famous artists such as Daniel Chodowiecki, Johann Rudolph Schellenberg and Johann Heinrich Lips provided models for his Physiognomics collection.

Portraits of Daniel Chodowiecki for the Physiognomics Collection of Lavater

Letters of a Russian Traveler

After Lavater had been called to preach at St. Ansgarius Church in Bremen, he undertook a journey there in 1786. Although he turned down the post and remained active as a pastor in Zurich, he was received with enthusiasm on the trip and in Bremen. In 1787 he began a correspondence with Nikolay Karamzin, who described his visit to him in the book Letters of a Russian Traveler. In 1793, at the invitation of the minister Bernstorff, he undertook a trip to Copenhagen.

The last years of his life were largely determined by political events. Since Lavater was critical of the effects of the French Revolution and also strongly criticized the invasion of French troops into Switzerland, he was suspected by the Helvetian government of having colluded with Russia and Austria. On May 16, 1799, he was arrested and deported to Basel. On June 10, he was released and returned to Zurich. When, during the conquest of the city by André Masséna on September 26 of the same year, he was helping wounded soldiers on the street, he was hit by an enemy bullet. 15 months later, he died of the consequences of the injuries he suffered. His son-in-law Georg Gessner published a three-volume biography the year following Lavater’s death.