You are here: Home › paleontology › Mary Leakey and the Discovery of the false ‘Nutcracker Man’ 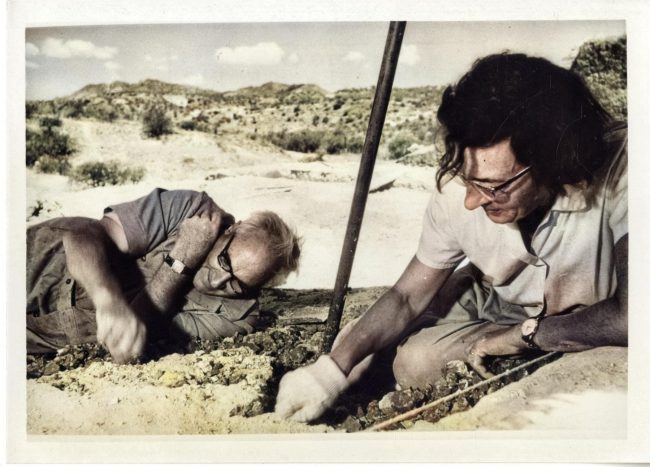 The Most Disciplined Student

Mary Leakey was born as Mary Douglas Nicol , the daughter of the then well-known landscape painter Erskine Edward Nicol and the hobby painter Cecilia Marion Frere, who lived for years in France in the Dordogne. Frequent visits to prehistoric and archaeological sites in France aroused her interest in such topics even as a small child; furthermore, her father was friends with Howard Carter, who had discovered the tomb of Tutankhamun in Egypt.[6] After her father’s death, Mary had to return to London with her mother and was supposed to receive an adequate education. Mary Nicol, not the most disciplined student these days, was dismissed from school several times and therefore never managed to reach an educational degree.

After various difficulties, Mary met the famous anthropologist Louis Leakey at a dinner party in Cambridge in 1933, who was in need of an illustrator for his book, ‘Adam’s Ancestors‘.[4] While she was doing that work they became romantically attached. Louis Leakey was still married when he started living with Mary, which caused a scandal that ruined his career at Cambridge University. Finally, the couple got married when Louis’ wife Frida divorced him in 1936. In 1937 both went to further excavations in Kenya and some years later to Tanzania. Mary Leakey achieved her first important discovery in Kenya. At Lake Victoria she found the most complete skull of a Proconsul africanus in 1948. Due to political unrest, the Leakeys had to leave Kenya shortly afterwards and went back to Tanzania, where Mary Leakey copied around 1600 Stone Age drawings, which later became the basis of her book Africa’s Vanishing Art. Many of her drawings were lost shortly thereafter due to deliberate damage, so that her copies were given a permanently high scientific value.

However, Mary Leakey only became world-famous after she found a skull in the Olduvai Gorge on 17 July 1959 that was still largely intact and even had teeth in its place in the upper jaw: Paranthropus boisei, then called Zinjanthropus or Zinji for short, the first specimen of its kind and at the same time the oldest fossil ever found by a representative of the Hominini. 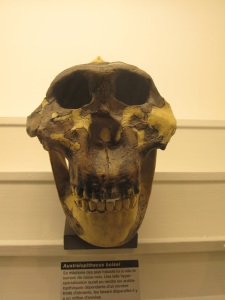 Typical for the Paranthropus boisei are the enormous back teeth and his huge jaw, therefore he has been called the ‘Nutcracker Man‘. Earlier studies resulted in the assumption that the Paranthropus boisei mainly subsisted on nuts and fruits, due to his strong jaw. The nutritious behavior of the ancestor can lead to finding out essential aspects of his life as well as the reason of his extinction and the vegetation he has lived in. While researching on the hominini, scientists examined their dental enamel. This was possible, because through the years many fossils of the Paranthropus boisei have been found. It was discovered, that carbon-atoms of herbal food could be found in their dental enamel. This proved that his nutritious behavior is more alike with the one of a zebra‘s or a hippo‘s ancestor, than with other primates, that preferred fruits. The huge jaw is presumably due to his ability to take huge loads of tropical grass into his mouth. Many scientists assume that the extinction of the Paranthropus boisei 1.4 million years ago is caused by his limited way of nutrition, but this could never be proven to this day.

Her son Jonathan was born in 1940, her daughter Mary in 1943 and finally her son Richard was born in 1944. In the early years, the family in Africa suffered considerably from financial difficulties, which were only overcome around 1960 – but this in no way led to a stabilization of the relationship between Mary and Louis: From 1968 they hardly lived together any more, which was mainly due to the many flings of Louis.

Even after the death of her husband in 1972, she continued to organize excavations in the Olduvai area, during which the famous footprints of two pre-humans, one large-footed and one small-footed, were discovered near Laetoli in 1978. Mary Leakey interpreted them as traces of individuals of the genus Homo, other researchers (including Donald Johanson) assigned them to the genus Australopithecus.

In 1984 Mary Leakey published her autobiography “Disclosing the Past” and was also present at her excavations in Tanzania until shortly before her death – now blinded in one eye. Mary Leakey died on 9 December 1996, in Nairobi, Kenya, at the age of 83.