You are here: Home › explorer › Vivian Fuchs and the Commonwealth Trans-Antarctic Expedition 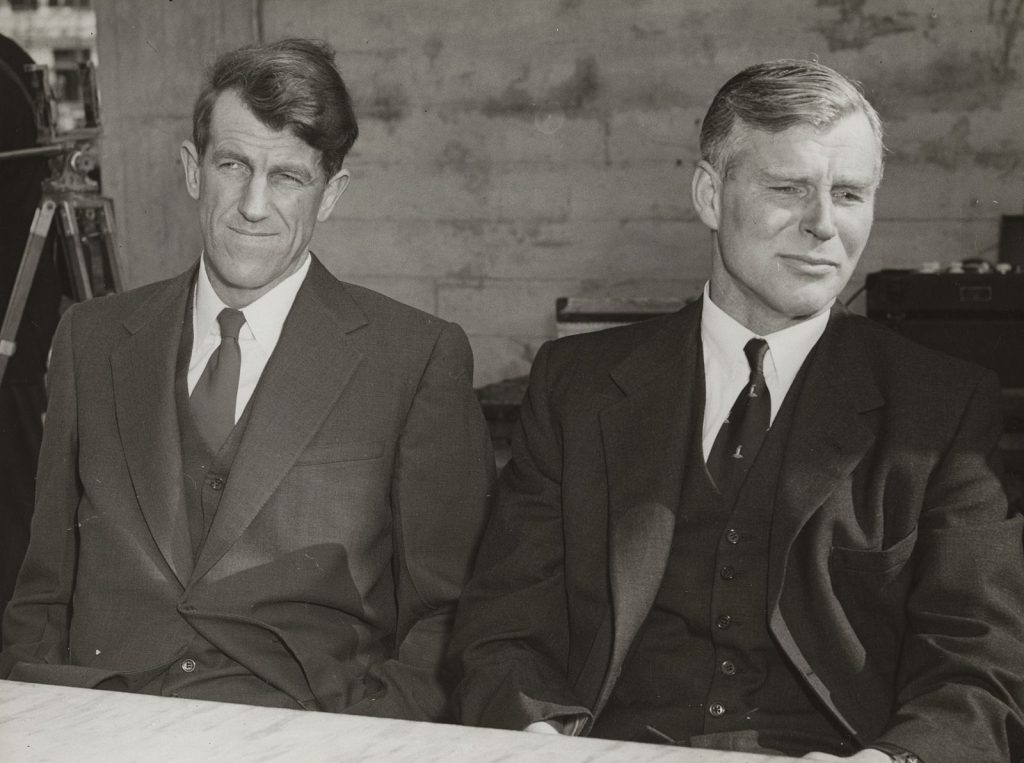 Sir Edmund Hillary and Sir Vivian Fuchs during a press conference on a Wellington wharf, 1958

On February 11, 1908, British geologist and explorer Sir Vivian Ernest Fuchs was born. Fuchs initiated and led together with Sir Edmund Hillary [5,6] the Commonwealth Trans-Antarctic Expedition of 1957-58, which completed the first overland crossing of Antarctica in 1958.

Vivian Fuchs was born in 1908 in Freshwater, Isle of Wight, the son of the German immigrant Ernst Fuchs from the Jena area and of his British wife Violet Watson. He visited Brighton College and St John’s College, Cambridge and was trained as a geologist, and considered the profession a means of pursuing his interest in the outdoors. He completed his first expedition to Greenland in 1929. One year later, Fuchs travelled with a Cambridge University expedition to study the geology of East African lakes with respect to climate fluctuation. He further became part of Louis Leakey‘s expedition to Olduvai Gorge [4]. Fuchs earned his PhD from Cambridge in 1937. During the late 1940s, Fuchs was part of the Falkland Islands Dependencies Survey (now the British Antarctic Survey) with the goal to promote Britain’s claims to Antarctica and to support scientific research.

During World War II, Vivian Fuchs joined the Territorial Army and by the end of the war reached Germany to see the release of prisoners from the Belsen concentration camp. He governed the Plön district in Schleswig-Holstein until October 1946, when he was discharged from military service with the rank of Major.

In 1947 Fuchs made his first trip to Antarctica as head of the Falkland Islands Dependencies Survey, which later became the team for the British Antarctic Expedition of 1951. Between 1949 and 1950 he and his team remained in Antarctica for two summers without external contact due to particularly difficult weather conditions. After his return he was awarded the gold medal of the Royal Geographical Society. During his time in the ice, he made a plan to try to cross Antarctica, fulfilling Ernest Shackleton’s plan, which he had to abandon. At the same time, he wanted to use such a journey for his research work to determine the ice thickness of the Antarctic using seismic equipment.

The Commonwealth Trans-Antarctic Expedition from 1955 to 1958 was the first expedition to reach the South Pole overland for 46 years, preceded only by Amundsen’s and Scott’s respective parties in 1911 and 1912. The preparations began in 1955 and Vivian Fuchs sailed with an advance party from London to Antarctica in the Canadian sealer Theron to establish Shackleton Base.

Setting Out for a Transcontinental Journey

During the southern summer of 1956–1957 the expedition spent consolidating Shackleton Base, and establishing a new base 480 km south. In 1957,  Fuchs finally set out on the transcontinental journey with 12 men. The team of Edmund Hillary set up Scott Base, Fuch’s final destination, on the opposite side of the continent at McMurdo Sound on the Ross Sea. Hillary and his team of three men were responsible for route-finding and laying a line of supply depots up the Skelton Glacier and across the Polar Plateau on towards the South Pole, for the use of Fuchs on the final leg of his journey. Other members of Hillary’s team carried out geological surveys around the Ross Sea and Victoria Land areas. On January 3, 1958 Hillary’s party was just the third to reach the Pole overland.

Meeting Hillary at the Pole

Fuchs’ team reached the Pole from the opposite direction on 19 January 1958 where he met Hillary. Vivian Fuchs continued overland and followed the route that Hillary had laid, while Hillary flew back to Scott Base in a US plane. The overland party finally arrived at Scott Base on March 2, 1958, having completed the historic crossing of 3,473 km of previously unexplored snow and ice in 99 days. A few days later the expedition members left Antarctica for New Zealand on the New Zealand naval ship Endeavour. Thereby, Hillary successfully led the third expedition – after Amundsen and Scott – to the Pole, Fuchs the fourth. Hillary’s main task was to set up supply stations for the Fuchs team on the second half of the expedition. During the crossing, Fuchs covered a distance of 3,440 kilometres in exactly 99 days. Queen Elisabeth II raised him to knighthood in 1958.

From 1958 to 1973, Vivian Fuchs was director of the British Antarctic Survey and founded the Fuchs Foundation, the aim of which was to allow young and underprivileged people to take part in training programmes and expeditions. In 1960 he was awarded the Prestwich Medal of the Geological Society of London. Fuchs was also President of the British Association for the Advancement of Science from 1971 and was elected to the Royal Society in 1974. From 1982 to 1984 he was President of the Royal Geographical Society. Vivian Fuchs died in 1999 in Cambridge, Cambridgeshire, England, at age 91.