You are here: Home › communication › Mary Had a Little Lamb – Edison and the Phonograph 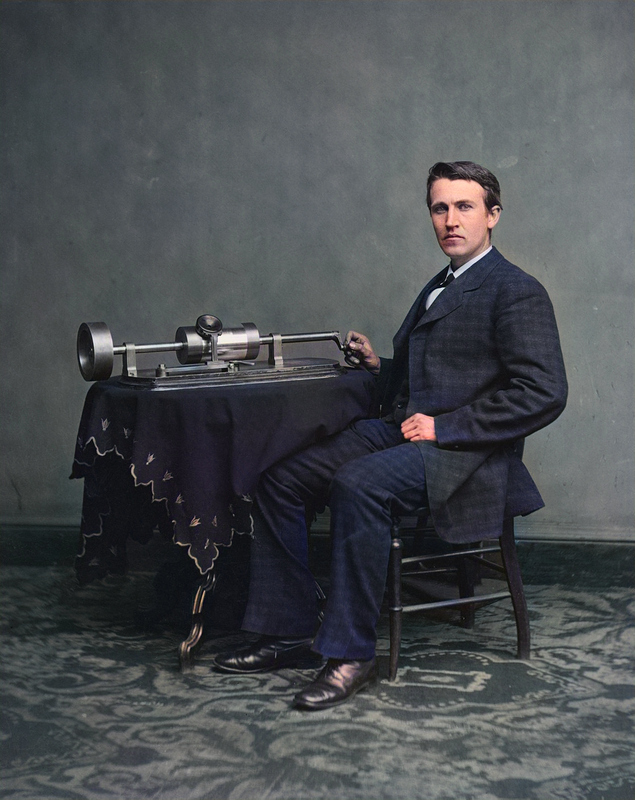 Thomas Edison and his early phonograph (1877)

On July 18, 1877 Thomas A. Edison conceived the first idea for his phonograph, the very first mechanical tool for recording and reproducing (replaying) sound. The phonograph also was the invention that first gained him public notice.

Actually, the phonograph was intended as a byproduct of Edison’s efforts to “play back” recorded telegraph messages and to automate speech sounds for transmission by telephone. The recordings of the first phonograph generally consist of wavy lines that are scratched onto a rotating cylinder wrapped with tin foil. As the cylinder rotates, a stylus or needle traces the wavy lines and vibrates to reproduce the recorded sound waves.

“I never did anything worth doing by accident, nor did any of my inventions come indirectly through accident, except the phonograph. No, when I have, fully decided that a result is worth getting, I go about it, and make trial after trial, until it comes.”
— Thomas A. Edison, quoted by Theodore Dreiser in A Photographic Talk with Edison, Success magazine (February 1898).

On the first sketch of the invention Edison set the piece-work price to $18. He was in the habit of marking the price he would pay for the work on each sketch. If the workman carrying out the sketch failed, he would pay only his regular wages; if he made more than the wages, he kept it. Actually, Edison didn’t have much faith that his device would work. The workman John Kruesi, when nearly finished it, asked what it was for. Edison told him that he was going to record talking, and then have the machine talk back. Kruesi thought it absurd.

“However, it was finished, the foil was put on; I then shouted ‘Mary had a little lamb‘, etc. I adjusted the reproducer, and the machine reproduced it perfectly. I was never so taken aback in my life. Everybody was astonished. I was always afraid of things that worked the first time. Long experience proved that there were great drawbacks found generally before they could be got commercial; but here was something there was no doubt of.”
— Thomas A. Edison

The Euphonia – A Serious Competitor

Actually, there was a lot of competition, first and foremost the Euphonia language machine by the Freiburg mathematician Joseph Faber. Faber presented the machine in Vienna in 1840, later travelled to the USA, where he was unsuccessful with the invention and took his own life in 1866.

Why the Disc has won the Race

Believe it or not, Edison first saw the device only working in offices as a dictation machine. He didn’t think of recording music and playing back music for enjoyment. This was also due to the fact that also when the device was improved by using wax cylinders, each single cylinder had to be recorded by real music, without the possibility of scaling up to mass production. Mass production first was possible by the use of discs as recording medium. Discs as being used by the gramophone are not inherently better than cylinders at providing audio fidelity. Rather, the advantages of the format are seen in the manufacturing process: discs can be stamped; cylinders could not be until 1901-1902 when the gold moulding process was introduced by Edison. But, as we know by today, the disc has won the race.[5]

One of the first demonstrations of the new device was for the popular science publication “Scientific American”:

“In December, 1877, a young man came into the office of the SCIENTIFIC AMERICAN, and placed before the editors a small, simple machine about which very few preliminary remarks were offered. The visitor without any ceremony whatever turned the crank, and to the astonishment of all present the machine said : ” Good morning. How do you do? How do you like the phonograph?” The machine thus spoke for itself, and made known the fact that it was the phonograph…”
— Scientific American, July 25, 1896

However, the improved wax roller phonograph introduced by Edison at the end of 1887 was called The New Phonograph. Edison used rolls made of a special 5-6 millimeter thick paraffin wax. This significantly improved sound quality and reduced wear and tear during playback. In addition, the wax rollers could also be ground and reused. From 1893 onwards, pantographic 1:1 copying machines were often used for Edison’s wax rollers. Previously, wax rollers had to be recorded individually or in groups of four to ten phonographs. As early as 1889 Edison was engaged in a casting process as a duplication, but initially without success. It was not until around 1898 that this process was put to practical use in small series of rollers, which were then reproduced for sale as high-quality originals with conventional copying machines. It was not until 1902 that Edison replaced the copied rolls with the gold casting process, also known as chilled casting. Since the rollers no longer had to be played on directly, it was possible to use a harder wax that did not wear out as quickly as the brown wax used up to then.

In the autumn of 1929, Edison had to give up the entire production of phonographs as a result of the global economic crisis, thus ending the era of the phonograph as an entertainment device. Dictaphoneographs remained on the market in the USA for office use until the 1950s.