You are here: Home › explorer › Gustav Nachtigal and the Explorations in Africa 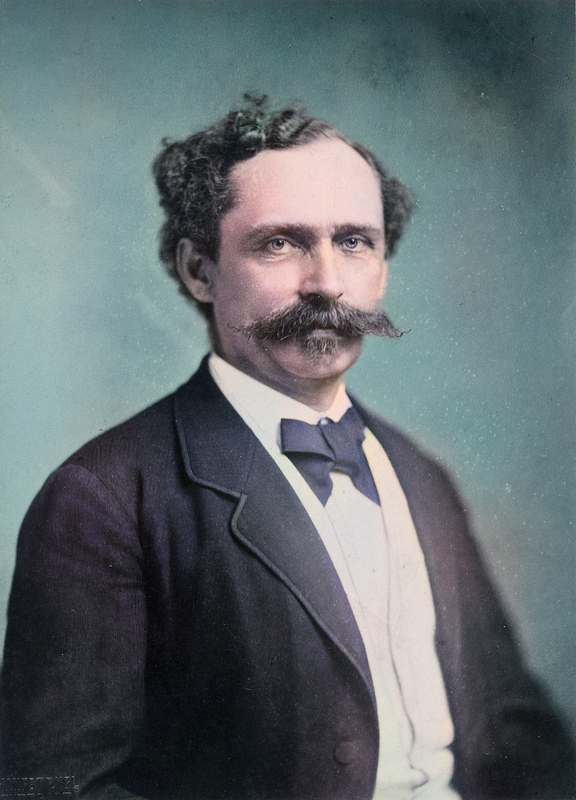 On February 23, 1834, German Africa Explorer Gustav Nachtigal was born. He is further known as the German Empire’s consul-general for Tunisia and Commissioner for West Africa. His mission as commissioner resulted in Togoland and Kamerun becoming the first colonies of a German colonial empire. making him a key figure in German colonial propaganda

Gustav Nachtigal’s father, the priest Carl Friedrich Nachtigal, died of lung consumption as early as 1839. After his father’s death Gustav Nachtigal grew up in Stendal, where he attended the Winckelmann-Gymnasium. Nachtigal studied medicine in the German cities Halle, Würzburg and Greifswald. In 1858, he was appointed physician in the Prussian military and was positioned in Cologne. In order to be able to recover from a tuberculosis infection, Nachtigal relocated to northern Africa, first living in Algeria and later in Tunis. There, Nachtigal became the personal physician of the Bey and learned Arabic.

In 1868, Gustav Nachtigal met the researcher Gerhard Rohlfs. Rohlfs was commissioned by King Wilhelm I of Prussia to carry gifts to Umar of Borno, sheik of the Bornu Empire, in acknowledgment of kindness shown to German travelers, such as Heinrich Barth. Rohlfs appointed Nachtigal with the task. The journey started in 1869 from Tripoli and Nachtigal traveled across the Sahara and reached the region of the Toubou. It is believed that no European had entered the region before Nachtigal. However, the first encounter didn’t really turn out well for Gustav Nachtigal and he had to flee to Murzuk where he spent the winter and also met the Dutch researcher and explorer Alexandrine Tinné.

Nachtigal reached Kukawa where the Sultan of Bornu had his residence. After delivering the gifts from King Wilhelm I of Prussia Nachtigal continued his journey towards the KanemRegion and Borkou. Nachtigal set off from Tripoli on 17 February 1869, crossed the Sahara, stayed in Fessan and then went to the Tibbu region, the land of Tibesti, which had not been entered by any Europeans before. But the Tedas living there threatened nightingale with death and robbed him, so that he had to flee to Murzuk, where he spent the winter. Unlike other African explorers, he did not use this experience to defame the Africans, but tried to understand why the Tibbu had seen him as a hostile invader.

Nachtigal returned to Kukawa in January 1872. In the following two years, Gustav Nachtigal traveled to the region today known as the country Chad and the regions Darfur and Kurdufan. Nachtigal learned several languages and collected scientific data on the cultures of the African people, pioneering in the field of modern ethnography. In contrast to several other European scientists, Nachtigal intended to describe the cultures he saw as objectively as possible without defaming the people on purpose. In 1875, Gustav Nachtigal returned to Germany.

Gustav Nachtigal published his works after returning from Africa successfully. In 1882 Otto von Bismarck, back then Reich Chancellor, announced Gustav Nachtigal as consul general in Tunis. Two years later, Nachtigal was appointed commissioner for Germany-Westafrica and thus included in the German colonial politics. It is believed that Nachtigal did not enjoy this position and only agreed to it to end slavery in Africa. Nachtigal traveled to Kapitaï and Koba as well as to the Gulf of Guinea. He put several regions under the protection of Germany, including parts of Togo, Ghana, and Kamerun.

On his way back to Europe he fell ill with tuberculosis. He died on 20 April 1885 on board the gunboat SMS Möwe. On 21 April 1885 he was buried on Cape Palmas. Gustav Nachtigal is regarded as the other great German explorer of Africa, in company with Heinrich Barth. Like Barth, Nachtigal was primarily interested in ethnography, and additionally in tropical medicine. Despite his critical attitude towards German colonial acquisitions, Gustav Nachtigal was stylized as a colonial hero in the German press. His works stand out because of their wealth of details and above all because of his unbiased views of Africans. In contrast to most contemporary explorers, Nachtigal did not hold to the alleged inferiority of Africans; his convictions are clearly reflected in his descriptions and choice of words.