You are here: Home › physics › Maria Goeppert Mayer and the Nuclear Shell Model 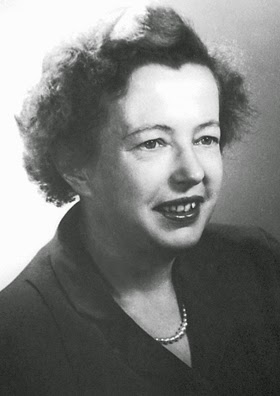 On June 28, 1906, German-born Physicist Maria Goeppert Mayer was born. She was awarded the Nobel Prize in Physics for proposing the nuclear shell model of the atomic nucleus. She was the second female Nobel laureate in physics, after Marie Curie.

“Mathematics began to seem too much like puzzle solving. Physics is puzzle solving, too, but of puzzles created by nature, not by the mind of man.”
— Maria Goeppert-Mayer, as quoted in [11]

Maria Goeppert was born in Kattowitz, a city in Prussia, the only child of Friedrich Goeppert and his wife Maria. At age 4, she moved with her family to Göttingen when her father was appointed as the professor of pediatrics at the University of Göttingen. Goeppert was educated at the Höhere Technische Schule in Göttingen, a school for middle-class girls who aspired to higher education. In 1921, she entered the Frauenstudium, a private high school run by suffragettes that aimed to prepare girls for university. This school closed its doors during the economic inflation, but the teachers continued to give instructions to the pupils. Maria Goeppert finally took the abitur examination in Hannover, in 1924, being examined by teachers she had never seen in her life.

Mathematics and Theoretical Physics in Göttingen

In the Spring of 1924, Goeppert entered the University of Göttingen, where she studied mathematics. A purported shortage of women mathematics teachers for schools for girls led to an upsurge of women studying mathematics at a time of high unemployment, and there was even a famous female professor of mathematics at Göttingen, Emmy Noether.[3] But, most girls were only interested in qualifying for their teaching certificate and not in scientifc research. But, soon Maria Goeppert found herself more attracted to physics than to mathematics. This was the time when quantum mechanics was young and exciting. Thus Goeppert chose to pursue a Ph.D. in theoretical physics. In her 1930 doctoral thesis she worked out the theory of possible two-photon absorption by atoms. There were three Nobel Prize winners on the doctoral committee, Max Born,[4] James Franck and Adolf Windaus. Nobel Laureate Eugene Wigner [5] later described the thesis as “a masterpiece of clarity and concreteness“. At the time, the chances of experimentally verifying her thesis seemed remote, but the development of the laser permitted the first experimental verification in 1961 when two-photon-excited fluorescence was detected in a europium-doped crystal. To honor her fundamental contribution to this area, the unit for the two-photon absorption cross section is named the Goeppert Mayer (GM) unit.

United States and the Manhattan Project

Shortly before she had met Joseph Edward Mayer, an American Rockefeller fellow working with James Franck. In 1930 she went with him to the Johns Hopkins University in Baltimore. This was the time of the depression, and no university would think of employing the wife of a professor. But she kept working, just for the fun of doing physics. There was little interest in quantum mechanics at Johns Hopkins, but Goeppert Mayer worked with Karl Herzfeld, collaborating on a number of papers. In 1939, Mayer took up a position at Columbia University, where the chairman of the Physics Department, George Pegram, arranged for Goeppert Mayer to have an office, but again she received no salary. Nevertheless, she had the chance to work together with physicist Enrico Fermi.[6] In December 1941, Goeppert Mayer took up her first paid professional position, teaching science part-time at Sarah Lawrence College, and soon after she joined the Manhattan Project, where she researched the chemical and thermodynamic properties of uranium hexafluoride and investigated the possibility of separating isotopes by photochemical reactions. In February 1945, Goeppert Mayer decided to join Edward Teller’s research group at the Los Alamos Laboratory.[7]

The Shell Model and the Nobel Prize in Physics

“The shell model, although proposed by theoreticians, really corresponds to the experimentalist’s approach. It was born from a thorough study of the experimental data, plotting them in different ways, and looking for interconnections.”
— Maria Goeppert-Mayer, The Shell Model, Nobel Lecture.

While working with Edward Teller on the origin of the elements, which required the compilation of isotope lists, she noticed that atomic nuclei with 2, 8, 20, 28, 50, 82, or 126 protons or neutrons were particularly common and therefore stable. These numbers were later called magic numbers by Eugene Wigner. This had already been observed before and reminded us of the shell structure of the electrons in the atom. However, it was mainly assumed that a shell model in the atomic nucleus was not possible, firstly because of the success of the liquid drop model for atomic nuclei (Niels Bohr and others), which described the atomic nucleus as a liquid with collective motion of the nuclear particles, and secondly because the strong interaction was much stronger than the electromagnetic interaction of the electrons in the atom. However, Maria Goeppert-Mayer found support for the shell model in other nuclear properties, about which she first published in Physical Review in August 1948. However, a central force like the Coulomb force for the electron shells in the atom was out of the question if one went beyond 20 nucleons in the nucleus. Enrico Fermi asked her if a spin-orbit coupling of the strong interaction was not an option, and this proved to be the solution to the problem. She sent her work to Physical Review, where it appeared in 1949. When she found out that Hans Jensen and colleagues in Germany had also found this solution, she tried to delay publication so that the work could appear side by side in Physical Review, but this was no longer possible and her work was published in the following issue. Jensen did not know her before, but met him later, and a friendly collegial relationship developed between them. In 1963, Goeppert Mayer, Jensen, and Wigner shared the Nobel Prize for Physics “for their discoveries concerning nuclear shell structure.” She was the second female Nobel laureate in physics, after Marie Curie.