You are here: Home › chemistry › Hans von Euler-Chelpin and the Alcoholic Fermentation of Sugar 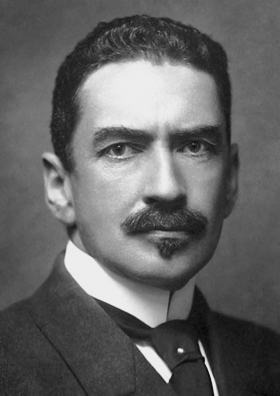 Hans von Euler-Chelpin was the son of the later Bavarian Major General Rigas von Euler-Chelpin (1837-1923)and his wife Gabriele Furtner († 1931). He spent most of his childhood with his grandmother in Wasserburg am Inn. He went to the royal secondary school in Augsburg, followed by Würzburg and Ulm and passed the Abitur at the Wilhelmsgymnasium Munich in 1891. He volunteered in the Bavarian first Field Artillery Regiment and after one year in 1891, he began studying art at the Munich Academy of Painting and was taught by the German artist Ludwig Schmid-Reutte. Euler-Chelpin then went to attend the University of Berlin to study chemistry under Emil Fischer, and physics under Emil Warburg and Max Planck. Hans von Euler-Chelpin received his doctorate degree in 1895. with a thesis on “About the action of molybdenum trioxide and paramolybdates on normal vanadates, and a new method for the determination of vanadium pentoxide and molybdenum trioxide next to each other“.

However, already around 1905, von Euler-Chelpin began to study he first phases of fermentation and their catalysis. In his work, Hans von Euler-Chelpin paid special attention to co-zymase and along with his collaborators, the scientist was able to clarify its structure. During the 1920s von Euler-Chelpin began studying vitamins and along with his collaborators including Paul Karrer and Margareta Rydbom he carried out a study of the marked vitamin A activity of carotene. At the Institute established in Stockholm by the Wallenberg and Rockefeller Foundations, von Euler-Chelpin’s work on fermentation and general enzyme chemistry was continued with special attention being given to the use of enzyme chemistry for the study of heredity and the blood serum.

Jointly with Arthur Harden, Hans von Euler-Chelpin was awarded the Nobel Prize for Chemistry for his work on alcoholic fermentation. Euler-Chelpin managed to describe what happens in sugar fermentation and the action of fermentation enzymes using physical chemistry. This explanation led to the understanding of the important processes taking place in the muscles for the supply of energy.

Already in 1914, von Euler-Chelpin had published a work on the chemistry of yeast and alcoholic fermentation. One decade later he managed to ambody the results of his research in enzymology in his monograph entitled Chemie der Enzyme, which was the first modern monograph on this subject. When he retired, his main focus was on cancer research. During the 1950s, von Euler-Chelpin collaborated on a book on the chemistry and biochemistry of reductones. Hans von Euler-Chelpin traveled to Japan during the 1950s, collaborating on a monograph on the reductones in collaboration with Professor K. Yamafuji and Drs. Namura and Adachi.

Hans Euler-Chelpin became the husband of Astrid Cleve, the daughter of the Uppsala chemist Per Teodor Cleve. Euler-Chelpin was the great-great-great grandson of Leonhard Euler [4] and his son Ulf von Euler, was awarded the Nobel Prize in Physiology or Medicine in 1970.