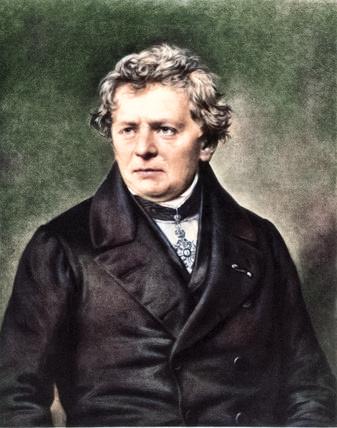 On July 6, 1854, the Bavarian physicist and mathematician Georg Simon Ohm passed away, he was best known for his research on electricity and it was him to initiate the subject of circuit theory. The SI unit of electrical resistance and Ohm’s law are named after this Bavarian ‘teacher’.

“The design of this Memoir is to deduce strictly from a few principles, obtained chiefly by experiment, the rationale of those electrical phenomena which are produced by the mutual contact of two or more bodies, and which have been termed galvanic; its aim is attained if by means of it the variety of facts be presented as unity to the mind.”
– Introductory sentence of Georg Simon Ohm (1891). The Galvanic Circuit Investigated Mathematically,

Ohm came from an old bourgeois family who had passed the locksmith trade from father to son for many generations. His father Johann Wolfgang returned to Erlangen after ten years of wandering as a journeyman, acquired the master’s right in 1785 and married Elisabeth Maria Beck. He also devoted himself to the study of mathematics and Kant’s philosophy. His father introduced his two sons Georg Simon and Martin (1792-1872), who, contrary to family tradition, were allowed to attend grammar school, to mathematics at an early age and taught them mathematics himself. At the age of fifteen Georg Simon Ohm underwent a five-hour examination by the mathematics professor Karl Christian von Langsdorf, who confirmed his extraordinary talent and far above-average knowledge in the field of mathematics. The professor was so impressed that in the final sentence of his expert opinion he expressed the hope that a new pair of Bernoulli brothers would emerge from the master locksmith’s family.

Career as a Teacher

In 1805 Georg Simon Ohm began studying mathematics, physics and philosophy at the Friedrich-Alexander-University Erlangen at the age of 16. Because of financial difficulties he had to stop studying after one year and went as a mathematics teacher to a private school in the former Gottstatt monastery in Switzerland. At the age of 22 he returned to Erlangen, where he received his doctorate in 1811 with a thesis on light and colours and worked in Erlangen for three semesters as a private lecturer in mathematics. In 1812 he became a teacher at the Realschule in Bamberg, in 1817 a teacher of physics and mathematics at the Jesuitengymnasium (Dreikönigsgymnasium) in Cologne and in 1826 at the Kriegsschule in Berlin.

Ohm’s intention was to develop a formula dealing with the effects of flowing electricity and its measurability in dependence on the material of wire. Doing this, he succeeded in finding the famous law named after him. In his experiments he used voltaic piles, batteries made from daniell cells, and a voltage source, which was also made from daniell cells. In the early 19th century, Ohm published an article describing a measuring device. All he did was basically reconstructing and modifying discoveries of other scientists and combining them to a whole new device (…everything is a remix!). But his experiments were still unsuccessful, because of the enormous fluctuations of the electric power. After an important hint by Thomas Johann Seebeck, Ohm added a thermocouple to his experiment and succeeded. He published his today well known law, but didn’t gain a whole lot of respect. The German Minister of Education even said, that ‘a physicist who professed such heresies was unworthy to teach science’. By then, Ohm was ‘just’ a teacher and could not blare with a great reputation. This was the reason, why it took almost 10 years to get the law widely accepted throughout Germany and even longer abroad.

In 1833 Georg Simon Ohm became professor at the Royal Polytechnic School in Nuremberg, which he also headed as director from 1839 and which bears his name today (Nuremberg Technical College Georg Simon Ohm). In 1849 he moved to the University of Munich, where he initially held an extraordinary professorship and from 1852 a full professorship in experimental physics. Among his students were the mathematician Peter Gustav Lejeune Dirichlet and the astronomer Eduard Heis. Although Ohm could not impress the masses with his studies first he has later been honored by the Royal Society and became a member of the Bavarian Academy nine years before his passing in 1854.