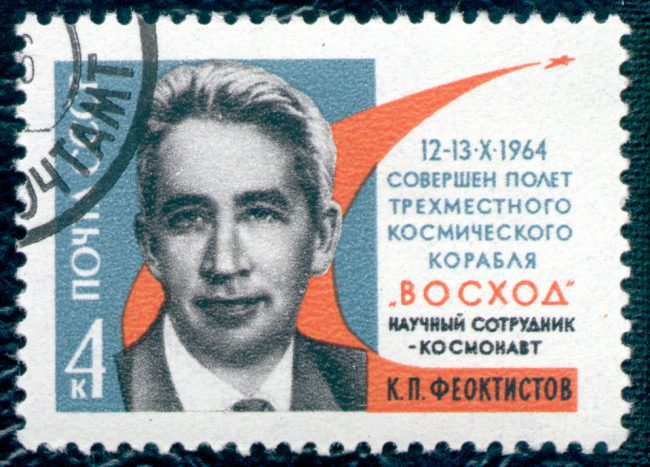 On February 7, 1926, Soviet cosmonaut and an eminent space engineer Konstantin Petrovich Feoktistov was born. Feoktistov was part of the team that would go on to design the Sputnik, Vostok, Voskhod, and Soyuz spacecraft under the leadership of Sergey Korolev.[1] He trained as a cosmonaut, and eventually launched 12 Oct 1964 for 16 earth orbits as one of the crew of Voskhod 1 (with Vladimir Komarov and Boris Yegorov), the world‘s first multimanned spaceflight.

Feoktistov first attended a high school. In 1942, when the front approached his hometown Voronezh, he volunteered for the Red Army at the age of 16 and served as a scout.When he was only 16 years old, Konstantin Feoktistov fought with the the Soviet Army against the German troops when they occupied Voronezh. Feoktistov was captured by the Waffen-SS and was sentenced to death by a firing squat. However, the bullet went right through his neck and and fortunately failed to kill him. Feoktistov managed to feign death and later escaped from a burial trench.

Only after the end of the war could Feoktistov continue his school education. He attended the Bauman Moscow Higher Technical School and studied engineering. Feoktistov graduated in 1949 and later also earned a doctorate degree in physics in 1955. Feoktistov joined the OKB-1 design office, which was headed by Soviet missile designer Sergei Korolev. In the department of Mikhail Tikhonravov he worked on the construction of the first Soviet satellite Sputnik, which was launched in October 1957.[9] From 1956 he also worked on designs for manned spacecraft, which eventually led to the development of the Vostok spacecraft. Other designs from this period were an ion-powered Mars spacecraft and a lunar orbit spacecraft. Feoktistov was one of the leading designers of the Vostok spacecraft. Before each flight in the years 1961 to 1963 he introduced the cosmonauts to the operation of the systems and possible emergency measures. For further space flights, the Vostok spacecraft was converted from a single-seater to a multi-seater. The seating direction was turned and additional solid rockets were mounted so that the crew could remain on board for landing. This type received the name Voskhod space capsule. 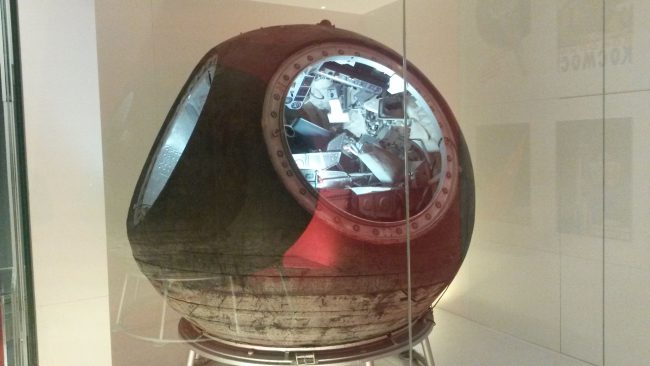 Korolev was committed to ensuring that not only military pilots were deployed as cosmonauts, but also civilian engineers in his design department. He nominated 14 candidates, six of whom were shortlisted in May 1964, including Feoktistov. Korolev wanted to have Feoktistov on the crew for the first manned Voskhod flight because he knew the spaceship from the ground up. Nikolai Kamanin, the head of cosmonaut training, had doubts about Feoktistov’s health. In particular, Feoktistov’s eyesight was severely impaired, so that he was only assigned to the substitute team. Korolev was finally able to assert himself, not least because Feoktistov’s rival, Georgi Katys, was no longer an option for political reasons.

Staying in the Cosmonaut Program

Feoktistov became the first civilian to make a space flight, and the only cosmonaut in the Soviet Union who was not a member of the Communist Party of the Soviet Union. In contrast to Yegorov, Feoktistov remained in the cosmonaut corps and tried to come to another space flight. He became a controversial personality. On the one hand he was supported by Korolev and later by his successor Mischin, on the other hand he met strong resistance from Kamanin and the cosmonauts due to his limited health. Although Kamanin also had reservations against other OKB-1 engineers, after appropriate training these received however starting from 1969 assignments to space flights, but not Feoktistov. Feoktistov made later still further attempts to come to another space flight. In 1971 he was under discussion as crew for the second DOS space station, but was not shortlisted. From May to October 1980 he trained together with Leonid Kisim and Oleg Makarow for flight Soyuz T-3, but was taken off the crew for health reasons and replaced by Gennady Strekalov.

In 1969, Konstantin Feoktistov and Georgi Beregovoi traveled across the United States including Disneyland in California. The astronauts Eugene  Cernan [2] and Neil Armstrong [3] accompanied them and Kirk Douglas hosted receptions for then in Hollywood. On October 28, 1987, Feoktistov finally retired from the cosmonaut corps, 23 years after his only space flight. He continued to work in the design office, which has since been renamed RKK Engerija. In 1990 he changed as a professor to the Moscow State Technical University Bauman, until he retired in 2005.

On 21 November 2009 he died in Moscow at the age of 83. At that time he was the oldest living Soviet cosmonaut.